Everyone is a fan of something. Whether it’s a sports team, celebrity, or television show there is at least one thing that a person enjoys to partake in, talk about, etc. Yet when does becoming too much of a fan – or a fanatic – become a problem? This question raises concern because recently many different fan bases or fandoms of certain movies, books, etc. have been criticized over the last decades due to their extreme dedication and obsession. Some people think that these fan bases and their lifestyles are unhealthy, that these fanatics choose to avoid reality and instead dedicate their life to something that does not return anything rewarding or productive to society.

Don't use plagiarized sources. Get your custom essay on
“ Fandom in Popular Culture ”
Get custom paper
NEW! smart matching with writer

Trekkies attending conventions and spending money on elaborate costumes, Harry Potter fans dressing up like the characters to attend a movie premiere, internet bloggers spending time writing fan fiction online for hours – are all these forms of fandom unhealthy? In my personal opinion, I do not believe so.

When it comes down to it, each fandom has a similar ground base that it builds off of, it also promotes a sense of identity and camaraderie, it’s a form of enjoyment that encourages happiness and optimism but also is an institution that is exploited by the media.

Each fandom seems completely different from each other. I know many Harry Potter fans who despise anyone who likes Twilight, thinking that their fan base is so much superior and vice versa. In reality though, each fandom has the same concept to build off of that creates such a huge fan base.

This concept is escapism or rather that fandom is distraction from real life and its hardships (Reilly). An example would include myself in that I would much rather choose to read Harry Potter than instead, for instance, write this paper. The same goes for my roommate who chose to watch the Walking Dead instead of doing her homework. In those moments we temporarily escaped our problems and challenges in real life and instead immersed ourselves into another reality that was much more enjoyable.

Would that be considered unhealthy? I think not – the problem was not me being a fan of Harry Potter but instead self-control, which differs with each person individually. That’s why we cannot generalize all fanatics of something as being unhealthy because although they choose to incorporate many aspects of their fandom into everyday life, there are many instances when they can productive instead of idle. This includes a dentist from the movie Trekkies that created a dentist office that completely revolves around the television show Star Trek. The dentist/fanatic gets to be immersed in Star Trek all day long at his job, but is actually being productive in society. With that, any direction a fan base goes, it is a form of escapism from real life but is not necessarily detrimental to a fanatic’s well being.

Fandom also creates a sense of camaraderie and identity to those who partake in it. By identifying yourself as a fan, you become apart of a community who share similar interests (Jacobson). An example includes my stepfather who is Redskins football fan. He and his friends bond over their love for the team, but are also a part of a huge community who share this love. The best part is that the Redskins fandom allows the fans to be a part of the game without having any football skills at all and it has a very low cost to participate. With this comes a sense of belongingness and camaraderie – that you are a part of something bigger than yourself. This can be very beneficial to the fans and can be applied to every fandom. This sense of community and identity helps with self-esteem and image (Jacobson), which, in my opinion, should not be considered unhealthy.

In its most basic form, being a fan of something just makes people happy. The reason why I love reading the Harry Potter books repeatedly or why a Trekkie will attend numerous conventions is because doing it makes us happy – it does not make us obsessive, crazy fanatics. According to the mood management theory, individuals seek out media content that they expect to improve their mood (Burns). Millions of people do not become fanatics of something purely for the enjoyment of it but rather because it has a positive effect on their mood. This explains many fanatic behaviors, like fan fiction for instance. This is when a fan will write their own version of the story, movie, video game etc. that caters to their own desires. They do this because it makes them happy and makes them feel apart of the fandom community.

On the other hand, there are many instances where fandom or fanaticism can be taken to the extreme. There are numerous stories of when fans at football games break out into a violent riot, or when a fan physically harms others or themselves to attract attention to themselves – an example including Mark David Chapman, a Beatles fan, murdering John Lennon. But is it really their fanaticism to be blamed? This question should be asked due to the fact that many aspects can influence a person’s decisions, one being their psychological stability.

Being a fanatic did not make Chapman a murderer; it was that he was mentally ill. A more important aspect is that according to a concept called entertainment theory, we as audience members do not question the content we consume because “we are just doing what feels good…its only entertainment” (Burns). Yet in reality we the audience that consumes the media are not aware of the content that we are looking at. If Chapman had not been exposed to John Lennon’s life being broadcasted through the media he may not have taken his fanaticism to the extreme level. Fanaticism should not be considered unhealthy since the media that we consume contributes or rather enhances fanaticism to an unhealthy level.

Like I said before, we are all fans of something. Whether or not we choose to take our passion for that something to a fanatic level depends on many factors. Psychologically we indulge in our fandom because it makes us happy. The feeling of intimacy and community is a basic human need that fandom provides through online blogging and fan fiction, dressing up like someone we’re not, conventions, etc.

Also the way that the media broadcasts and streams pop culture to the general public is something to consider when criticizing fanatics. Finally, each fandom, although diverse in its own way, has the same ideal at it’s root in that people become fans because it provides an escape into another reality that does not our problems and hardships to deal with. Overall, fanaticism should not be considered unhealthy because it is a natural psychological instinct as well as a basic institution has been heightened by the media. 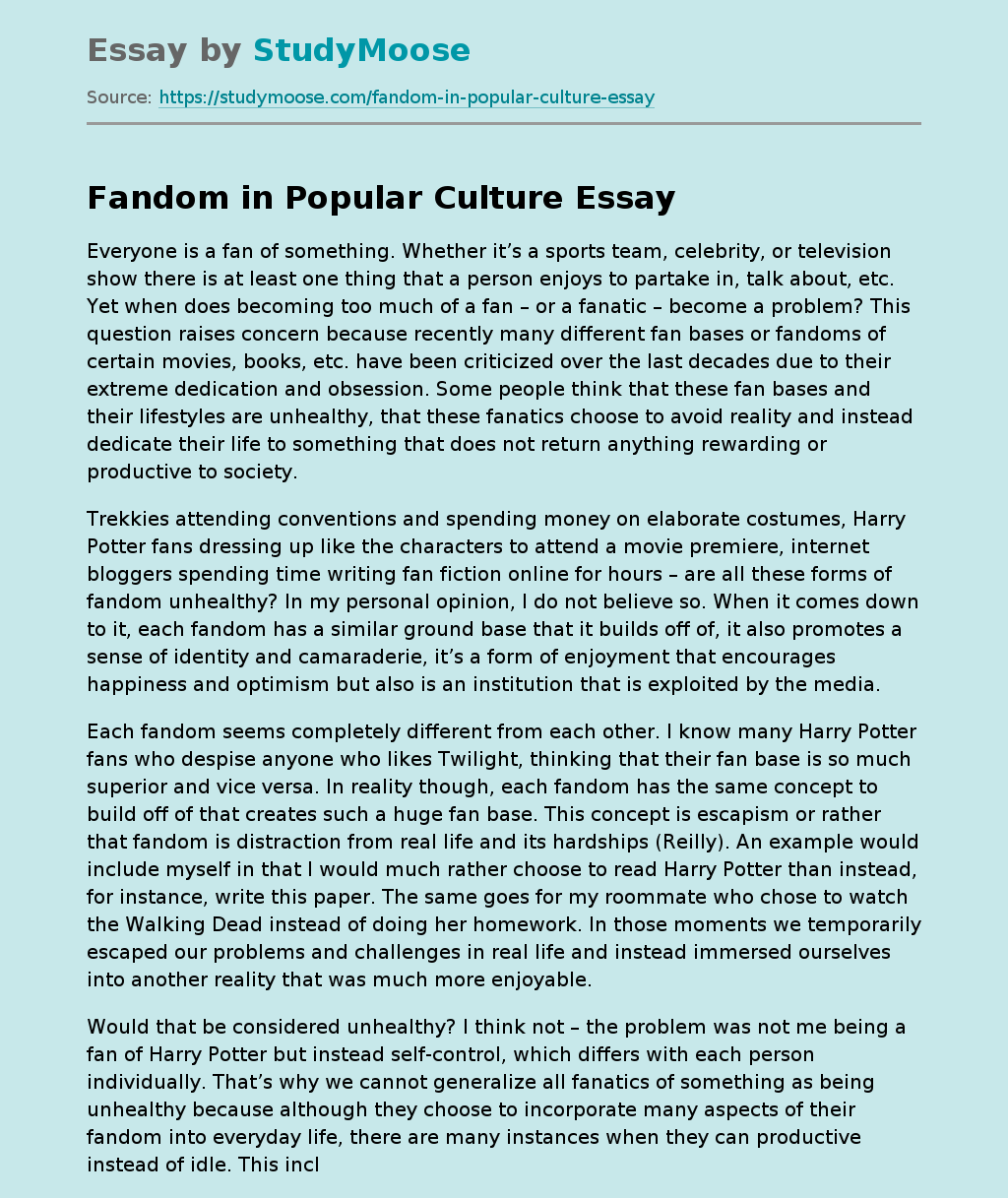