Margaret Walker’s novel Jubilee focuses on the life of a slave girl by the name of Vyry who gains her freedom at the end of the Civil War and sets out with her children, Minna and Jim, and husband, Innis Brown, to make a new life for their family in the Reconstruction Period. Walker’s awareness of the southern plantation tradition is made clear throughout Jubilee in the way that she debunks the negative tropes placed on the shoulders of African Americans by the nostalgic white writers of the South; Walker also incorporates her knowledge of black oral tradition by way of small snippets of text on every page which marks the start of a new chapter in the text.

Don't use plagiarized sources. Get your custom essay on
“ Plantation and Oral Tradition in Margaret Walker’s Jubilee ”
Get custom paper
NEW! smart matching with writer

The first section of Jubilee covers the antebellum years, before the Civil War ripped the southern United States apart. Traditionally, a plantation narrative is narrated from the perspective of a slave, frequently portrayed as “happier and better off under slavery than they would be if they were free” and established the stereotypical “happy darky” (Campbell).

“The happy-go-lucky darky images of the antebellum South could be contrasted favorably to the images of impoverished, potentially dangerous blacks of post-Reconstruction.” (Warren, 119).Walker fractures this trope by incorporating her ancestors’ harsh treatment on a real plantation. The plantation tradition has the enslaved narrator holding the plantation in high esteem, as if it were a golden utopia, when in reality slaves face inevitable punishment and death; they are neither happy nor enjoying the treatment delivered to them by their masters.

Walker shows this through the story arc of Lucy, one of Master John’s slaves and friend of Vyry. Lucy tries to escape, but is caught and branded with an “R” on her face for “runaway.” Determined to take her freedom into her own hands, she learns to cover her mark with makeup, “a mixture of yellow ochre, red clay, and charcoal, until it had blended into her skin” (Walker, 127). Lucy runs away again, and is successful in reaching the free North.

Even when slaves do stay on the plantation and follow orders, they are still vulnerable to abuse from their overseers. Plantation tradition usually upholds the Master’s orders in a place of highest priority, another trope that Walker breaks in Jubilee. Shortly after Lucy ran away the second time, Master John had “plainly told [Uncle Plato and Uncle Esau] and Mr. Grimes that they were not to go into the fields anymore” (Walker, 132) because they were too old for that kind of hard labor.

Grimes, the overseer, went against Master John’s decision again and ordered them both back out into the fields. “In less than an hour in the blazing sun the two old men had collapsed in the fields, overcome by the heat and unaccustomed exertion” (Walker, 133). Uncle Plato and Uncle Esau took refuge in an abandoned slave cabin that was burned down while the two men were sleeping. “There was a big mix-up over whether [Grimes] actually ordered his guards to burn that particular house or another” (Walker, 134), but Master John and the rest of the slaves did not believe that it was an accident.

After these usurpations and his wife Salina’s casual brushing-off of Master John’s claim to authority on the plantation, Caline observes that “his say-so don’t amount to nothing” (Walker, 136). Margaret Walker’s use of the black oral tradition crops up throughout Jubilee in the way she incorporates spirituals, sayings, prayers, and hymns into the beginning page of each chapter. One of the main purposes of oral tradition is to pass down the history of the race, since there were no written history books for their culture.

“The oral tradition of the African societies and the necessity for oral traditions as a result of the slave system has helped the Black culture survive” (Staggers). History books talk of slaves singing spirituals and hymns in the fields as a way to boost morale, and it was common practice, even enforced by law, for slaveholders to not grant their slaves an education, resulting in a slave’s inability to read and write. Walker uses snippets from such songs or texts to foreshadow the theme or struggle of their respective chapters. When Brother Zeke first speaks of God sending them a Moses, that chapter’s quote is “When Israel was in Egypt’s land / let my people go / Oppress’d so hard they could not stand / let my people go” (Walker, 18). Walker would also write Aunt Sally singing when she was working in the kitchens of the Big House. “When Aunt Sally was deeply troubled, she opened her mouth and raised a real wailing song over her cooking” (Walker, 71).

If slaves ever spoke out against their masters, they would face extremely harsh punishment and perhaps even death. Most of the people in the Big House would not recognize the singing as Aunt Sally expressing her discontent, but rather see it as just making noise. The oral tradition offers a freedom of expression that is disregarded and seldom if ever over-analyzed by the white oppressors they were singing out against. Through these songs and prayers igniting each new chapter of the rise and fall of the Confederacy through Vyry’s eyes, and the destruction of the tropes distorting the harsh reality of slavery throughout the entirety of Jubilee, Margaret Walker creates an accurate and emotional story that proves her knowledge of the literary traditions surrounding the truth of her ancestors that southern writer after writer in the Reconstruction Period had strived to suppress. Works Cited 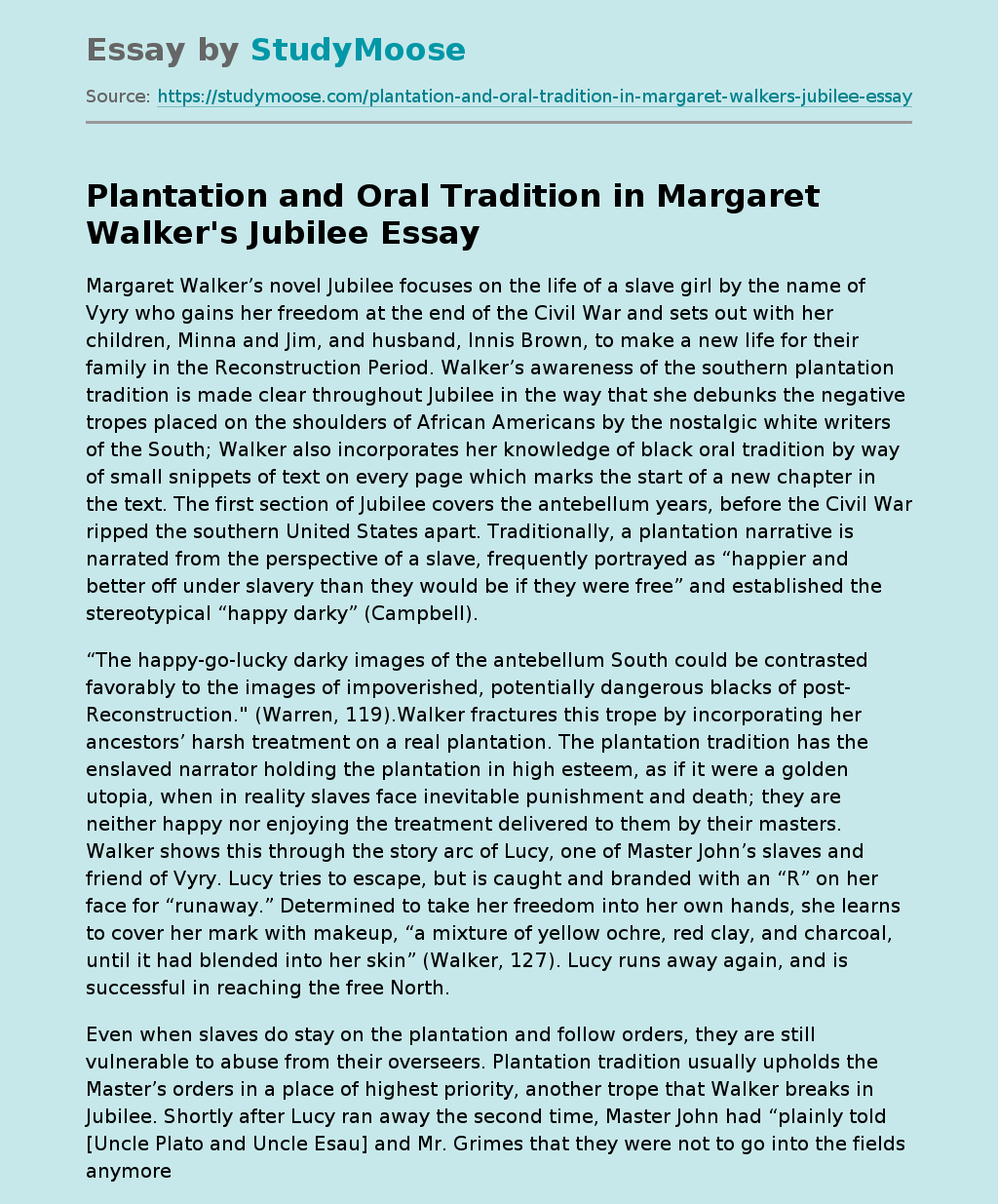