Even at this early stage in the story the reader can see something special in Pip. He was the only one out of six boys to survive birth and is now fending for himself. To the reader it is obvious that Pip is a loner and doesn’t stand up for himself very much, he’ll just get bossed around by his sister, by Miss Havisham, by Estella and Magwitch. In the third paragraph Dickens really wants the reader to understand just how alone and sad Pip is.

Don't use plagiarized sources. Get your custom essay on
“ Pip in “Great Expectations” by Charles Dickens ”
Get custom paper
NEW! smart matching with writer

He does this by describing Pip as a bundle of shivers rather than a little boy.

“And that the small bundle of shivers growing afraid of it all and beginning to cry, was Pip. ” This sentence gives the reader an image of Pip shaking, wanting somebody to protect him. Dickens uses his settings as a base for feelings. His choice of setting reflects the situation. In extract one Magwitch threatens Pip with death right in front of all his families’ graves, which is sort of ironic.

The whole situation is a cause to give Pip sympathy. Dickens describes Magwitch with longer descriptions first and then short one-word descriptions after.

This makes Magwitch’s faults seem to go on forever and it also makes him more frightening. “A fearful man, all in coarse grey, with a great iron on his leg. A man with no hat, and with broken shoes, and with an old rag tied round his head… who limped, and shivered, and glared and growled.

” The words Dickens uses to describe Pip are also very important. They are very emotive words such as, “Pleaded in terror” “trembling” “timidly explained” “to give me a greater sense of helplessness and danger” The way Pip’s speech is described is also a key point for sympathy.

Pip is very polite to his elders, using “sir” even when Magwitch is threatening to kill him, “There, sir! ” He is also shown to be nervous and scared by faltering and stammering his speech, “Goo-good-night, sir,” I faltered” This shows a very moral side of Pip, because even though he is terrified of this man he still says good-night to him. In extract one Dickens uses a repetitive technique to make the moment more tense. “You get me a file. ” He tilted me again. “And you get me wittles. ” He tilted me again. “You bring ’em both to me.

” He tilted me again. “Or I’ll have your heart and liver out. ” He tilted me again. ” This emphasizes the situation Pip is in. Pip is being bullied by this man who is repeatedly putting Pip in places of danger. The main object of this extract is to show the fear that this man has put into Pip, and also to illuminate how trusting and accepting Pip is. In extract two, Pip is meeting Miss Havisham and Estella for the first time. He has been called for by Miss Havisham to entertain her. When he meets Estella she makes him feel common and poor.

Extract two is written as Pip recollecting the meeting rather than Pip describing the meeting as its happening. Within the extract Dickens often writes what he thought at the time that it all happened, and what he would have thought knowing what would happen, “Sat the strangest lady I have ever seen, or shall ever see” By writing in this way, Dickens is emphasizing that even now Pip found that encounter very strange and odd. The reader also feels like they are being given snippets of Pip’s past. Extract two begins with Pips description of Miss Havisham’s house.

The first descriptions are simple things, “And found myself in a pretty large room” And then they become more specific, as if it is taking Pip a long time for things to sink into his small child mind, “A draped table with a gilded looking-glass” The objects described in the scene set-up the image of a dull, scary house. Certainly not the place for a child to be. Pip gains sympathy because going to this house is something that his sister has made him do for the specific reason of claiming an inheritance, not something he has chosen to do.

” By asking this rhetorical question Miss Havisham is showing that she is of more power than Pip. The reader knows that Pip must be afraid of her but is not allowed to say so. In that sentence Miss Havisham is also giving away to the reader a clue as to why she is how she is. Pip is very confused in this extract. He does not understand when Miss Havisham is talking to him, or when she requires an answer. He has to be very wary of himself and as the reader knows how young Pip is, they feel sorry for him. “I stopped, fearing I might say too much, or already had said it”

When Estella is brought into the scene she takes an instant dislike to Pip purely because he looks common, “With this boy! Why, he is a common labouring-boy! ” She only refers to Pip as “boy” or “this boy” in the scene. This shows that Estella also thinks she is of higher importance than Pip. After a game of cards with Estella, Pip feels very ashamed. He looks at things he used to consider normal as things that he is doing wrong. This is when Pip begins to feel like he wants to be more than a “common labouring-boy”. He also feels that Estella is right about him, and begins to agree,

“Her contempt for me was so strong, that it became infectious, and I caught it. ” This is upsetting for the reader because they know that Pip will not stand up to Estella and that gains him sympathy. Pip’s use of language suggests that he is unsure of himself and what he wants to do, “I think I should like to go home now. ” Although he is being given lots of responsibility this reminds the reader that he is still only a young boy. When Pip is given food the vocabulary used by Miss Havisham and Estella is very demeaning and degrading. “Estella, take him down.

Let him have something to eat, and let him roam and look about him while he eats. Go, Pip. ” Pip is referred to as “him” rather than by name even though he is in the room as they are having the conversation. The word “roam” also indicates something that an animal would do rather than a person. When Pip recognizes this fact, “As if I were a dog in disgrace. ” We instantly feel sorry for him because he knows that he is disliked by Estella. The main object in this extract is to show to the readers how rich people looked down on lower-class people.

Through-out this essay I have been looking at the ways in which Charles Dickens creates characters we can empathise with. I have found that the main ways he does this are by the descriptive language he uses to describe them, the use of language when his characters are interacting and also giving the reader a back-ground to his characters so they can feel more comfortable with the book. Dickens uses many techniques within these extracts such as rhetorical questions, repetition, listing descriptive language. 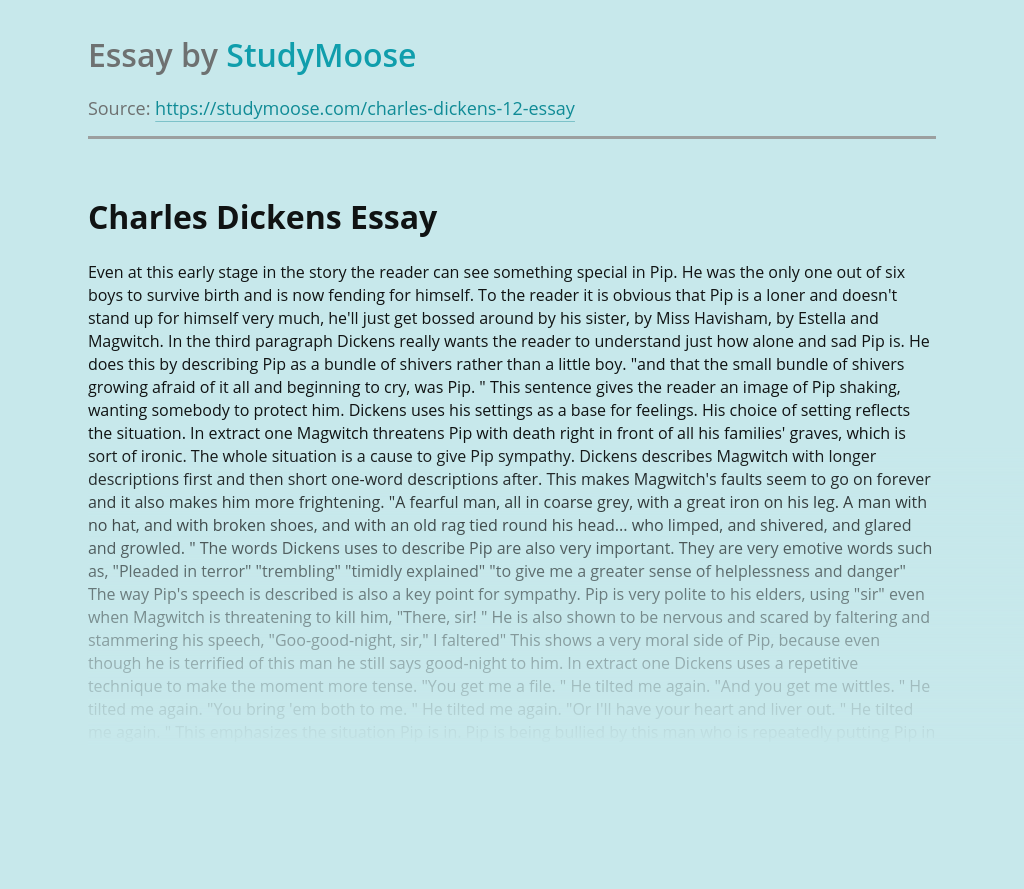