Phone addiction is a major world problem and it’s growing into a bigger problem everyday. The average adult spends more than 90 minutes per day on their phone (Yau) although this might not seem like it but in the long run it is, this is about 32,872.5 minutes per year and roughly 548 hours. And since the average lifespan in America per person is 78 years and the average person gets a phone at the age of ten to thirteen then the average person spends 2,169,585 minutes on their phone during their life.

Again this is a long time at about 36,159 hours, this just proves that people spend way to long on their phones. Companies take almost no responsibility in this drastically major world problem. Cell phone companies should take more responsibility in this major world problem. Cell phone companies should start helping by making new cell phones that are less addictive so people can spent more time doing productive things, so people are less distracted while driving, and so they can spend more time with loved ones.

If cell phone companies like Apple design new less addicting phones than people can spend more time doing what they should be doing and be more productive and not getting distracted by their phones. For example if someone is spending all day on their phone then they won’t really be able to spend time with people they care about. Even if that person is there with them and one of them is on their phone they won’t really be there, they will be sucked into their phone.

Every day about 660,000 people are using their phones while driving for texting and other distracting things. More than 1,000 people are injured every day because of distracted drivers. At least 9 people die everyday by a distracted driver and in 2015 42% of teens have said they have texted while driving (“Texting & Driving”). If phone companies took more responsibility in this problem and try to find a solution then the effects that phones have on lives would change and hopefully for the better. This shows that phones are a major problem and how many people are constantly checking their phones even if it puts theirs and other people’s lives in danger.

So many people spend most of their free time on their phones this is fine in a few cases. It isn’t fine if that person is on their phones while hanging out with friends and loved ones. Almost everyone has been there with your group of friends and that one person is constantly checking their phone. Most people hate it when this happens. You might be trying to explain something and then all of a sudden they have their phone out and they are texting not even listening to you. This can be really annoying you might keep telling them to stop but they keep doing it. The fault of this goes to both the person and the company. If companies would change the way their phones are made so they were less addicting than people would spend less time on them. The companies make the phone all bright and colorful so people will see them but it’s not really needed at all. Phones can be made so they only show dull colors like grey. Many people would hate this because then they couldn’t look at pictures and see how they actually look. This can easily be fixed by letting the phone show colors on certain apps like on the camera and social media apps. It’s not that to fix this problem but for some reason not that many people are doing anything.

Phones are used for almost everything and therefore people think they’re fantastic. With a phone you can talk to friends, family and loved ones you could find out how to get to the nearest Starbucks with just a few taps on the screen. As you can tell phones are essential in our world these days, one of the few great things we have but alas great. Even though phones are very useful things they still cause many problems in our life. “Five billion people globally — or two-thirds of the world’s population — now laying claim to a mobile phone connection” (Sawers), this is one estimate taken in 2017. With this many people that own a phone or have access to one people might be able to tell that there are many problems. With all of these people on their phones they will most likely be constantly be checking them. If people are constantly checking their phones then this will no doubt lead to many accidents and problems and it does.

So many people think phones are great and are essential in our everyday lives. They think that phones are needed for everyday tasks, in some cases they are. Cell phones are very addicting and some people don’t think that it’s a problem, they think that phones are an essential object to our everyday lives. These are the people who think that they can quickly respond to a text message while driving by glancing at their screen for a few seconds at a time and typing until they can sent their message. But these are also the same people who get into accidents and harm them self and others.

To sum it all up there are studies that show that people spend way too much time on their phones. Phone companies should make new phones that are less addicting. These phones that the company should make should have less colorful screens, doing so will lower the time that people spend on their phones drastically. Way too many people get into accidents because of distracted drivers, people get distracted way too easily because of their phones. People may find phones essential to everyday lives but in reality they are not that important. People lived perfectly fine before phones were introduced into our world, it made life so much easier with phones but we can still survive without them. 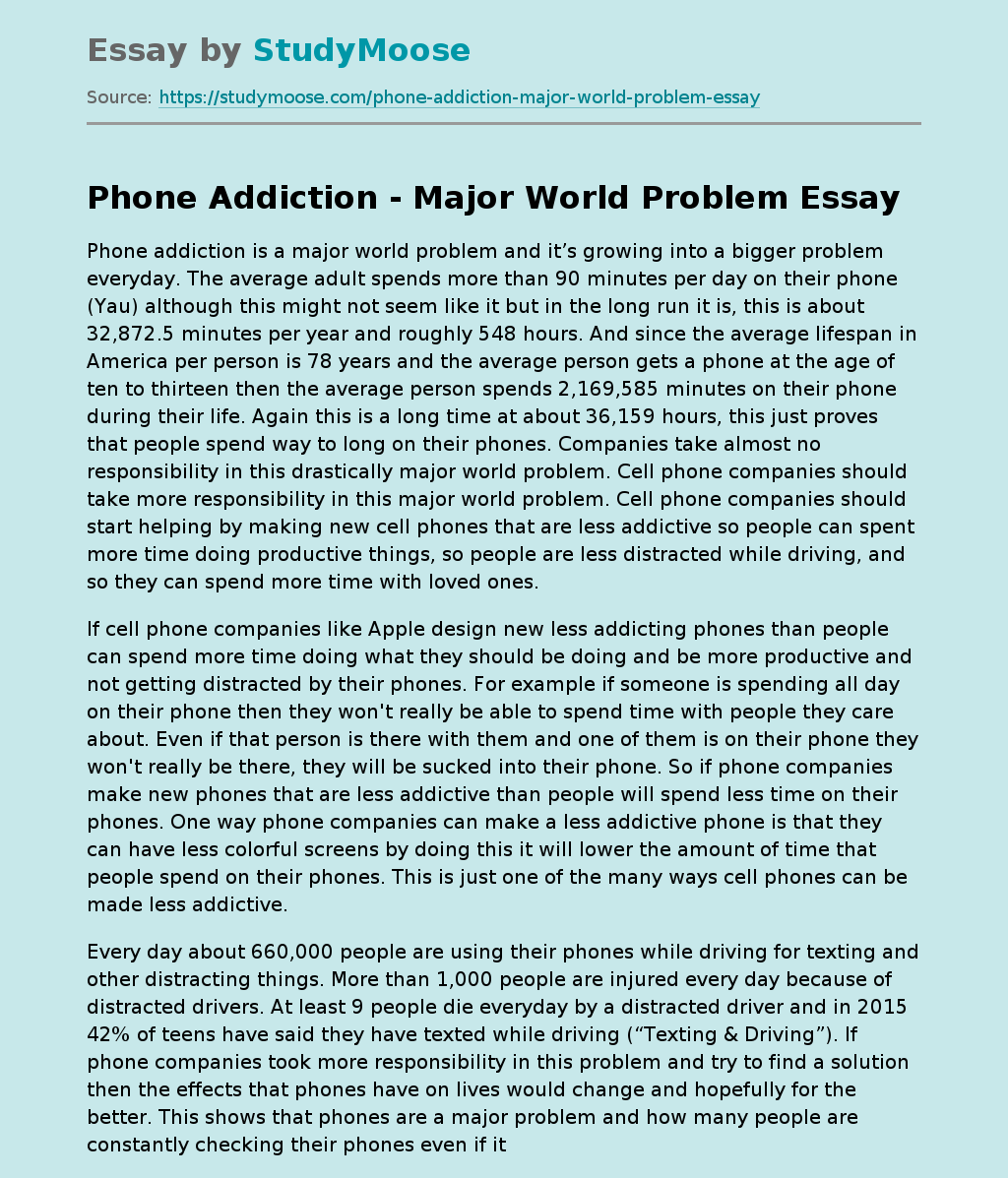