Cell Phone and Addiction to Technology

Addiction to Technology has increased very fast over the years, even though the use of tech-gadgets has many positive impacts, on our lives but it also has negative impacts on the individuals. A tech-gadgets will make an individual strong in technical skills but make them weak in real-life practical skills. Due to the time spent on the devices the person will abstain from some outdoor activities with friends and family.

When someone says they have an addiction, most people might think that an addiction is just alcohol, drugs, or cigarettes but for modern-day society, tech-devices are their addiction.

Don't use plagiarized sources. Get your custom essay on
“ Cell Phone and Addiction to Technology ”
Get custom paper
NEW! smart matching with writer

Technology has had changed the way of our life, one of the technologies that can be an addiction to our society are the cell phones since we use a cell phone every day in our lives, therefore “abstinence isn’t an option “(Alter,2017, p.9) Now having a smartphone we can do practically everything through it; make a call, send a text, surf the Internet, and go to social media platforms.

Many people may have become so addicted to their tech-devices that they not able to make it through a day without their devices but it’s not like people don’t have the power to overcome such obstacle it’s that “there are a thousand people on the other side of the screen whose job it is to break the self-regulation” (Alter,2017, p.

3). for example, “Facebook and Instagram can strikes one of those notes, as does the reward of completing a world of warcraft mission or seeing one of your tweets shared by hundreds of Twitter users” (Alter,2017, p.5). the absence of stopping represented the major reason why most of the people become addicted to technology. On top of that “tech offers convenience, speed, and automation.” (Alter,2017, p.5). Theses device allows easy access to the content as it is both portable and able to access the content which would make someone addicted.

The advancement of technology has helped individuals to elevate to new heights. technology addiction is far more addictive then gambling or drug addiction and even have phycological effects. Technologies “activate the brain regions…and they’re fueled by some of the basic human needs: social engagement and social support and mental stimulation and a sense of effectiveness” (Alter,2017, p.9). These features of the devices and the content designation is, therefore, the reason why one become addicts to the internet. Some people use their phones to the extreme, that they become addicted and “when the source of euphoria vanishes it struggle to cope with the fact it’s now producing far less dopamine than it used to…so the cycle continues as the addict seeks out the source addiction.” (Alter,2017, p.72). Some children and young people are so addicted to video games, social media platform and cell phone not knowing that it is affecting them biologically.

Technology is affecting all aspects of our life. Our education and work but some of us are becoming addicted in a negative way, even positive activity such as exercise. It is common belief today that a healthy diet and a regular exercise routine will lead to a long, healthy life. In society, there are increasingly athletes that are pushing themselves so hard to the point of being addicted and has “become a psychiatric specialty because athletes were constantly reminded of their activity…and inactivity” (Alter,2017, p.18). Whatever happened to exercising for simple joy, or competing because of the love for sport? But because of technology exercise has become an addiction, we now have wearable devices for exercise that “are cheaper, smaller and capture every step…but also a recipe for obsession…” (Alter,2017, p.18).

On the attempt to keep up with society’s values, which emphasizes thinness and perfectionist fitness. Since the body changes as a result of exercise, whether it’s thinner thighs or bigger biceps. People who are exercise get hooked on changes they see in the mirror and want more. which make these individuals to “push through stress fractures and other major injuries to seek the same endorphin high” (Alter,2017, p.18). because of technology even good activity with good intentions can become an addiction.

In conclusion, there are a lot of elements that keep us hooked to technology. Such as convenience, social interaction. The use of technology is associated with a wide spectrum of potential problems and therefore the probability at which one becomes addictive is high. The wellbeing of the technology users, however, would be affected in the long-term use of technology.

Cell Phone and Addiction to Technology. (2020, Sep 09). Retrieved from https://studymoose.com/cell-phone-and-addiction-to-technology-essay 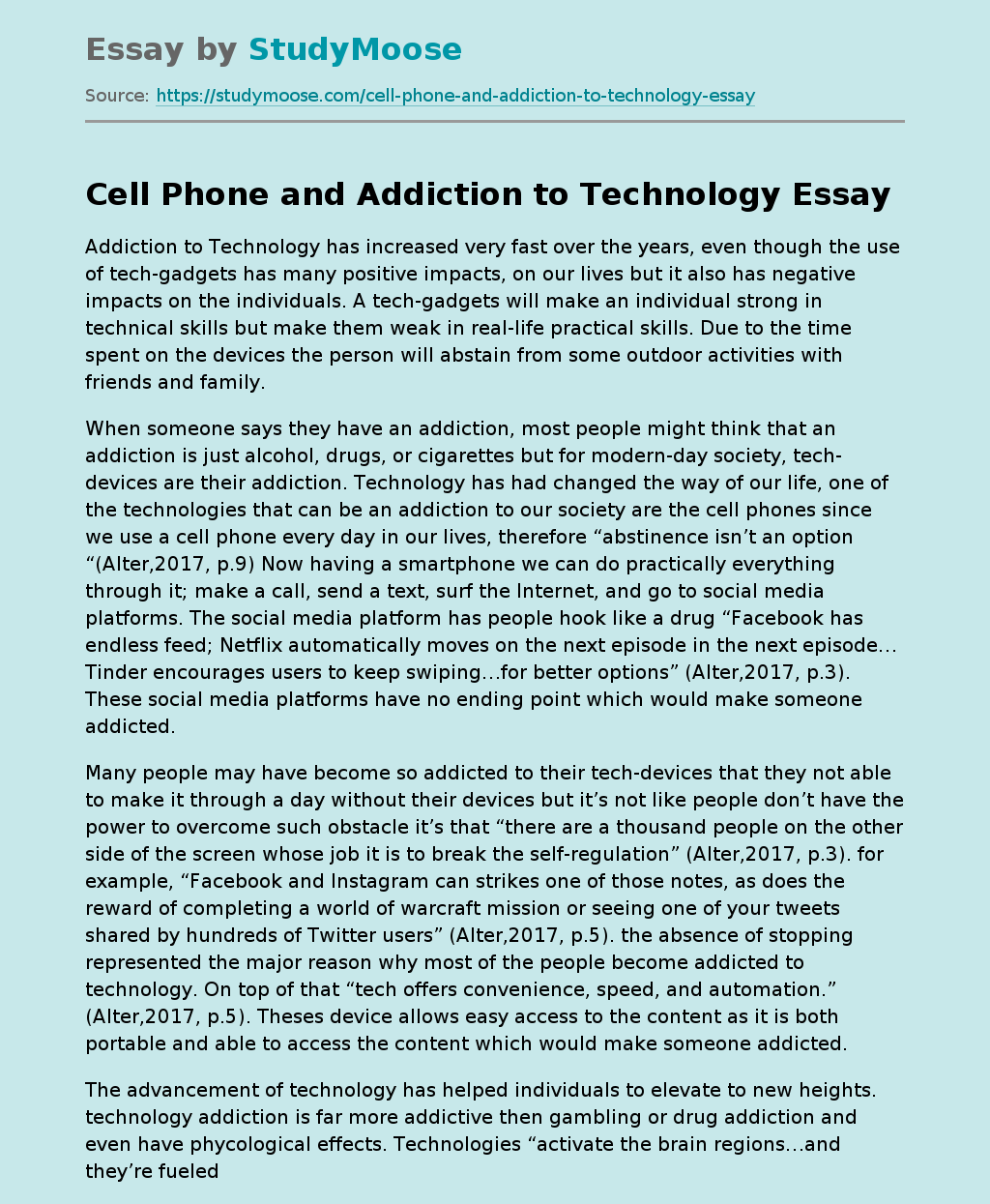