‘Phlebotomy’ comes from the Greek word phlebos, meaning veins, and tome, meaning incision. Bloodletting is one of the humanity’s oldest medical practices, dating back thousands of years and is linked to many ancient cultures, including the Mayans, Aztecs, Egyptians and Mesopotamians. Evidence suggests bloodletting for therapeutic reasons may have begun in Egypt around 1400B.C. Tomb paintings from this time show the application of a leech to a patient. The purpose was to cure a person suffering from some kind of infirmity (leprosy, plague, pneumonia, stroke, and inflammation, pretty much anything).

Turn in your highest-quality paper
Get a qualified writer to help you with
“ Phlebotomy in Preventive Health Care ”
Get high-quality paper
NEW! AI matching with writers

The patient was pierced or cut and then drained of several ounces of blood until they fainted.

In ancient Greek culture, a physician named Galen of Pergamon took the practice in a more scientific direction when he discovered that arteries were filled with blood, not air. Galen’s approach to bloodletting was based on two key concepts. First, Galen believed that blood didn’t circulate, but stayed motionless in the body until it either went stagnant or was let out.

Secondly, he thought the balance of the four humors (blood, phlegm, black bile and yellow bile) was the source of health or illness. Mapping out the blood vessels of the body, Galen would cut his patients in different areas, depending on what area he wanted to treat. For example, the right hand would be cut and drained in order to treat liver problems. He was also known to give his patients drugs in order to induce vomiting or urination.

Bloodletting was also prominent in the early days of some of the world’s most practiced religions.

The Talmud (a central text of Judaism) included rules for days where bloodletting could be practiced. Early Christian writings outlined which saint’s days were the best for the ritual. Bloodletting is also referenced as a treatment for fevers in some early Islamic texts. Continuing into the middle ages both surgeons and barbers were specializing in this bloody practice. Barber poles which still decorate the outsides of barber shops are a leftover tradition dating back to the days of barber bloodletting. The swirling red line on the pole represents the blood itself, the white represents the tourniquet, and the pole itself represents the stick the patient would squeeze in his/her hand in order to dilate the veins.

Bloodletting as a medical procedure migrated to the Americas along with the European colonists, stretching in time from the residents of Plymouth to the Founding Fathers. Physician Benjamin Rush (one of the signers of the Declaration of Independence) recommended bloodletting to his patients on a consistent basis. As a matter of fact, George Washington, the first U.S. president, died in 1799 from a throat infection after having 3.75 liters (9 pints) of blood removed from his body within a 10 hour period as treatment for a throat infection. The draining of 16-30 ounces (1-4 pints) of blood was typical. Blood was often caught in a shallow bowl. When the patient became faint, the “treatment” was stopped. Bleeding was often encouraged over large areas of the body by multiple incisions. By the end of the 19th century (1875-1900), Phlebotomy was declared quackery.

The main process of bloodletting in 19th century medicine included the use of leeches to drain blood from a patient. During the 1830s, France imported approximately 40 million leeches for the purpose of bloodletting. Francois-Joseph-Victor Broussais, a French physician, would reportedly recommend his patients be treated with as many as 50 leeches at a time. Bloodletting, also known as venesection, managed to survive into the first part of the 20th century; it was even recommended in a 1923 edition of a textbook called The Principles and Practice of Medicine. During those days, there were four main bloodletting methods practiced by physicians. The first was the continued use of leeches as a bloodletting source.

The second was called arteriotomy, a process in which the arteries in the temples would be punctured and bled. The third was phlebotomy (also known as “breathing a vein”) where a large external vein would be cut in order to draw blood. The last was scarification – a particularly stomach-turning method which involved one of a varied set of tools made for the purpose of attacking “superficial” blood vessels. Such devices included spring-loaded lancets and a circular, mutli-bladed, device known as a scarificator. The scarificator had a series of twelve blades. The device was cocked and the trigger released spring-driven rotary blades that caused many shallow cuts. The scarificator seemed more merciful than other bloodletting instruments.

The reason bloodletting died comes as no surprise to modern readers that bloodletting killed far more people than it cured. Still, it wasn’t until the 19th century that members of the medical community seriously questioned the merits of this practice. In the 1830s, Pierre Charles Alexandre Louis convincingly argued against the perceived effectiveness of phlebotomy for the treatment of pneumonia and fever. Ironically, with the gradual decline of bloodletting there was an increase of other dangerous and ineffective treatments, such as the use of electricity, elixirs and potions.

These medications gained popularity for the same reason that bloodletting had in earlier times: it sometimes worked as a placebo. Because the patients believed that receiving electric shock therapy would heal their illness, the psychological factor may have been enough to actually make them feel better. As the 20th century brought a myriad of new medical knowledge, technology and medicine, however, these archaic practices (including bloodletting) died out almost entirely within a few decades. With the advent of modern medicine, bloodletting was remembered as a historical fad, similar to the guillotine as a form of death penalty.

After nearly a century of new medical knowledge and leaps of progress that include the development of electron microscopes, mapping the human genome and cloning living tissue, how is it possible that the medical field is reconsidering the use of this ancient practice? The answer is fairly straightforward: Where ancient bloodletting was used to treat and prevent almost every infirmity imaginable, modern bloodletting (or phlebotomy) is used only to treat specific medical conditions of which medical research has proven the benefits. Research has shown that bloodletting could improve cholesterol, blood pressure and blood glucose levels for people suffering from metabolic syndrome. Metabolic syndrome is a term used to describe the list of medical problems facing people who are obese, such as hypertension, insulin resistance and glucose intolerance.

People with this condition are at risk for clots and strokes. Bloodletting thins down the patient’s blood, helping to prevent these problems. Perhaps the most common use for modern bloodletting is a hereditary iron-overload condition known as hemochromatosis. As iron builds in the patient’s blood, it can have a negative impact on various areas of the body, including the heart and the joints. This can eventually lead to disease and organ failure. Bloodletting, now commonly referred to as a “blood donation”, is applied as the main treatment for hemochromatosis, with patients having their blood taken on at least an annual basis for life.

There is another modern form of bloodletting worth noting, if nothing else, because it never actually went away in the first place. Leeches have continued to be used for certain medical treatments throughout the 20th century right up to the present day. Whereas leeches were formerly used to treat all sorts of injuries and sicknesses, today they are mostly used by doctors in the reattaching of severed body parts such as fingers and toes. Attaching leeches is effective because they can help to get rid of any extra blood that might start problematically flooding in the tissue.

Phlebotomy plays a major role in preventive healthcare, diagnosis and treatment of diseases. Although the instruments and methods used for obtaining blood in the beginning may appear crude in comparison to the instruments and methods we use today, the concept remains the same. The exception being, instead of using bloodletting as a “cure” to remove the illness we use it as a way to analyze, diagnose and treat the illness. Without phlebotomy the process of accurately diagnosing diseases and infections would be impossible. 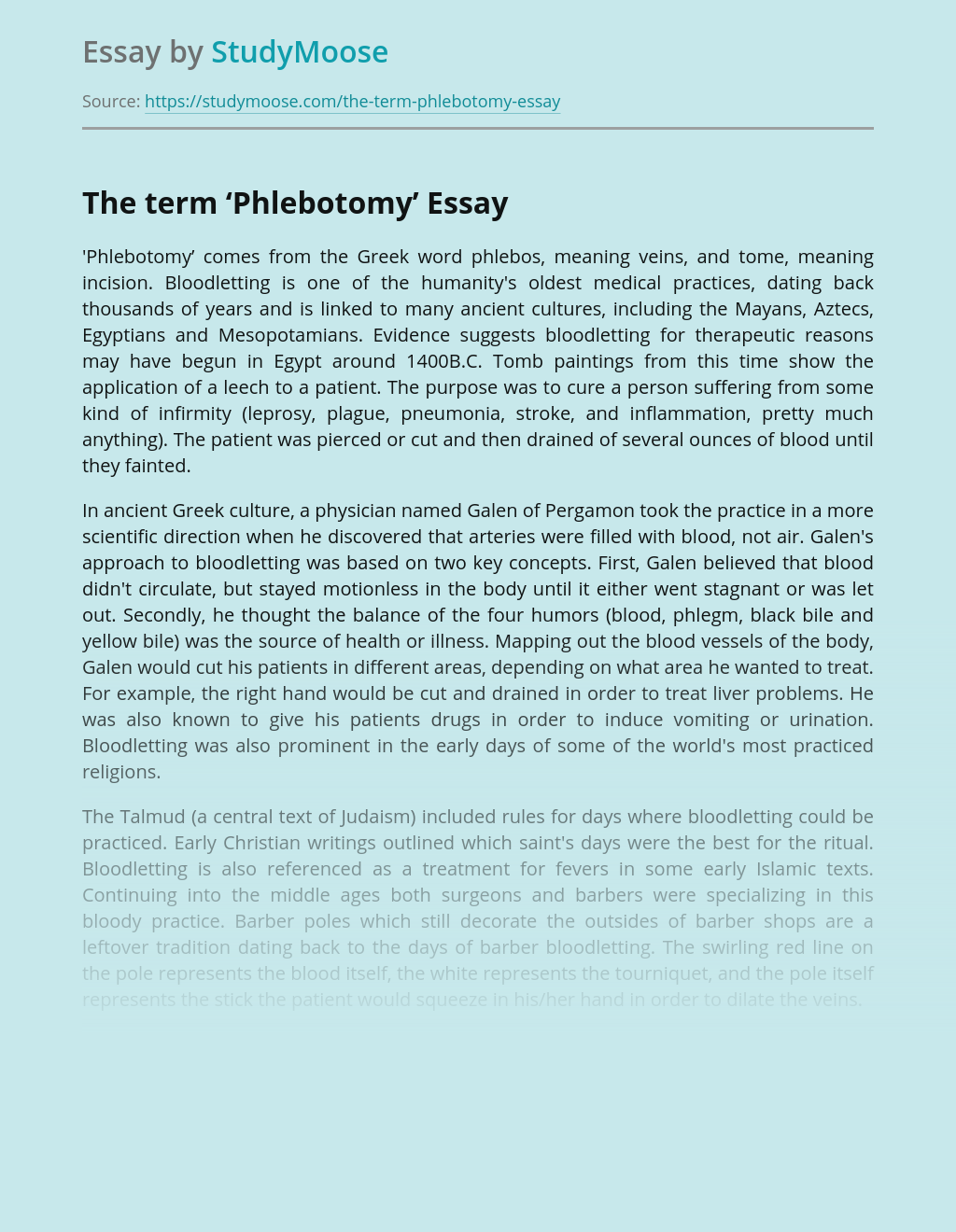 Turn in your highest-quality paper
Get a qualified writer to help you with
“ Phlebotomy in Preventive Health Care ”
Get high-quality paper
Helping students since 2015
Stay Safe, Stay Original