Philosophy of Ernest Nagel from a First Person

One burning and enduring problem in philosophy to which we have given considerable examination is the question of the existence of God–the superlative being that philosophers have defined and dealt with for centuries. After reading the classic arguments of St. Anselm and St. Thomas Aquinas, the contentious assertions of Ernest Nagel, and the compelling eyewitness accounts of Julian of Norwich, I have been introduced to some of the most revered and referenced arguments for and against God’s existence that have been put into text.

Don't use plagiarized sources. Get your custom essay on
“ Philosophy of Ernest Nagel from a First Person ”
Get custom paper
NEW! smart matching with writer

All of them are well-thought and well-articulated arguments, but they have their holes. The question of God’s true existence, therefore, is still not definitively answered and put to rest; the intensity of this debate probably never will mitigate. Many theologians and academics honestly admit that no matter what any philosopher may assert regarding this topic, whether or not a certain person believes in God’s existence is a question of faith and nothing more.

I am naturally inclined, then, even after reading the heavyweight philosophers of religion, to ponder this pressing issue. After all, what one person may gather out of serious consideration of this problem could totally alter his or her life. Even though I have been raised in the Episcopal Christian faith and have attended church regularly, I have never really taken the time to scrutinize the very existence of a being I have been worshipping for my whole childhood. Reading the famed selections in this course has alerted my attention to the topic, and this major philosophical problem continues to eschew my understanding.

One would think that, because I have been raised a Christian and have been exposed to the doctrine and theory of Christianity, I would quickly lean toward the arguments for God and be more easily persuaded by them, hoping to find a defense for spending nearly every Sunday morning in the chancel at church. Actually, I am not automatically persuaded toward the theist position thanks to an atheist argument; the philosopher whom we have examined this semester who complicates this issue for me is Ernest Nagel, an atheist professor who wrote an outstanding defense of atheism. I found that his defense made atheism appear a much more attractive way to think than any theistic religion. I was not impressed, though, with his contentions against the Ontological Argument of St. Anselm, and thus I refrain for now from venturing to the atheist way. Because of Nagel, I now have ambivalence towards believing in God, even though reading his work did not change my broader belief.

One object of heated debate between convinced believers in God and convinced atheists is the Problem of Pain or Theodicy Problem, which asks how evil and suffering can exist in the world if an all-powerful and all-good God is overseeing what happens in his world. There are a few arguments that theists have constructed defending God’s existence in spite of this obvious conflict between doctrine and reality. Some of them, even though they have become classic arguments, are ridiculous; for example, Nagel confronts the argument stating that “the things called evil are evil only because they are viewed in isolation; they are not evil when viewed in proper perspective and in relation to the rest of creation” (605). This argument can be easily destroyed by a man of reason, and Nagel does so mainly by holding that “it is irrelevant to argue that were we something other than what we are, our evaluations of what is good and bad would be different” (606).

Calling the argument “unsupported speculation,” (606) Nagel easily downturns this faulty response to the Theodicy Problem. What I found most admirable about this section of Nagel’s “Philosophical Concepts of Atheism” was his own solution to the problem–simply that it cannot be resolved: “I do not believe it is possible to reconcile the alleged omnipotence and omnibenevolence of God with the unvarnished facts of human existence” (606). Since Nagel has demonstrated that the Theodicy Problem cannot be taken down, it remains a solid argument for atheists and a very good disproof of the existence of an all-good, all-powerful God. I have not seen a response to this problem so effectively stated, honest, and convincing. Nagel’s arguments concerning the Theodicy Problem show that atheists think in a much more straightforward and practical fashion than do theists.

The way Nagel uses the words “unvarnished facts of human existence” (606) leads to another attractive element to atheism and to his work–Nagel appeals to the earthly life, and only the earthly life, in describing how atheists think. Instead of reaching out to another world or deity that does not even certainly exist, atheists “often take as their ideal the intellectual methods employed in the contemporaneous empirical sciences” (607). Because atheists use empirical evidence obtained through science, i.e. use evidence that certainly exists and can be sensed, all of the thinking they do is based solely on what clearly and distinctly exists in reality. To atheists, says Nagel, “controlled sensory observation is the court of final appeal in issues concerning matters of fact” (608). Not all of theist thinking is based on something that is proved to exist, since God has not been absolutely proved to be, so the essential base of the theist thought is composed of supposition and theory.

Atheists simply ground their logic in what is certainly known, and no assumptions found their reasoning. Even in matters of human morals, atheists think practically: “The conceptions of the human good [atheists] have advocated are conceptions which are commensurate with the actual capacities of mortal men, so that it is the satisfaction of the complex needs of the human creature which is the final standard for evaluating the validity of a moral ideal or moral prescription” (608). Nagel also excellently applies practicality to atheism in the way he describes “the stress upon a good life that must be consummated in this world” (608). Nagel dismisses the need of “some unrealizable other-worldly ideal” (608) so well that atheism appears supremely attractive among all the other religious modes of thought. Since Nagel implements practicality so well and perpetuates the question of the Theodicy Problem in “Philosophical Concepts of Atheism,” I found not only Nagel’s text, but also the atheist way very reasonable (literally) and intellectually striking.

While Nagel superbly makes atheism appear much more attractive as a way of thinking than a theist religion because of its practicality and direct method of reason, I do not think he deals with St. Anselm’s argument for God’s existence well enough. Nagel refutes Anselm’s Ontological Argument by saying, “the word ‘existence’ does not signify any attribute” (601). I starkly disagree with this position. I think, as does René Descartes, that existence in reality is a descriptor. When we, for example, reflect upon the life of one who has died, we experience that person as he or she exists in our understanding and in our imagination by remembering him or her; although this individual is no longer existing in reality, he or she still exists, but on another plane of being. I am aware that this is, indeed, a highly debatable topic, but I am quite convinced that existence is an attribute, and thus I find that Anselm’s assertions withstand Nagel’s assaults. Even though the fact that atheists are practical, down-to-earth thinkers attracts me, I am still not convinced that God does not exist. For the time being, then, I will retain my theistic beliefs and remain a churchgoer, even though I now have ambivalence toward theism.

I am not convinced that God does not exist because of some other reflections, shared especially by many within the scientific community. My current beliefs regarding God’s existence, those that I find more convincing than even the Ontological Argument, follow an deductive chain of reasoning; the argument I support most is the near impossibility that everything in creation came about by accident. The chances for molecules and cells, the very building blocks of the incredibly intricate natural creation, to come together entirely by themselves are so extremely slim that it is hard to believe that the world and all that lives in it are products of chance.

The fact that the planet Earth is in exactly the right spot in space to support life, the fact that there are just the right amounts of chemicals and substances to sustain biological life on Earth, and the fact that there is only one species with the intellectual firepower to overcome physical inferiorities and become the ruling class of organisms on the planet all contribute to the suspicion that there may be a certain genius that planned out this harmonious structure of life. This is a tough argument for atheists to refute, but then again, it still could have been chance–it still could have been that one in a billion trillion times that happened. With that in mind, a great secondary argument is Anselm’s Ontological Argument, a piece of reasoning I think both Nagel and Gaunilo fail to overcome. If it ever is overcome, I may begin to take steps across the bridge to the atheist way.

Philosophy of Ernest Nagel from a First Person. (2016, Jul 22). Retrieved from https://studymoose.com/philosophy-of-ernest-nagel-from-a-first-person-essay 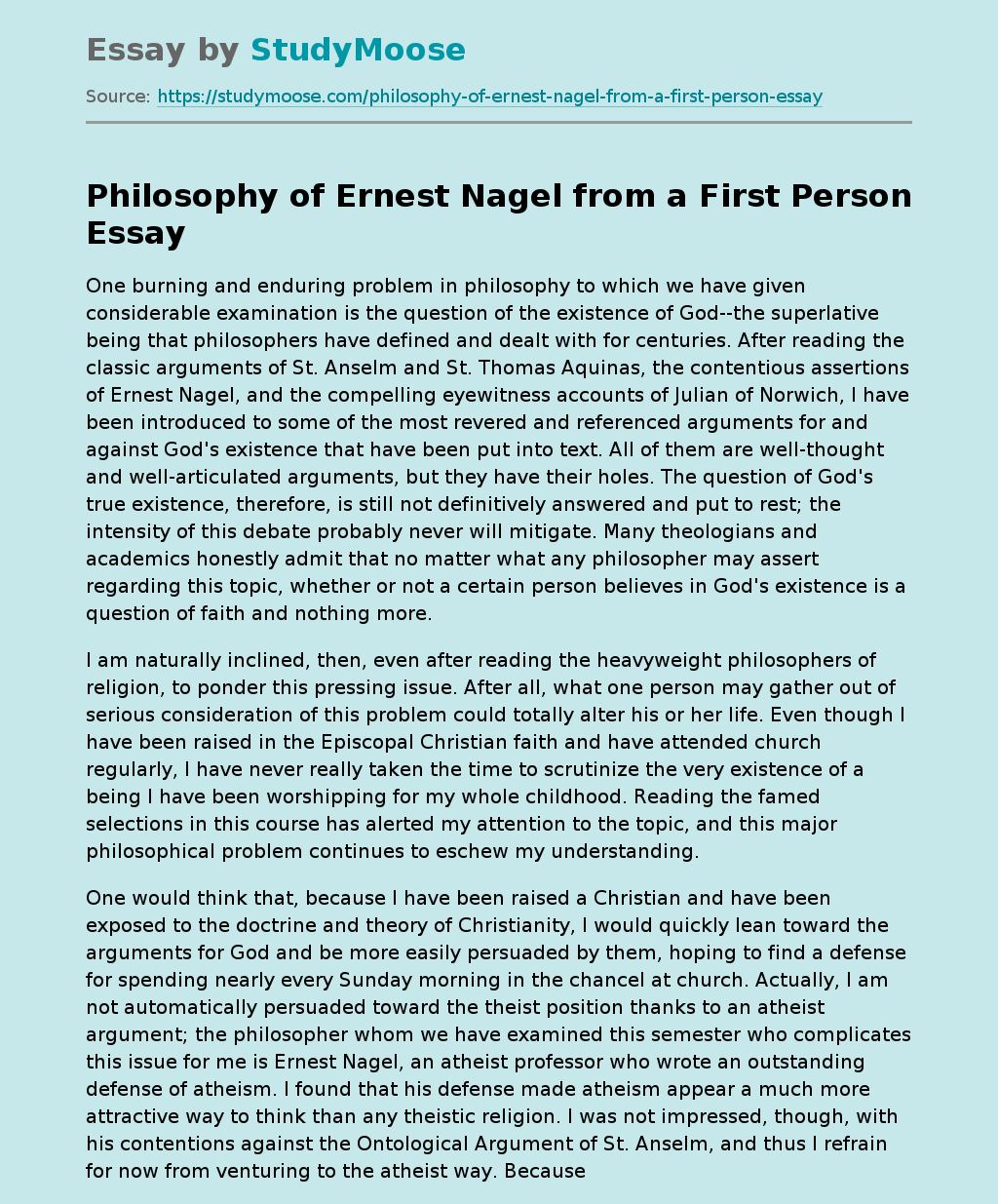