Should school uniforms be required in public schools? It will increase education, and decrease on violence and the cost will be lowered. This is a question that has created debates in several different schools. Some say that school uniforms represent discipline and obedience while others say not wearing uniforms takes away from the children’s creativity and individuality. Not only does wearing uniforms teach obedience and discipline it also helps students to focus and have better grades and it cuts cost on parents.

Don't use plagiarized sources.
Get Your Custom Essay on Persuassive speech School Uniforms Just from $13,9/Page

Will wearing uniforms improve education in schools? Yes wearing uniforms does improve on education. By having students wear uniforms they are more focused on their studies than what someone else has on. It has caused a less distraction because when you have students that are wearing all the new name brand clothing students are found in the classroom admiring the other peers clothes and shoes instead of focusing in the class room. So by wearing the uniforms they all have on the same thing and allow the students to focus and pay more attention in class which helps these students get better grades.

When it comes to education, clothes are not quite important. According to (Thomas, S) “studies show wearing uniforms help the educational environment. It only shows unity within the student-body but as well helps students concentrate in class.” Do uniforms cut down on conflict in schools? I believe uniforms do cut down on conflict in schools. It cuts down on the competition with others in schools. Less fighting and more discipline. For instance High school and middle school students have it the worse it could be stressful trying to get all the credits you need to graduate. This is the age were they experience name brand clothing, shoes, also were the most bulling and violence comes in from gang’s and other different things. Being bullied by your appearance can be a bit overbearing. During my research I found that in the late 90’s(Pickles, L, P.) the focus of uniforms was called to action for intercity schools were violence was happing in for several different reasons from theft to gangs and cliques.

I remember when I was in middle school and high school before uniforms were implemented there was a big issue with gangs if you wore the wrong color (red or Blue) you were approached by these members. So going to uniforms were they all having the same color top and bottoms solved a lot of that violence. Then there comes the bulling and teasing of other students who are less fortunate than others. Students can be mean and messes with another student’s self-confidence because they are in a household were they have to wear hand me downs or parents can’t afford the latest brands of clothing. So by wearing uniform everyone looks alike and there is no reason for the bullying. Do uniforms cut down cost? Uniforms indeed cut down cost for families. Instead of parents having to go out and buy $50.00 pair of jeans and yes that is for one pair. Most stores have bundle sales on school uniforms. What you paid for one pair of jeans can buy you 2 uniform bottoms and 2 uniform tops and some places 3 or 4. Only expensive thing you worry about is shoes.

Uniforms are much less expensive than traditional clothing worn by teens. Some schools provide programs where kids can receive the uniforms at little or no cost. I remember my daughter went on a filed a trip when she got home from the field trip she had a be brown paper bag in the bag was 2 uniform pants 2 shirts, a sweater, socks, a pack of underwear and many more things that were given to her in this program that was offered in her school. So there is help to get uniforms at little to no cost were you can’t get that help with regular clothing for school. By allowing school uniforms in the school, education will improve student’s success. It will enforce discipline towards learning. There will be less violence, Peer Pressure will reduce because there will be less distraction on what everyone else has on.

However some people feel that wearing the uniforms takes away from a student’s individuality students are still encouraged to be creative. Students tend to alter their uniform with jewelry. But we have to remember the most important thing school is a place for our children to learn not to flaunt wealth and fashion. We have to decide as a society if individual expression is more important than an improved violent free educational performance. I’m like most parents uniforms can be worn during school and they can express there individuality outside the class room when it comes to dressing.

References
1. Uniforms in the Schools: Proponents Say It Cuts Competition; Others

2. Mandating school uniforms at all grades 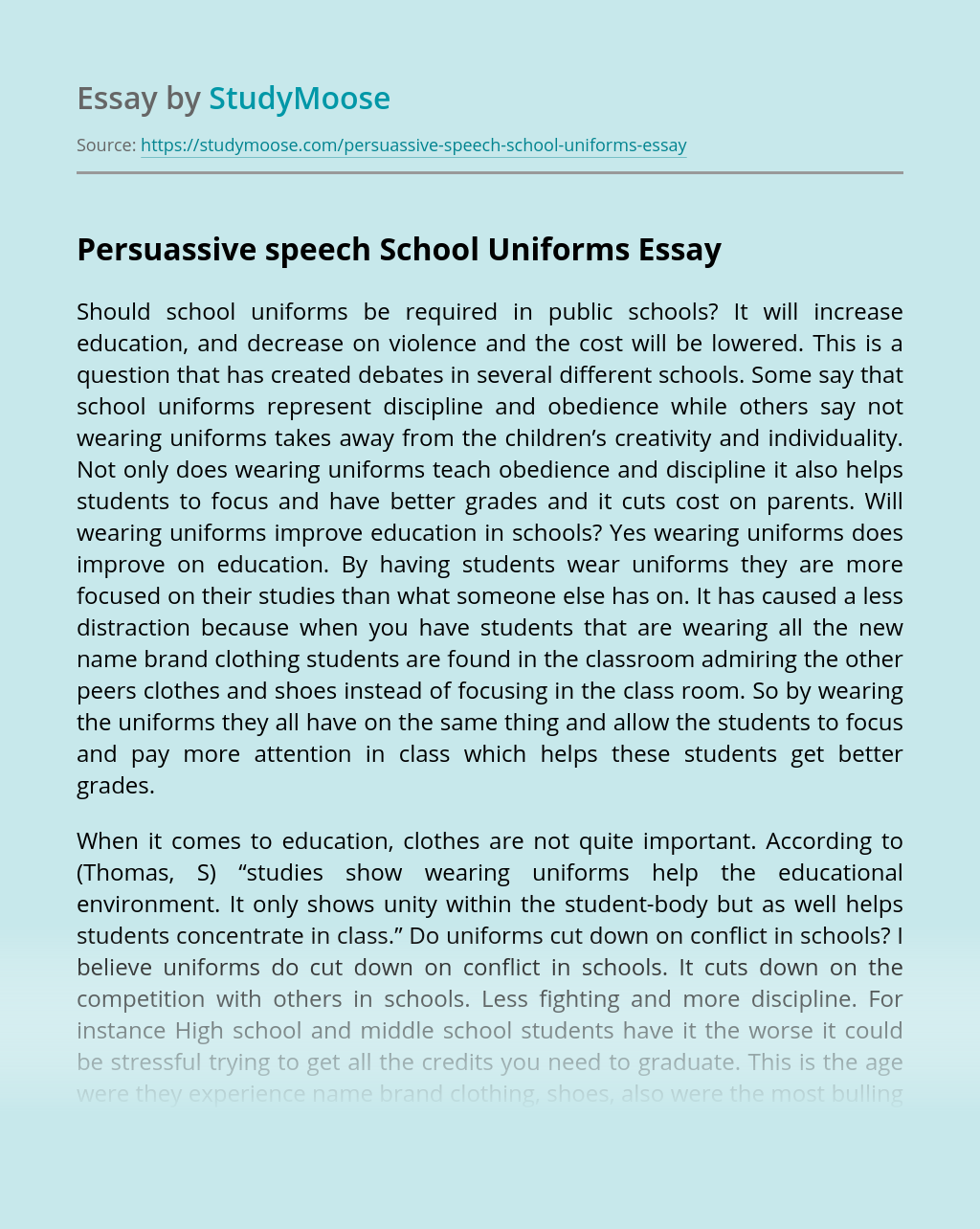 Proclamation of Neutrality (1793) – issued by Washington that America too weak to join war, Jefferson disagreed and resigned from cabinet. Jay Treaty- John Jay tried to talk Britain out of searching American Merchant ships, agreed to leave U. S. Western frontier but not to stop taking ships, this angered Americans but kept their neutrality.... VIEW ESSAY

3. Center for Policy modeling is a Manchester Metropolitan university-based academic website that operates under the slogan we model anythingeventually! It is a research-only unit of MMU business school that has focused on complexity science and social simulation. It has strictly stuck to its core agendum since 1992. Scott Moss is the founder of CFPM,... VIEW ESSAY

Cannibalism has gone through stages of acceptance to morally corrupt and unspeakable. When faced in a dire situation, such as isolation and deterioration of the mind and body, cannibalism becomes an option of survival. When people confess of their actions, is it fair for us to judge? What would a person do in that situation,... VIEW ESSAY

As the largest domestic products manufacturer in the world, Electrolux has about 70000 employees all around the world in about 150 countries, making 14 billion euros in sales in 2005. However, an acquisition case from its main competitor, Whirlpool, is challenging the ? rst place of Electrolux, at the time Electrolux has just decided to... VIEW ESSAY