Find out more: OJT Experience Essay
Coca-Cola FEMSA, a subsidiary of FEMSA, is the biggest public bottler of Coca-Cola items on the planet in regards to sales volume, accounting for one out of every 10 Coca- Soda pop items offered globally.

Established in Mexico in 1890, FEMSA has actually grown from a local brewery that began operations with just 72 staff members to among the leading companies in Latin America with presence in 9 countries and in the Philippines.

In the face of a complex, competitive, and changing world, FEMSA beneficially handles its service to meet the needs of an ever-growing, ever-evolving pool of consumers and consumers.

The objective statement of the Coca-Cola FEMSA is “To satisfy and please beverage consumers with excellence.”

The vision statement of the Coca-Cola FEMSA is “To be the best bottler on the planet, acknowledged for its outstanding operations and the quality of its individuals.

Roles and Responsibilities
Names and titles/positions of the employees in my department (include their functions in the organization).

Dennis Bunoan– Operations Executive.
He is the head of our department. His general job is to supervise the other workers and collaborate all the work done inside the workplace. Since he is the head, he is the one who approves demands and other matters.

Richard Guamos – Warehouse Supervisor
He leads a team of workers who receive and record new stock as it comes in, and move stock onto trucks or store shelves as needed. He is the one in charge to supervise, evaluate and train new employees assigned to warehouse.

Victor Carreon – Warehouse Supervisor
He is in charge to supervise receipt of all shipments. He also evaluates complaints received on shipments of equipment and supplies and take appropriate actions.

Rogelio Pamintuan – Warehouse Supervisor
He directs and maintains a safety program for all employees assigned to warehouse. He operates tools, equipment, and machinery according to prescribed safety procedures. He also corrects unsafe conditions in work area and report any conditions that are not correctable to higher ups immediately.

Carlo Roel Pacis – Warehouse Coordinator / Operations
He coordinates the movements of goods from the plant warehouse up to the point of sale. He manage and prepares all documents related to shipping. He also monitors and assists the loading and unloading of merchandise inside the plant.

William Nuqui – Settlement Analyst
His main task is to settle every transactions especially those goods coming in and out of the plant. If there were some clarifications and corrections on the transactions (e.g, returned Purchase Order) he is the one who settle such problem. My Duties and Responsibilities (include the summary of the activities done in the office)

One of my duties is encoding information to the computer or database. I was also tasked to file or sort some important documents that are going to be submitted to the higher ups. Furthermore, I was also asked to troubleshoot a certain problem in one of their computer. Lastly, I was asked if I could recommend any hardware upgrade for one of my office mate.

An Evaluation of my Training
Describe your work environment

I was assigned in operations department. Despite being one of the busiest department of the company, the ambiance inside the office is good. Our officemate are very friendly and easy to go with so I never had a hard time working in my new environment. Although lots of paper works are coming inside our office everyday especially those documents related to shipping of goods, the employee manages to maintain the good ambiance inside the room. The office is cooled by two air-condition unit since the office has a lot of computers.

Describe the different office equipment / devices in your department There are a lot of computers in our office. Their brand are mostly dell and their operating system is Windows 7. They use radio communication system in order to communicate with other people since the company is big.

Identify and describe the learning experiences / skills acquired during your practicum I learned a lot of things during my stay in the company. The task that were given to me improved my skills significantly. My communication skills was enhanced because of how I communicate with my fellow office mates. My typing and Microsoft office skills were also enhanced since the task that were given to me is where it is focused.

What were the challenges/problems had you encountered during your practicum and did you solve them? There is one time that I had to rush some paperwork since I was told that they had to pass it as soon as possible. With my typing skills, I was able to finish the work on time. I also had a problem with the usage of the program that they were using since it’s slightly complicated to use.

Do you prefer to work alone or with a team?

I prefer to work with a team. Being an intern in this company made me realize that working in a team will make the work faster and more convenient. For example you are confused with what you are doing, you can always ask for your teammates’ suggestions or assistance on that particular matter. In that way you can surely produce an effective output.

5 Photos taken in the workplace with short description

Inside the Coca-Cola FEMSA plant.

Inside our office. This is where I usually do my work.

My desk after filing and sorting of documents

Interpersonal Relationships / Working relationship with co-workers They respect the hierarchy of authority when it comes to work. They know where and to whom they should report any issues concerning them. When it comes in dealing with officemates, everyone treats each other equally regardless of their position. They respect everyone. Those who belong to the top management don’t use their position to take advantage from those who belong to the lower position.

Coca-Cola FEMSA is a big company, so everyone must contribute to the success of the company. Different workloads are given to different employees. Sometimes it is hard to accomplish the task given, luckily, employees are helpful and kind. They help each other as long as they can even if it is already beyond their job. They practice working as a team inside the office because they believe that two heads are really better than one. By doing so, employees can produce an effective and efficient output.

Coca-Cola FEMSA San Fernando Plant has been in the business for more than 30 years now. For me, they own their success not just to their hardworking employees, but also to the quality of service they delivered to their market. They make sure that every time a customer purchase their products, they will be satisfied. By seeing this, I learned that quality of service is really an important tool in achieving success, especially in a real working environment.

The company is very strict when it comes to attendance and punctuality because employees are being paid based on their working hours. The gate near the guard house where the employees sign in and out is protected by a CCTV camera to make sure that employees’ time in and out is accurate. Coming on office beyond the official time-in is a deduction on their salary. For emergency absences, the company is very considerate as long as the reason for being absent is valid. For us interns, they implemented the same rule to prepare us for future employment.

The company wants to maintain decency anywhere inside the plant. Employees, especially ladies, are not required to wear make up to look presentable unlike other company. As long as they wear the proper uniform and practice good hygiene, they are free to enter the plant. This rule also applies to the interns. The only difference is we can chose whether to wear our school uniform or to wear decent civilian attire. 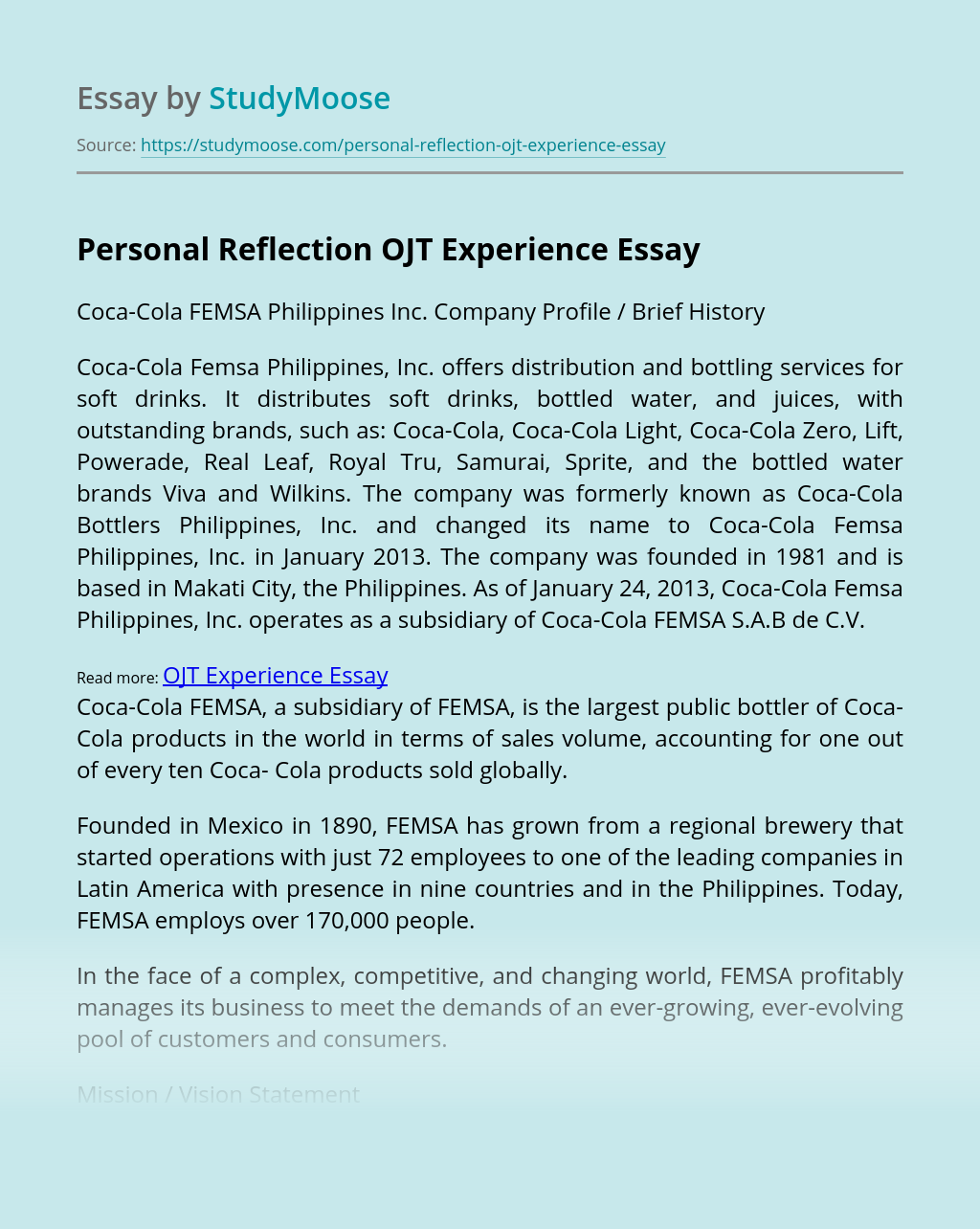