Personal Hygiene in the Army

In the Army, personal hygiene is defined as the measures each individual must employ to keep in good physical condition and the precautions he must take to protect himself from disease. As such, not only cleanliness of the body, but also proper use of insect repellents, avoidance of unauthorized water and food, and any other measure that the soldier is directed to take to preserve his health are included. The basic principle of cleanliness of person and neat appearance of troops is a traditional policy of the Army.

Turn in your highest-quality paper
Get a qualified writer to help you with
“ Personal Hygiene in the Army ”
Get high-quality paper
NEW! AI matching with writer

As more became known about the transmission of disease, stress was placed upon particular phases of personal hygiene, such as washing hands after using the latrine, and proper use by the individual of sanitary measures for disposal of waste and purification of water.

see more:describe how underlying personal issues might be addressed

As with all aspects of military sanitation, commanding officers were responsible for enforcement of the provisions concerning personal hygiene. The Medical Department was to conduct inspections and recommend appropriate action to correct deficiencies.

The paragraph of AR 40-205 devoted specifically to personal cleanliness stated:

Every member of a command will bathe once daily while in garrison, and in the field at least once weekly. The hands will be washed before each meal and immediately after visiting a latrine. Teeth will be cleaned with a brush at least once a day. Fingernails will be cut short and kept clean. The hair will be kept short and the beard neatly trimmed. Clothing and bedding will be kept clean.

Soiled clothing will be kept in barrack bags. At prescribed physical inspections particular attention will be given to personal cleanliness. Unit commanders were instructed to determine that the men of their commands had been properly fitted with socks and shoes and that all foot defects were suitably cared for. An undue amount of foot injury and disability from shoes was to be regarded as evidence of inefficiency on the part of responsible officers.

Precautions for care of feet during marches were specified. Before long or protracted marches, unit commanders were to inspect the bare feet of their men for defects which might require treatment. While on marches, commanders were to have their men wash their feet each day as soon as practicable after reaching camp, cover blisters or excoriations with a light dressing or zinc oxide plaster, dust the feet with foot powder, and put on clean socks. Measures that the individual soldier could take for his own protection, as well as measures the Army would take for him, were included in each of the appropriate sections. Under mosquito control were listed the proper wearing of clothing, use of repellents, and use of bed nets. Frequent and thorough bathing was specified as one of the precautions against body lice.

During the Revolutionary War many generals, such as Tilton, Brocklesby, and Washington invoked the Mosaic Sanitary Code which is a standard of field sanitation established in the King James version of the Old Testament in the Fourth and Fifth books of Moses. Many of these orders came with threats of punishment for officers who did not enforce them amoung the men and penalties (including being sent in front of a firing squad) for those men found not in compliance with said orders. At the end of the horrible winter of 1777-1778 at Valley Forge, Washington made one of his periodic inspections of the camp. According to a note in the Orderly Book of Brig. Gen. George Weedon on 13 March 1778, Washington found the camp filthy, with carcasses of dead horses and much offal in the streets, and “nastiness, is spread amongst ye Hutts, which will soon be reduc’d to a state of putrefaction and cause a Sickly Camp.”

Following this, on 13 March 1778, Washington issued general orders from Headquarters, Valley Forge which have a plaintive tone combined with solicitude and sternness: “The Commander-in-Chief: Out of tender regard for ye lives & health of his brave Soldiery, and with surprise that so little attention is paid to his orders, He again in ye most positive terms, orders & commands “clean up the camp and observe the manifold regulations regarding cleanliness.” Infectious diseases are a major preventive medicine problem for U.S. Army Soldiers living in close quarters. Some of these infections are caused by direct person-to-person contact, but a vast majority of infections are caused by the germs found on surfaces. Improved hygiene can help reduce the spread of infection. An effective hygiene plan must start with accepting that disease-causing bacteria, viruses, fungi, and protozoa are always indoors on people, food, insects, and potentially in the air. Cleaning must be adequate to reduce germs to a level which is not harmful to health. A sterile environment is not expected. To achieve a hygienically clean (as opposed to visibly clean) surface the germs must either be removed or they must be killed by disinfection.

Methods of hygienically cleaning sites and surfaces include detergent-based cleaning followed by rinsing, and the use of disinfecting agents. The hands are probably the most important cause of cross-contamination and cross-infection. The World Health Organization suggests that sanitation-related disease in developing countries could be reduced by up to 60% if people washed their hands after defecating. Acute respiratory infections (colds, sore throats, bronchitis) are most frequently transmitted by droplets from coughing or sneezing. Using tissues or shirt sleeves to interrupt these droplets are effective ways to prevent transmission. However, coughing or sneezing into your hands allows the spread of the germs to other parts of the body (through the eyes or breaks in skin, etc.) or to other individuals through touch.

Toilets, showers, and sinks can become reservoirs of germs. Moisture and residual soil at these sites provide an ideal environment for the growth of germs. Exposure to disease-causing germs from contaminated floors and furnishings is very low. Germs are usually transferred from environmental surfaces to individuals by hand contact with the surface. Household bleach with water is the recommended disinfectant solution. It is effective, economical, convenient, and readily available. The solution of bleach and water is easy to mix, safe if handled properly, and kills most infectious germs.

Standards of personal hygiene varied according both to the facilities available and the type of combat the individual was engaged in. Theater preventive medicine officers at all levels realized the necessity for convincing company officers of the importance of command responsibility for enforcing adequate standards of personal hygiene. The relative role of personal hygiene in control of disease varied considerably according to the degree of unit sanitation and area control achieved and according to the degree of specific protection afforded by measures such as immunization. There are few outbreaks of disease in which only one factor can be implicated; it is therefore difficult in most cases to correlate specifically good or bad personal hygiene with disease incidence. A continuing educational program, combined with frequent inspection by both commanders and medical personnel, was found necessary to keep individual health observance at proper levels.

A problem of the Medical Department was to convince line officers of their responsibility in enforcing health precautions, such as water discipline, eating only authorized foods, care of the feet, and proper wearing of the uniform for protection against arthropod vectors of disease. The soldier, too, had to be convinced of the relationship between his actions and his health and the health of his entire unit. Agencies were set up, within the Office of The Surgeon General and at all major command levels, to insure the dissemination of information necessary for the soldier to safeguard his health. The effectiveness with which personal hygiene measures were applied, both in training situations and in active theaters, varied widely.

Experienced observers agree that there were numerous lapses from established minimum standards and that, in future military operations, thorough training in personal hygiene will be necessary. This training must include not only the principles and methods to be applied, but should also serve to motivate personnel of all ranks. In addition, there must be command and medical inspections coupled with provisions for effective corrective actions.

Personal Hygiene in the Army. (2016, May 24). Retrieved from https://studymoose.com/personal-hygiene-in-the-army-essay 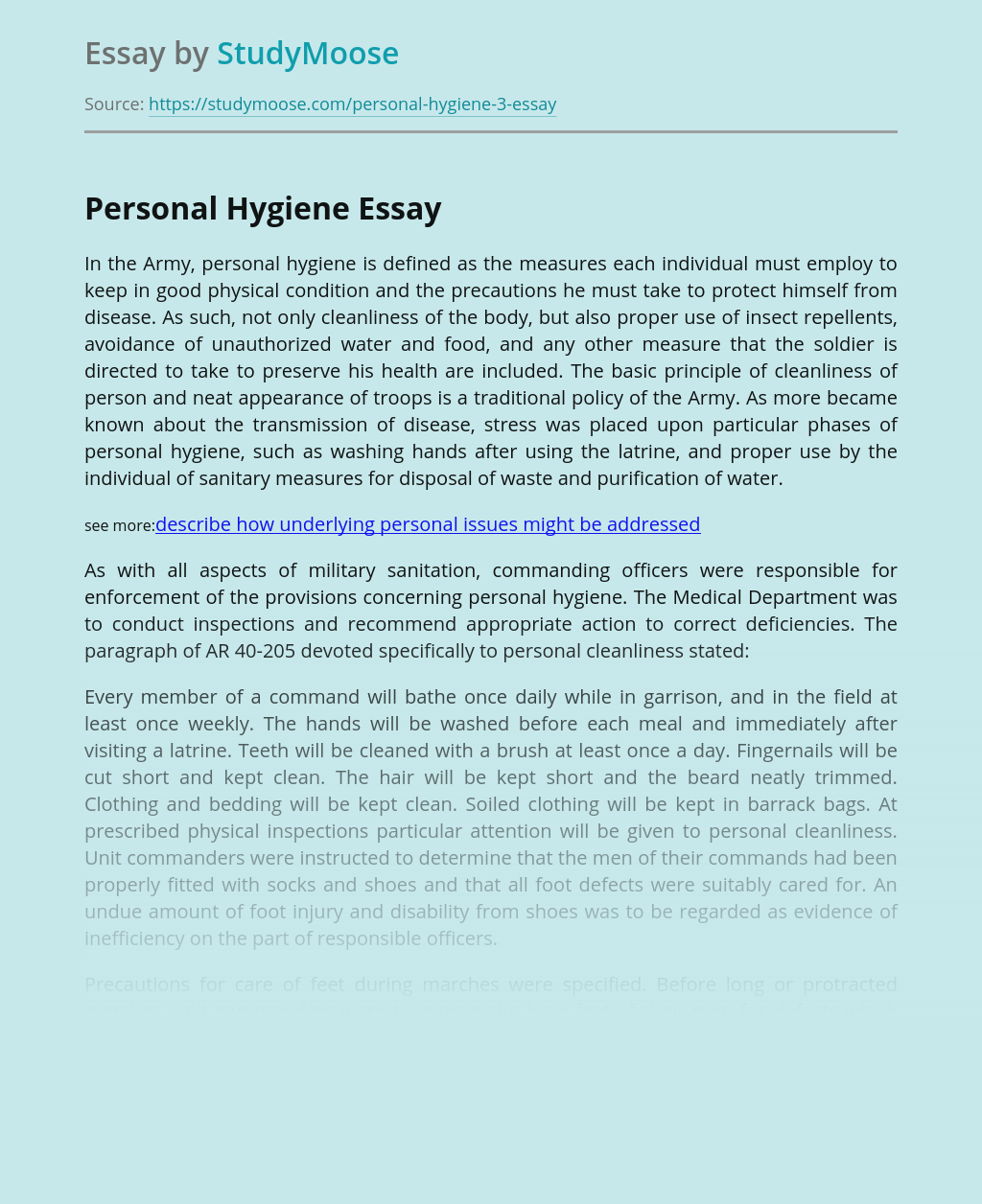 Turn in your highest-quality paper
Get a qualified writer to help you with
“ Personal Hygiene in the Army ”
Get high-quality paper
Helping students since 2015
Stay Safe, Stay Original