The Sanitation and Hygiene of Street Food Vendors

The street food industry plays an important role in developing countries in meeting the food demands of the urban dwellers. It also contributes substantially to household food spending and provides an income to many female-headed households. It is estimated that street foods contribute up to 40% of the daily diet of urban consumers in developing countries (Consumers International, undated). Street foods feed millions of people daily with a wide variety of foods that are relatively cheap and easily accessible. The street food industry offers a significant amount of employment, often to persons with little education and training.

Turn in your highest-quality paper
Get a qualified writer to help you with
“ The Sanitation and Hygiene of Street Food Vendors ”
Get high-quality paper
NEW! AI matching with writer

Poor personal and environmental hygiene contribute significantly to food contamination and resultant food borne diseases. It is assumed that by their nature, street food contamination is inevitable, yet millions of people depend on this source of nutrition and economic livelihood.

Today, local authorities, international organizations and consumer associations are increasingly aware of the socioeconomic importance of street foods but also of their associated risks.

The major concern is related to food safety, but other concerns are also reported, such as sanitation problems (waste accumulation in the streets and the congestion of waste water drains) and also the hygiene practices of the vendors. The heavy dependence on street foods by urbanites requires that good quality raw materials be used and that the foods be prepared handled and sold under hygienic conditions for the assurance of good health. There is a need to properly address the problems associated with street foods, especially food safety concerns.

The term “street food” has been defined as “ready-to-eat” foods and beverages prepared and / or sold by vendors and hawkers, especially in street corners and other similar public places for immediate consumption (UK Department of Health, 1995). Street food may be consumed where it is purchased or can be taken away and eaten elsewhere. Everything, from full course lunch or dinner to snacks, fruit juice is sold by the street food vendors. Street food vendors can be found anywhere in the world, in urban and in rural locations, and can be vendors who sell ‘ready-to-eat’ foods on streets with or without a license to do so.

They are part of almost any distribution chain, often though at the lower end of the spectrum. Street food hawkers link urban and rural economies through movement of traders and of commodities; they serve a highly varied clientele and play an important role in the marketing of consumer goods to poorer customers. These vendors can be found in clusters around places of work, schools, hospitals, bus terminal, industrial sites and market places (Freese et al., 1998). The food vendors may have a stall which is stationary at a point, usually on the roadside or under a shop, where they prepare or cook food on the spot. Everyday these vendors store their bulky goods such as grills, tables, benches in their caravan (Freese at al., 1998).

Hygiene is the science of preserving health. It involves all measures that ensure the safety and quality of food during its handling (Jay Jane, 1992). Street food is a public health concern, since food hygiene can be difficult to practice at street level in settings where resources are scarce and surroundings are of low environmental and sanitary standards (Rheinlander et al., 2008). Food hygiene comprises of two key words which are “food” and “Hygiene”. Food means any solid or liquid component which is for human consumption and Hygiene means cleanliness. Thus food hygiene stands for “all the conditions and measures necessary to ensure the safety and suitability of food at all stages of the food chain” (Codex Alimentarius, 1997).

This study will concentrate about the sanitation and hygiene of the street food vendors in Tarlac City and how consumers will benefit it. Several studies from the Ghanaian capital Accra have already confirmed that the street food sector is facing serious challenges in maintaining hygiene and safety of foods (Mensah 1999, 2001, King 2000, Tomlins 2002). However, in future which to effectively encourage vendors to improve street food safety and thereby minimize the dangers of food borne diseases, it is vital to gain in-sight into the perceptions which form practices and attitudes towards food safety and hygiene. This thesis will therefore engage in understanding such perceptions among vendors and consumers in Tarlac and research how these are linked to actual practices and decision-making when preparing and vending street foods and choosing a vendor.

Food safety is a scientific discipline describing handling, preparation, and storage of food in ways that prevent food borne illness (Satin, 2008). Health is an important outcome of development and health itself is vital for successful development. Availability of safe food supply including street foods is crucial to ensure the health of people. The WHO defines health as the following: “Health is a state of complete physical, mental and social well-being and not merely the absence of disease or infirmity”. Street foods and the environment are amongst the factors affecting health and development; on one hand is the impact of street foods on the environment and on the other hand are the environmental effects on food safety.

As the researcher started to research perceptions, it became evident that concepts of food as well as hygiene contamination and health risks are deeply imbedded in the social and cultural context and everyday life practices. Cultural and anthropological theories of contamination by Mary Douglas (1956) and Edward Green (1999) are therefore relevant to explain the variety of beliefs and attitudes towards safe and unsafe food. Hygiene perceptions and practices also turned out to be part of a complex system of interactions between vendors and consumers, particularly concerned with appearance and presentation. The impression management theory of Goffman will therefore add to understanding such behaviour patterns.

Personal hygiene was not also observed, as the vendors never covered their heads, handled money and food at the same time and they did not wear overcoats/aprons and handled food with bare hand. Street food vendors were not aware of hygienic and sanitary practice. The food is sold to unsuspecting clients who are likely to get food-borne diseases. Street food is food obtainable from a street side vendor, often from a makeshift or portable stall. While some street foods are regional, many are not, having spread beyond their region of origin. The food and green groceries sold in farmers’ markets may also fall into this category, including the food exhibited and sold in gathering fairs, such as agricultural show and state fair. Most street food is both finger and fast food.

According to the Food and Agriculture Organization, 2.5 billion people eat street food every day. People have a tendency to rely more and more on street vended foods to save significant time and energy since there is an increasing percentage of employed women nowadays, meaning less time devoted to kitchen. The street food industry has mushroomed to such an extent that it left uncontrolled, it would constitute a hazard to public health (Wikipedia, 2009). Concerns of cleanliness and freshness often discourage people from eating street food.

Lack of refrigeration is often construed as a lack of cleanliness or hygiene; on the other hand, street food often uses particularly fresh ingredients for this very reason. Street food is intimately connected with take-out, junk food, snacks, and fast food; it is distinguished by its local flavor and by being purchased on the sidewalk, without entering any building (WHO, 2009). Both take-out and fast food are often sold from counters inside buildings. With the increasing pace of globalization and tourism, the safety of street food has become one of the major concerns of public health, and a focus for governments and scientists to raise public awareness.

II. OBJECTIVES OF THE STUDY

1) The overall objective of this study is to assess the sanitation and hygiene of street foods vendors in Tarlac City. 2) To analyze the problem and barriers to deploying food safety system. 3) To giving supportive suggestions for the improvement of the street food safety system. 4) To find out how these relate to safe and unsafe food practices.

III. STATEMENT OF THE STUDY

This study is focus on the practices of the street vendors in handling food products regarding sanitation and hygiene. Specifically, the researcher sought to answer the following questions:

1.) Is there any significant difference in handling food of the street food vendors compared to the fast food chain?

2.) What are the street food vendors’ practices in terms of handling food?
1.1 Safety
1.2 Sanitation
1.3 Hygiene

3.) What are the possible future hygiene promotion strategies in the street food?

V. IMPORTANCE OF THE STUDY

Contamination: The act or process of contaminating something or becoming contaminated, or the unclean or impure state that results from this. Food: Material that provides living things with the nutrient they need for energy and growth. Food Safety: The assurance that food will not cause harm to the consumer when it is prepared and/or eaten according to its intended use.

Food Hygiene: All conditions and measures necessary to ensure the safety and suitability of food at all stages of the food chain.

Health: The general condition of the body or mind, especially in terms of the presence or absence of illnesses, injuries, or impairments. |

Hygiene: The practice or principle of cleanliness.

Safety: Protection from, or not being exposed to, the risk of harm or injury.

Sanitation: Conditions or procedures related to the collection and disposal of sewage and garbage. |

Street Foods: Ready-to-eat foods prepared and/or sold by vendors and hawkers in streets and other similar public places.

The Sanitation and Hygiene of Street Food Vendors. (2016, Dec 18). Retrieved from https://studymoose.com/the-sanitation-and-hygiene-of-street-food-vendors-essay 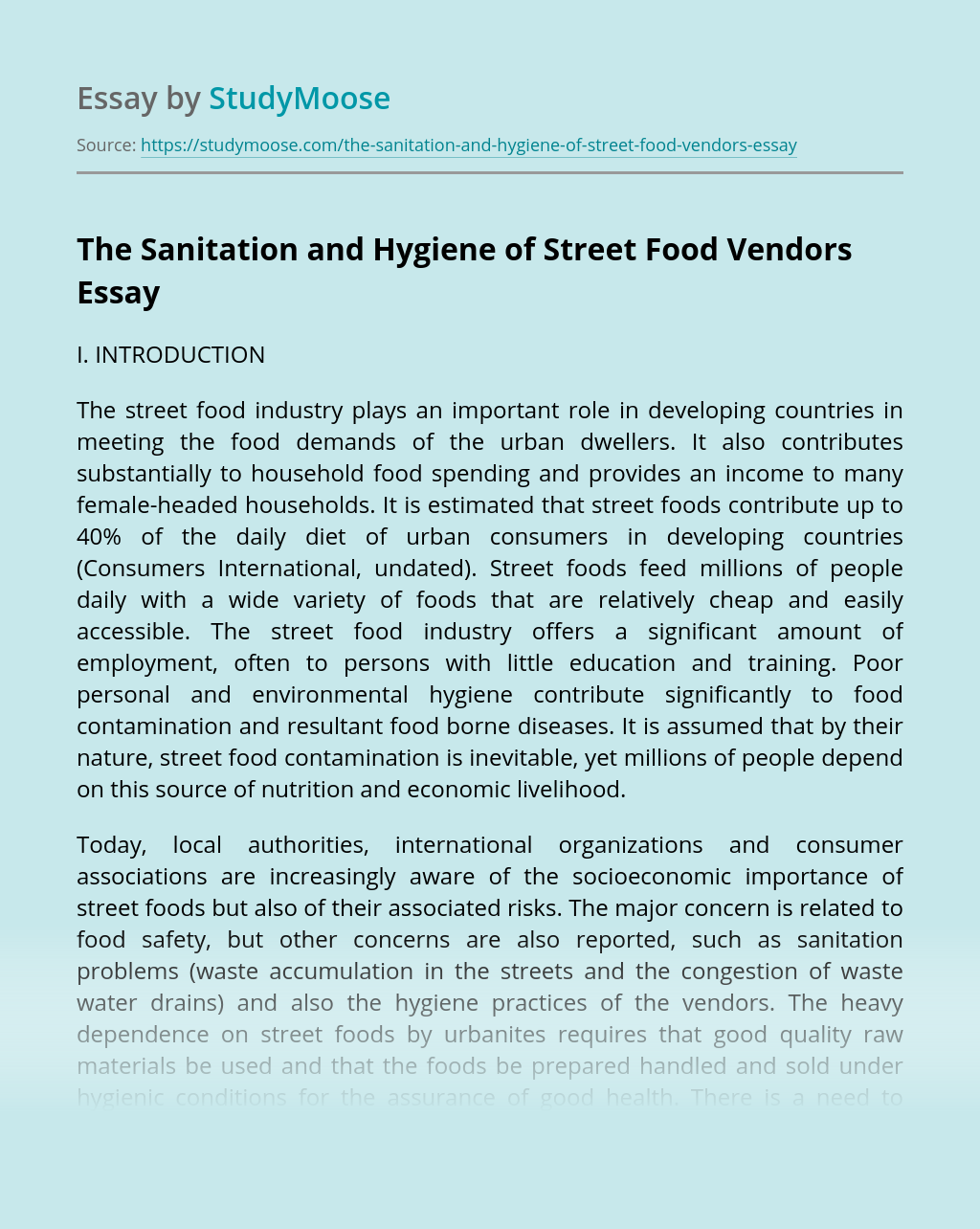 Turn in your highest-quality paper
Get a qualified writer to help you with
“ The Sanitation and Hygiene of Street Food Vendors ”
Get high-quality paper
Helping students since 2015
Stay Safe, Stay Original