Why Personal Freedom is So Difficult to Attain in Billy Elliot and Funny Boy?

Personal freedom is the confidence in oneself to ignore negative societal and familial influences in order to become an individual solely based on personal ethics and beliefs. Unfortunately, personal freedom has nearly become an extinct virtue in human beings as we are constantly being manipulated and influenced to believe what others believe. Every human has been created different and possesses unique characteristics; therefore one shouldn’t try to force or try to become someone that one wasn’t meant to become.

Don't use plagiarized sources. Get your custom essay on
“ Why Personal Freedom is So Difficult to Attain in Billy Elliot and Funny Boy? ”
Get custom paper
NEW! smart matching with writer

The novel Funny Boy by Shyam Selvadurai and the film Billy Elliot directed by Stephen Daldry are two works of art that play upon this issue of personal freedom. The two boys, Arjie in Funny Boy and Billy in Billy Elliot live in completely different cultures and yet they’re rooted down by stunningly similar gender roles, familial expectations and relationships as each boy tries to assert his personal freedom and become a unique member of society.

Arjie and Billy cannot perform the activities that they love because of the ‘cookie-cutter’ gender roles that have been laid out by their society.

Arjie is forced to give up his favourite past time, which is playing “bride-bride” because he is a boy. “Bride-bride” is viewed by his family as a feminine activity and they fear that he will become funny if he continues to engage in such activities. Thus, he is forced to play cricket with his brother Diggy so as to make him a normal or stereotypical ‘boy’ fitting in with his gender role.

Similarly, when Billy’s dad finds out that his son is taking ballet lessons instead of boxing lessons he forces him to quit ballet again because that is not what a boy is supposed to do.

Taking ballet lessons is seen as a feminine or ‘sissy’ sport and boys should not play it, rather they should be playing football, wrestling or boxing like ‘a real man’. Furthermore Arjie cannot openly express his love for Shehan because he is expected to marry someone of the opposite gender. Billy’s friend Michael also has a liking for the opposite gender but Billy does not. Michael kisses Billy in secrecy so that no one else will find out his sexuality and thus confront him asking him to explain himself for not liking girls. Thus he is not fitting his gender role just like Arjie. Hence, Billy and Arjie try to hide their respective activities from society because they contradict the gender roles that have been laid out.

Relationships in the lives of both Arjie and Billy play a huge factor in preventing as well as helping each set of individuals to achieve personal freedom. Radha Auntie’s relationship with Arjie helps him to become more confident in himself and overcome Ammachi’s punishments, while Billy’s relationship with Mrs. Wilkinson gives him a door of opportunity to assert himself and become what he truly is capable of becoming. Furthermore, Arjie’s relationship with Shehan is confusing because Arjie is exploring a new sexuality and does not know how to feel but he shares his secrets with Shehan. First he was excited and felt a strong pull towards Shehan but after the initial contact with Shehan in the storage room Arjie was quite disturbed because he felt that he had broken his family’s trust. Similarly Billy’s two relationships also contradict each other because when Mrs. Wilkinson comes over to persuade Jacky Elliot, Billy tells Mrs. Wilkinson to leave as he does not want to cause any tension between himself and his father.

Each boy must face the reality of being part of families who do not accept their individual interests and expect their children to fit in with the societal and familial norms. Arjie lives in Sri Lanka just prior to the Sinhalese-Tamil War in a well to do family who expects each of their children to be exactly like what they expect. Arjie’s family is embarrassed of the fact that Arjie is different than others because he plays bride-bride rather than cricket with the rest of the boys, thus they force him to become what they want him to become. Arjie’s dad places him into the Victory Academy because he lacks masculine qualities. He believes that if Arjie goes to a strictly boy’s school he will learn how to become a man and not turn out ‘funny’. Quite similarly, Billy’s father, Jacky Elliot, expects his son to grow up and become a miner like himself and his older brother, Tony Elliot. Jacky has trouble accepting the fact that Billy likes to play the piano.

In order to get rid of this habit Jacky destroys the piano so that his son may not become a social outcast among society. In both cases the family members are being selfish keeping their own social reputation above what their children like and desire. Arjie’s and Billy’s families fail to accept their son for what he really is – they care too much about their reputation to care for what their son loves. Thus, both Arjie’s family and Billy’s family become a hindrance in the path of their sons who want to achieve personal freedom because they expect their son to become only what they want them to become, not taking their son’s likes and dislikes into consideration.

Arjie and Billy have been forced to give up their personal freedom so that they do not become social outcasts among their own society and family. In the end only Billy is able to express his personal freedom because his father allows him to become a ballet dancer but Arjie is forced to hide his sexual desires from his parents as they move towards Canada. Even though Arjie lives in Sri Lanka and Billy lives in England, they are connected through the common hardships of gender roles, relationships and family expectations. In conclusion, they’re personal freedom becomes a way for them to grow as individuals and experience the hardships of life and the difficulty society has in accepting differences.

Why Personal Freedom is So Difficult to Attain in Billy Elliot and Funny Boy?. (2020, Jun 02). Retrieved from https://studymoose.com/personal-freedom-difficult-attain-billy-elliot-funny-boy-new-essay 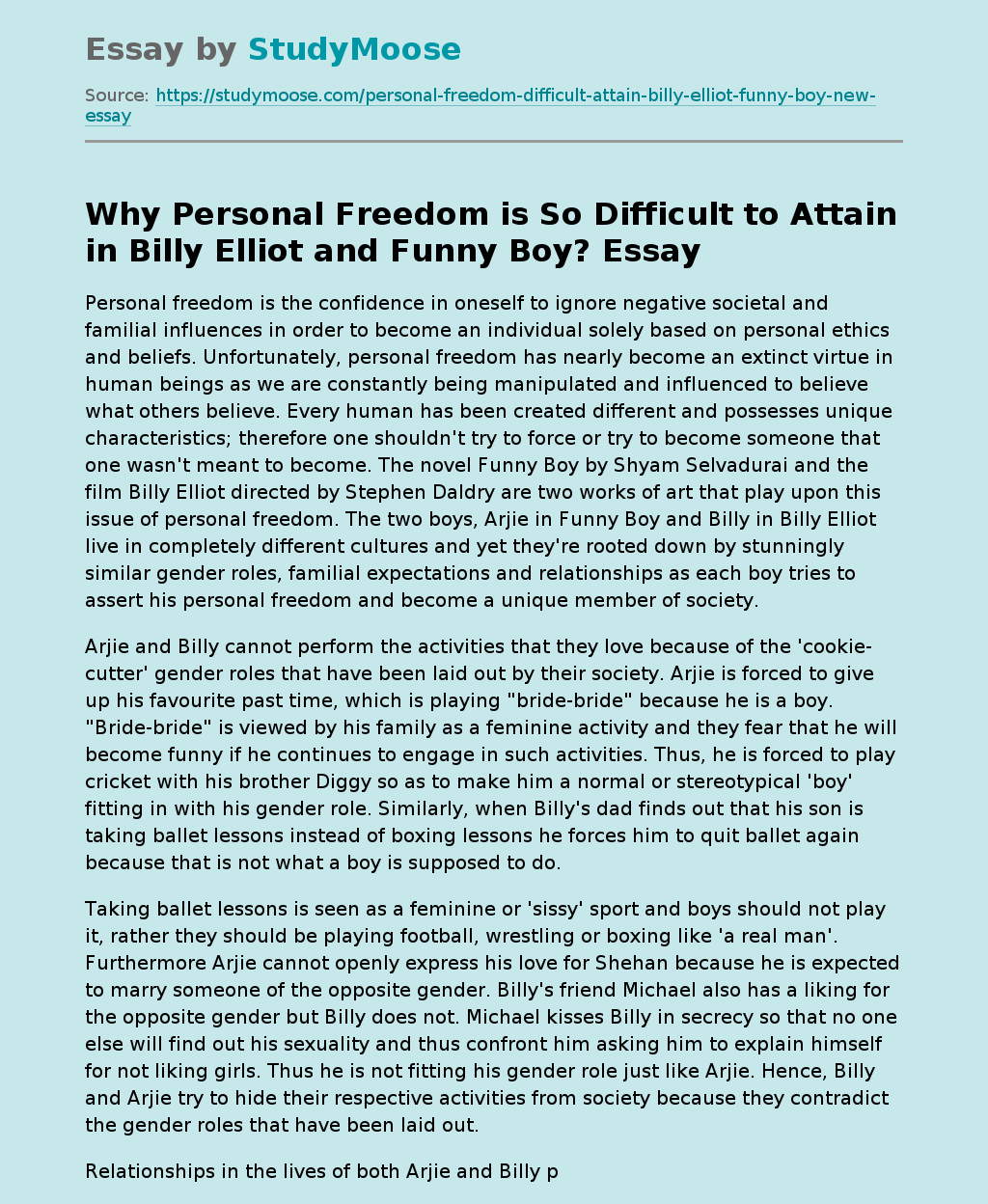