Human beings are almost always positive about knowing where they are in their life. But, they may never exactly know for certain where they maybe going or what their life will lead to. Billy Collins, the author of numerous poems including Introduction to Poetry and Schoolsville shows the aspects of this theory throughout his works. Collins provides enough details and description to let the reader know where they are when reading his poems, but not necessarily always where he is going with them.

Don't use plagiarized sources. Get your custom essay on
“ Personal Experience in Billy Collins’ Poetry ”
Get custom paper
NEW! smart matching with writer

While most poets hide information or the fine points from us, Billy Collins does not. Instead, he indulges the reader with his clear topics, literary devices and precise imagery throughout the poems. In the poem, Introduction to Poetry, Collins chooses to use a personal experience of his own to form the topic.

The poem describes him teaching to his students and telling them precisely how to write and find out the analytical meaning of a poem. Collins does this by telling his students to not express or say the underlying meaning in plain words.

He suggests discovering the meaning of the words and phrases of the poem by “holding it up to the light like a color slide” (2-3). In a literal explanation, when a person holds a colored slide up to the light they see a great diversity of colors. Similarly, when looking at a poem differently, the poem conveys multiple important messages.

The desire Billy Collins has for the reader is to illustrate the picture he is painting for them and to comprehend his style. For instance, metaphors in the Introduction to Poetry make it almost painless for the reader to understand what is in fact being said: “I want them to water-ski across the surface of a poem” (9-10). This metaphor clearly explains that Collins wants the reader to have words to ponder, but the poem should flow smooth for them like water skiing across calm water. An additional literary device Collins makes relevant is personification. He gives living characteristics to a non-living object— a poem. When Collins says, “they begin beating it with a hose” (15) he does not literally mean that the students beat the poem with a hose. In reality, he is saying that the students get so frustrated that they can’t understand the concept. If they could they would beat it with a hose to get a meaning out.

All Collins wants is for them to treat the poem with loving attention and find the underlying significance for themselves. Imagery is also a key component when reading the Introduction to Poetry. Throughout the poem, Collins includes descriptive words to form mental images of a scene in the reader’s head. He makes it so clear that when he says they “torture a confession out of it” (14) a literal picture comes to my head. I see a student strangling the poem with a rope to force the meaning out of it. Imagery is presented again when Collins states: “drop a mouse into a poem and watch him probe his way out” (5-6). As I read this I pictured a mouse scattering through a poem like he would a maze, trying to find the piece of cheese. What the author is actually trying to declare is that he wants the students to have their poems not speak the meaning in plain words. Instead the poem should have the reader engaged in the work and wanting to find the way out, or meaning.

In addition to the work, Introduction to Poetry, the poem Schoolsville also provides one of Billy Collins’ personal experiences when teaching as the topic. In the poem Collins informs the reader of how he reflects on the importance and meanings of his past. “Glancing over my shoulder at the past, I realize the number of students I have taught is enough to populate a small town” (1-3). Billy Collins means what he says word for word in these lines. This is the general idea for the poem. The topic also revolved around reminiscing and revisiting the past. Such as when Collins says, “I can see it nestled in a paper landscape” (4) he is referring to the past he had with his students. He stresses for the reader to understand that when he taught it was seen from his viewpoint only. It shows that traveling through one’s memory will eventually come to the reality of the present.

Literary devices in the poem Schoolsville not only create a purpose, but they also make the poem interesting to read when depicting them. The reader is automatically grasped to the style of the poem by Collins’ literary devices. To be specific, when the author describes the girl at the drug store “brushing her hair like a machine” (19) he gives an example of a simile. In an analysis of this, he is saying the girl is brushing her hair furious, like a machine does work furiously. Another example of a literary device in Schoolsville is how the girl “signed her papers in lipstick” (17) is an allusion to “references to Hawthrone” (21). Hawthorne was the author of the Scarlet Letter, which was a romantic novel. Therefore, the girl signing her papers in lipstick was also directed towards a romantic scene.

Although I could not relate to this poem, it hooked my imagination through the imagery. The illusion of the teacher’s town, Schoolsville, is what made it almost real by Collins’ intricate description of the population. “The A’s stroll along with other A’s” (22) was a mental sketch of A plus students dressed tidy and carrying their books walking along with others of their kind. Another illustration of imagery is when Billy Collins writes, “a bell rings on the hour and everybody zigzags” (11). Immediately, I vision myself personally in high school waiting impatiently for class to end.

As Collins did say, as soon as that bell chimes everyone from my class bolts out the door and “zigzags” through the hallways. The believability of the imaginary town is alluring to the reader. As Billy Collins writes his poetry he does so without losing the reader intentionally. The poems Introduction to Poetry and Schoolsville are descriptive, but yet easy to comprehend. The literary devices, apparent topics, and life-like imagery all contribute to what makes Billy Collins’ poems enjoyable and entertaining to read. 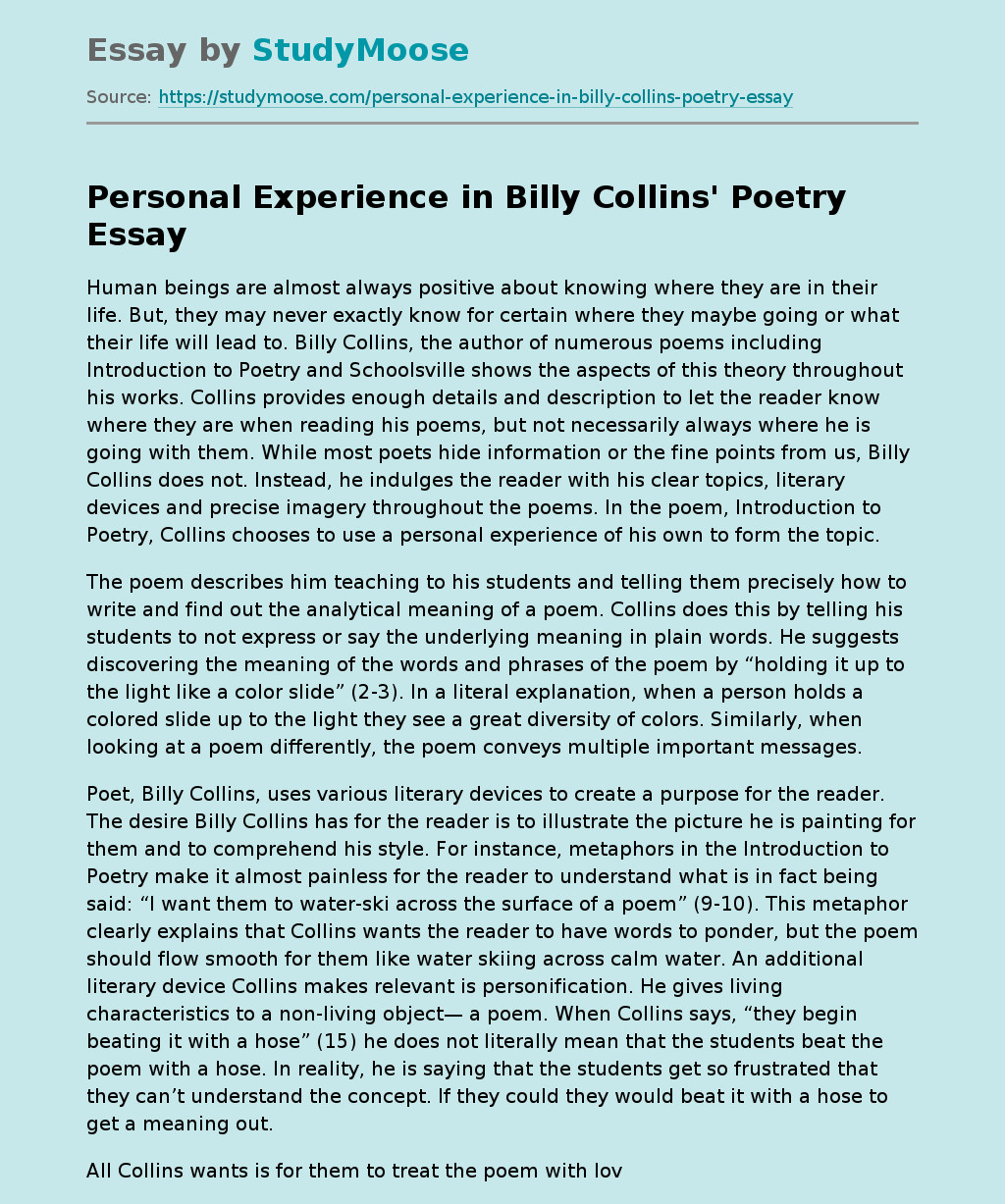