At the end, and the start of a new millennium, or world has witnessed both atrocities and amazing displays of human compassion. In The Perils of Indifference Elie Wiesel successfully portrays his thoughts by applying anaphora’s, and the distribution of both ethos and pathos.

Throughout his speech Wiesel repeats the word indifference quite often. An anaphora is the repetition of the same word or group of words in the beginning of successive clauses. “To be indifferent to that suffering is what makes the human inhuman.

Don't use plagiarized sources.
Get Your Custom Essay on Perils of Indifference Rhetorical Analysis Just from $13,9/Page

Indifference, after all, is more dangerous than anger and hatred.” Expresses the true emotional depth of the Holocaust by creating a mental picture of one having gone through pain and torture and have no emotion.

By speaking with the appropriate pauses and tone, Wiesel’s audience felt what he was trying to convey. The display of pathos in his speech grasps the reader with the vast emotions and personal descriptions of his torment and others demise.

“You fight it. You denounce it. You disarm it.”, is the rebel like feelings the prisoners continuously expressed.

Finally ethos deals with credibility. Wiesel not only lived during the Holocaust, he survived it. He fought alongside many other Jews for their survival. He gives detail on and about his friends and family stationed at the camp with him. Wiesel goes in depth with the horrid memories he and many others endured.

The Holocaust was like Hell on earth. During this era millions of Jews died for their beliefs. Wiesel has relived his experience multiple times in his book Night and his speech The Perils of Indifference. He uses anaphora’s and both ethos and pathos to successfully convey his thoughts and meanings of the Holocaust. 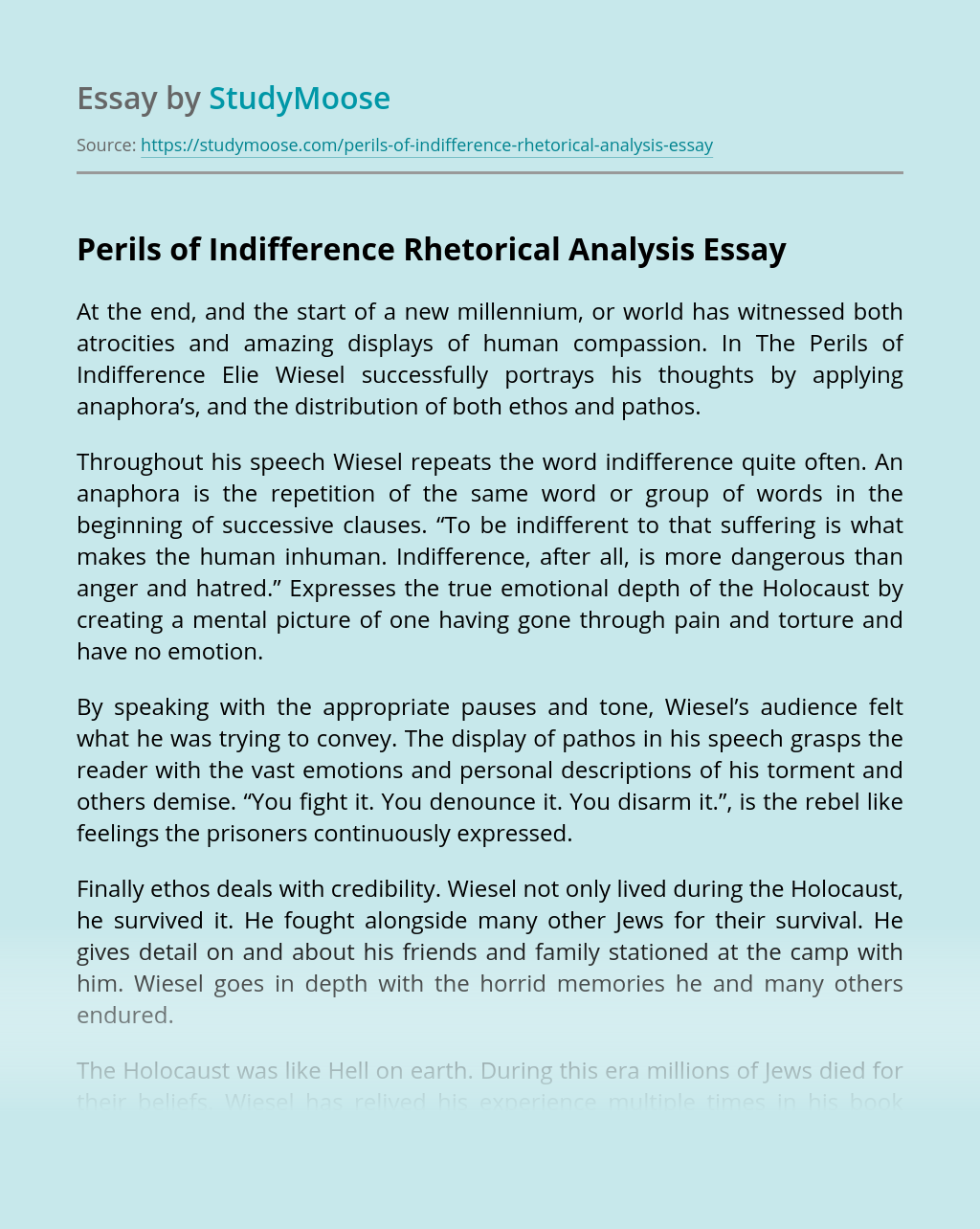 My crush is the reason of my unexplainable emotions. Every time I see him I just can’t explain my feelings, because sometimes I feel happy, excited, mad and sad. Happy every time I’m with him and when he mingled with my family in our house. I get excited because he gave surprises to me. Mad...

View sample
The Story of an Indian Woman

To those who lack the real understanding of poetry, it is seen no differently as any other literary composition; a text, written and understood by a certain group of people. However to those who appreciate, and possess even the slightest bit of understanding that the poet intended, is considered an accomplishment. Poetry is an art...

View sample
The short stories: “The Kid Nobody Could Handle”

Stress comes from variety of sources and does not seem to impact everyone in the same way. What is stressful to one person may not cause stress for another. In small doses, stress helps you to stay focused, energetic, and alert. But when stress becomes overwhelming, it can damage your health, your mood, your productivity,...