Pax Romana vs The British Empire

The British Empire covered 20% of the earth’s surface, which made it the biggest empire in the world and along with it made Britain the richest country in the world. The people of Britain in this time often referred to the British Empire as Pax Britannica, Latin for British peace. In doing so they thought that by taking over other poorer countries and bringing peace to their inhabitants, they were comparing themselves to the ancient Romans and their mighty empire which they called Pax Romana.

Don't use plagiarized sources. Get your custom essay on
“ Pax Romana vs The British Empire ”
Get custom paper
NEW! smart matching with writer

The Victorians started to believe in muscular Christianity and the white man’s burden; this means that they thought that it was their duty to take over poorer, less civilised countries and spread the great ways of Christianity to the inhabitants of the places we conquered. This though was just an excuse to go to other countries and steal their goods to make Britain wealthier. With this there came the attitude that they were better than and superior to other races and foreigners especially non-white races.

“The Man with the Twisted Lip”

We can see this is the case in “The Man with the Twisted Lip” where it depicts a foreigner working in an opium den “a sallow Malay attendant had hurried up with a pipe for me and a supply of the drug”. This is typical of the Victorians stereotypical attitude towards foreigners; they always put them in roles as bad or low lives. “the rascally lascar who runs it has sworn to have vengeance on me”.

A lascar is an east Indian sailor and this lascar owns the opium den and also commits numerous numbers of other crimes, including murder, as we can see by the quote above.

This reinforces what I said earlier as Conan Doyle cast a foreigner to run the opium den and not an English man, with the lascar committing murders like a low life. The Sherlock Holmes character informs us a lot about Victorian Britain as he was described as an infallible person, perfect in every way. The popularity of the Holmes books shows us that the Victorians valued virtuous people, whereas modern day society tend to prefer characters that are more human and have flaws.

Holmes somehow manages to solve the crimes using the smallest and simplest of clues that the majority of other people would miss, by using his amazingly intellectual brain. There is an example of this in The Speckled Band, how Holmes manages to solve the whole crime from a dog lead and a saucer of milk, this also links in with suspension of disbelief. Holmes is also descried as physically very strong and we can establish this from The Speckled Band “he picked up the steel poker, and with a sudden effort straightened it out again”.

This is Holmes bending a steel poker which would necessitate an immense amount of strength. Another thing which makes Holmes seem more than human is that he appears to read minds by studying people’s facial expressions. We see this take place in The Cardboard Box “leaning back in my chair, I fell into a brown study. Suddenly my companion’s voice broke in upon my thoughts ‘you are quite right Watson’ “, this is Holmes agreeing with what Watson had said to himself in his mind, although it would have been almost impossible to know exactly what he was thinking about at that moment of time.

Holmes – the master of disguises

Along with all his other amazing qualities Holmes is also the master of disguises, as it portrays in “The Man with the Twisted Lip” “the old man at my side, very thin, very wrinkled, bent with age… his form had filled out, his wrinkles were gone, the dull eyes had regained their fire, and there sitting by the fire, and grinning at my surprise was none other than Sherlock Holmes. ” All these different depictions shows us that not only could Holmes work out a case with barely any clues, or that he is incredibly strong without even looking it, or the fact that he can read peoples minds, but that he is also the master of disguises.

Collectively, these points go on to prove how Victorians liked characters, because to them he was their idealistic person of who they wanted to be – he was perfect in every way. Victorian Britain, although supposed to be a very ‘proper’ country, contained a very gothic element about it. The people loved the architecture of it, with grand ornate styles and spires and gargoyles as common features. The gothic style of writing was also popular then as it contained a lot of death; the style was powerful and dark, whereby black and darkness in books nearly always represented gothic elements.

The true of the Sherlock Holmes stories

This is as true of the Sherlock Holmes stories as it is with some of the other famous stories of the time, such as ‘Dracula’ and ‘Frankenstein’, both written in the Victorian era and quite often depicting gothic writing. Seen here in The Man with the Twisted Lip “a lady, clad in some dark-coloured stuff, with a black veil, entered the room” shows us that people also dressed in a gothic manner then. The Speckled Band also has many gothic references in it: “it was a wild night. The window was howling outside, and the rain was beating and splashing against the windows.”

This sets a gothic scene to when the woman gets killed, so the death and gothic style weather are being associated together here as is quite often done in films and books. “But what in the name of the devil! ” the devil is associated with gothic so they are also bringing a more demonic aspect into it. In The Cardboard Box we see more uses of gothic writing as the last two pages in the story are about death “I struck again, and she lay stretched beside him. I was like a wild beast then that had tasted blood. ” Blood is also commonly used with death which then links in with the gothic theme.

Pax Romana vs The British Empire. (2020, Jun 02). Retrieved from http://studymoose.com/pax-romana-vs-the-british-empire-essay 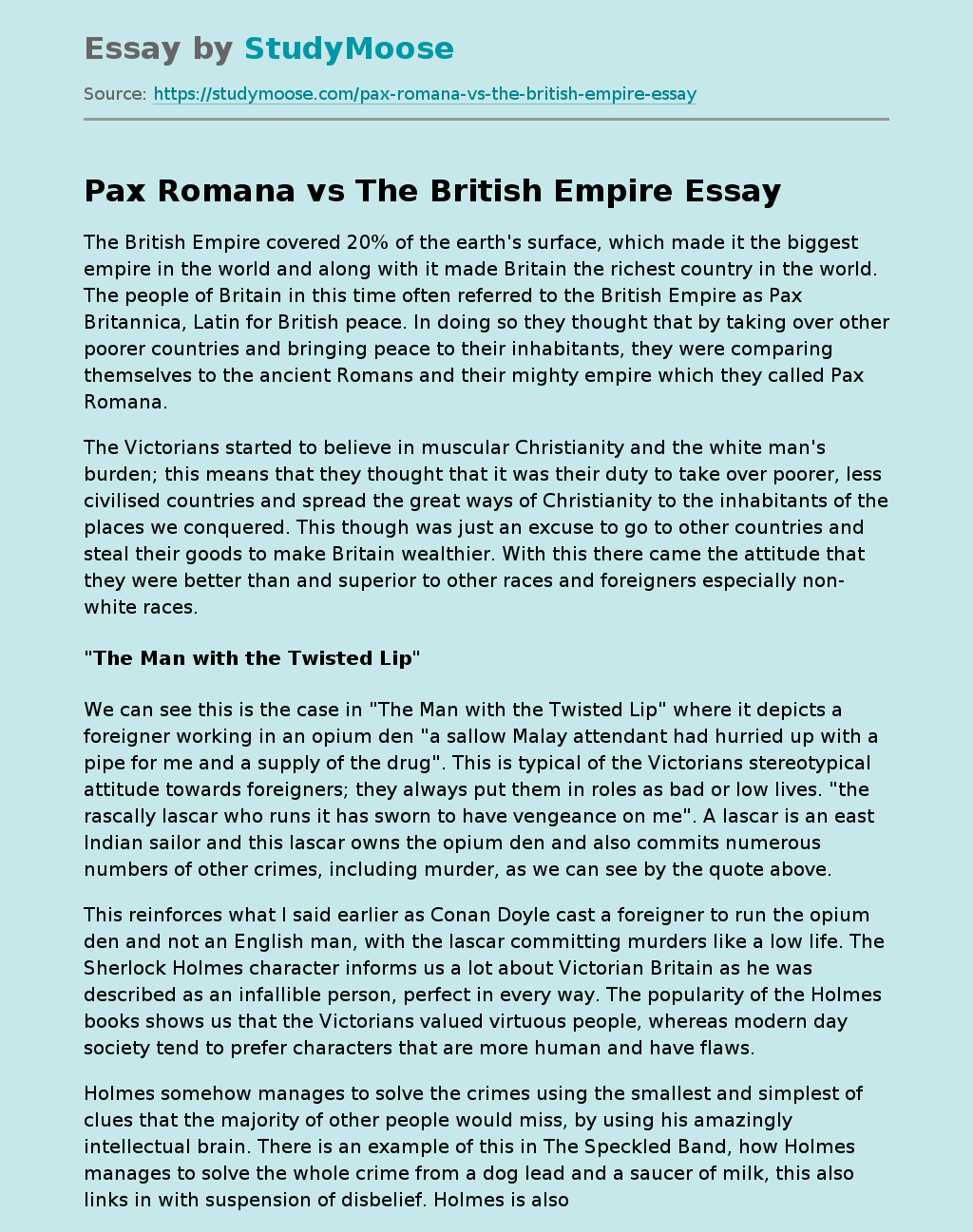