He is an American inventor, investor and philanthropist, best known as the co-founder, with Bill Gates, of Microsoft Corporation. As of March 2013, he was estimated to be the 53rd-richest person in the world, with an estimated wealth of $15 billion. He is the founder and chairman of Vulcan Inc. , which manages his various business and philanthropic efforts. Allen also has a multi-billion dollar investment portfolio including technology companies, real estate holdings, and stakes in other technology, media, and content companies.

Don't use plagiarized sources. Get your custom essay on
“ Paul Gardner Allen ”
Get custom paper
NEW! smart matching with writer

Allen also owns two professional sports teams, the Seattle Seahawks of the National Football League (NFL), and the Portland Trail Blazers of the National Basketball Association (NBA). He is also part-owner of the Seattle Sounders FC, which joined Major League Soccer (MLS) in 2009. Allen’s memoir Idea Man: A Memoir by the Cofounder of Microsoft was released on April 19, 2011. The paperback version of Idea Man, which included a new epilogue, came out on October 30, 2012. Early life and career

Paul Allen was born in Seattle, Washington, to parents Kenneth Samuel Allen, an associate director of the University of Washington libraries, and Edna Faye (nee Gardner) Allen, on January 21, 1953. Allen attended Lakeside School, a private school in Seattle, and befriended Bill Gates, who was almost three years younger and shared a common enthusiasm for computers. They used Lakeside’s Teletype terminal to develop their programming skills on several time-sharing computer systems.

After earning a perfect score of 600 on the SAT, Allen went to Washington State University but dropped out after two years in order to work as a programmer for Honeywell in Boston, placing him near his old friend again.

Allen later convinced Gates to drop out of Harvard University in order to create Microsoft. Microsoft Allen co-founded Microsoft with Bill Gates in Albuquerque, New Mexico, in 1975, and began marketing a BASIC programming language interpreter. Allen came up with the original name of “Micro-Soft,” as recounted in a 1995 Fortune magazine article.

In 1980, after promising to deliver IBM a Disk Operating System (DOS) they had not yet developed for the Intel 8088-based IBM PC, Allen spearheaded a deal for Microsoft to purchase a Quick and Dirty Operating System (QDOS) written by Tim Paterson who, at the time, was employed at Seattle Computer Products. As a result of this transaction, Microsoft was able to secure a contract to supply the DOS that would eventually run on IBM’s PC line. This contract with IBM was the watershed in Microsoft history that led to Allen and Gates’ wealth.

Departure from Microsoft In 1983, Allen, known as the “idea man” counterpart to Gates’ “man of action,” resigned from Microsoft after being diagnosed with Hodgkin’s disease, and undergoing several months of radiation treatment. As Microsoft grew and its stock steadily rose, Allen’s share in the company he co-founded made him a billionaire at just over 30 years of age. Meanwhile, Allen began to concentrate on other projects, hoping to find the next big idea lurking somewhere just out of sight.

In 1986, he set up a company called Vulcan Ventures in order to research possible investments; to that end, he founded a Silicon Valley think tank in 1992 called Interval Research. Through Interval Research and Vulcan Ventures, Allen began to put his long-term dream of a wired world society in which virtually everyone is online – into practice. Allen officially resigned from his position on the Microsoft Board of Directors in November 2000 but was asked to consult as a senior strategy advisor to the company’s executives. He sold 68 million shares of Microsoft stock that year, but still owns a reported 138 million shares. 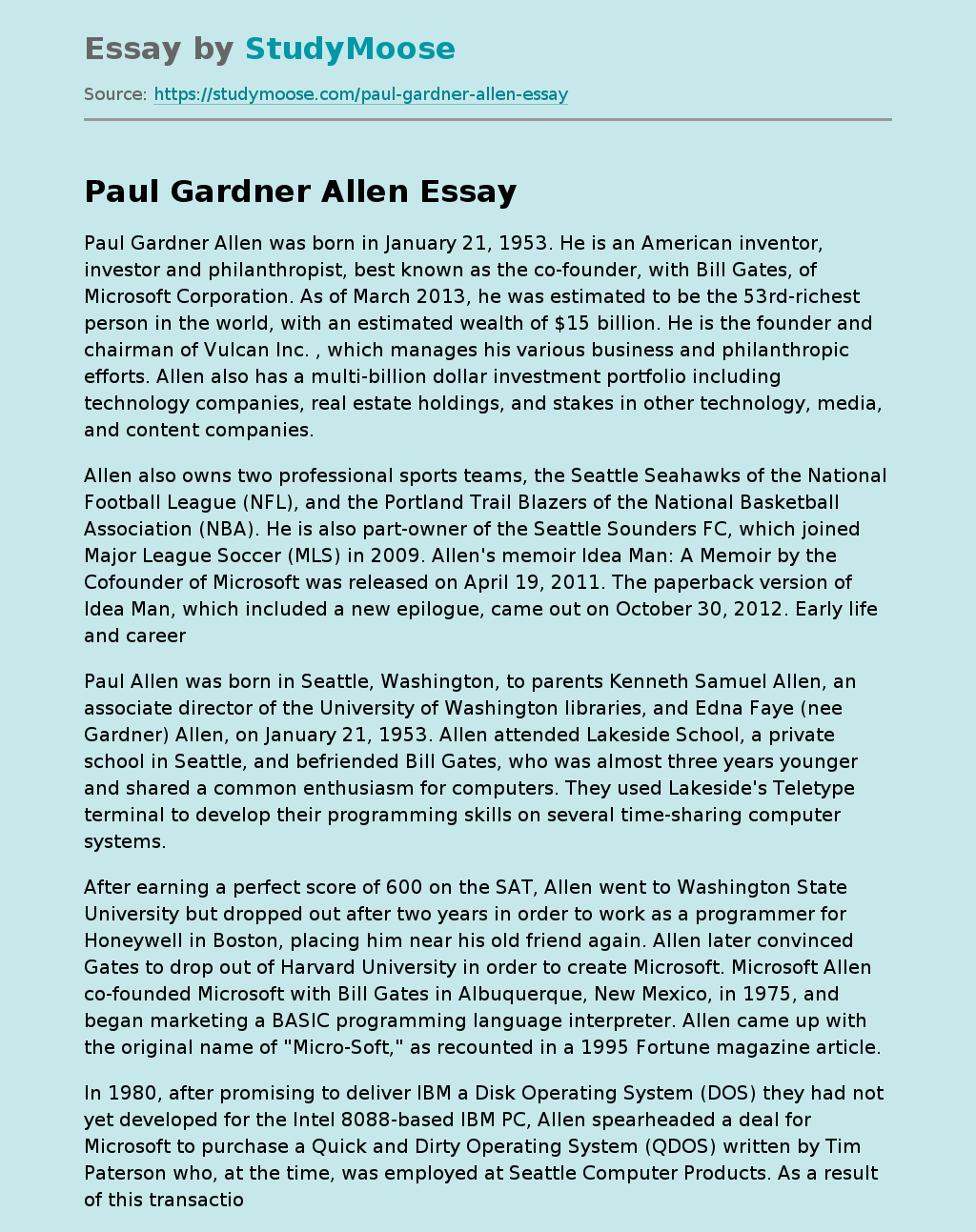