Part 1: A Comedy of Manners: The Importance of Being Earnest

How is Wilde making fun of the Victorian rules for entertaining guests?

[Jack puts out his hand to take a sandwich. Algernon at once interferes.]
[Algernon.] Please don’t touch the cucumber sandwiches. They are ordered specially for Aunt Augusta. [Takes one and eats it.]
Jack. Well, you have been eating them all the time.
Algernon. That is quite a different matter. She is my aunt. [Takes plate from below.] Have some bread and butter. The bread and butter is for Gwendolen.

Don't use plagiarized sources. Get your custom essay on
“ Part 1: A Comedy of Manners: The Importance of Being Earnest ”
Get custom paper
NEW! smart matching with writer

He shows that people will go to great lengths to get around rules in order to satisfy personal desires.
Which features of a comedy of manners are present in the passage? Check all that apply.

Algernon. Lane’s views on marriage seem somewhat lax. Really, if the lower orders don’t set us a good example, what on earth is the use of them? They seem, as a class, to have absolutely no sense of moral responsibility.

+84 relevant experts are online
Hire writer
An illustration of class differences and a commentary on marriage
How does Wilde use Algernon’s behavior to make fun of proper behavior or customs?
By having Algernon behave rudely while Algernon is criticizing Jack for behaving rudely
Which feature of a comedy of manners is present in the passage?

[Algernon.] Besides, your name isn’t Jack at all; it is Ernest.
Jack. It isn’t Ernest; it’s Jack.

Algernon. You have always told me it was Ernest. I have introduced you to every one as Ernest. You answer to the name of Ernest. You look as if your name was Ernest. You are the most earnest-looking person I ever saw in my life. It is perfectly absurd your saying that your name isn’t Ernest. . . .
Jack. Well, my name is Ernest in town and Jack in the country, and the cigarette case was given to me in the country.

The differences between country and city life
Which feature of a comedy of manners is present in the passage?
A commentary on marriage
Why is Jack confused in this passage?
Jack does not know if Lady Bracknell objects to the location of his house or the rule that says the location is unfashionable.
What does Jack’s confusion suggest about the rules that govern Victorian society?
If the rule can easily be changed, then it is meaningless.
This excerpt best illustrates which feature of a comedy of manners?

Jack. My dear Algy, you talk exactly as if you were a dentist. It is very vulgar to talk like a dentist when one isn’t a dentist. It produces a false impression.

Witty wordplay
What does Wilde’s use of humor critique in this excerpt?

[Lady Bracknell.] I have always been of opinion that a man who desires to get married should know either everything or nothing. Which do you know?

Jack. [After some hesitation.] I know nothing, Lady Bracknell.

Lady Bracknell. I am pleased to hear it. I do not approve of anything that tampers with natural ignorance. Ignorance is like a delicate exotic fruit; touch it and the bloom is gone. The whole theory of modern education is radically unsound. Fortunately in England, at any rate, education produces no effect whatsoever.

Lady Bracknell. Pardon me, you are not engaged to any one. When you do become engaged to some one, I, or your father, should his health permit him, will inform you of the fact. An engagement should come on a young girl as a surprise, pleasant or unpleasant, as the case may be. It is hardly a matter that she could be allowed to arrange for herself . . .

Imply that young women do not have a choice in their own marriages.
How is humor used in this excerpt to effectively critique marriage?
Algernon pokes fun at the fact that marriage in his society often is based on social rules, not romance.
Which of these are features of a comedy of manners? Check all that apply.
Witty wordplay, concern with appearances, differences between social classes and differences between country and city life
How does Wilde use this conversation to poke fun at the class divisions of his day?
Algernon holds his servant to an unreasonable standard because he expects the lower classes to be good examples for the upper class.
Which line from The Importance of Being Earnest best makes this point?

Oscar Wilde’s humor points out that many people are not who they appear to be, which is a critique on the emphasis placed on appearance in society.

“Well, my name is Ernest in town and Jack in the country . . .”
Which line from The Importance of Being Earnest highlights the divide between the social classes in Victorian society?
“Really, if the lower orders don’t set us a good example, what on earth is the use of them?”
Which line from The Importance of Being Earnest shows the difference between city and country living?
“When one is in town one amuses oneself. When one is in the country one amuses other people. It is excessively boring.”
Shirley Quinn
Share

Part 1: A Comedy of Manners: The Importance of Being Earnest. (2017, Dec 08). Retrieved from https://studymoose.com/part-1-a-comedy-of-manners-the-importance-of-being-earnest-2-essay 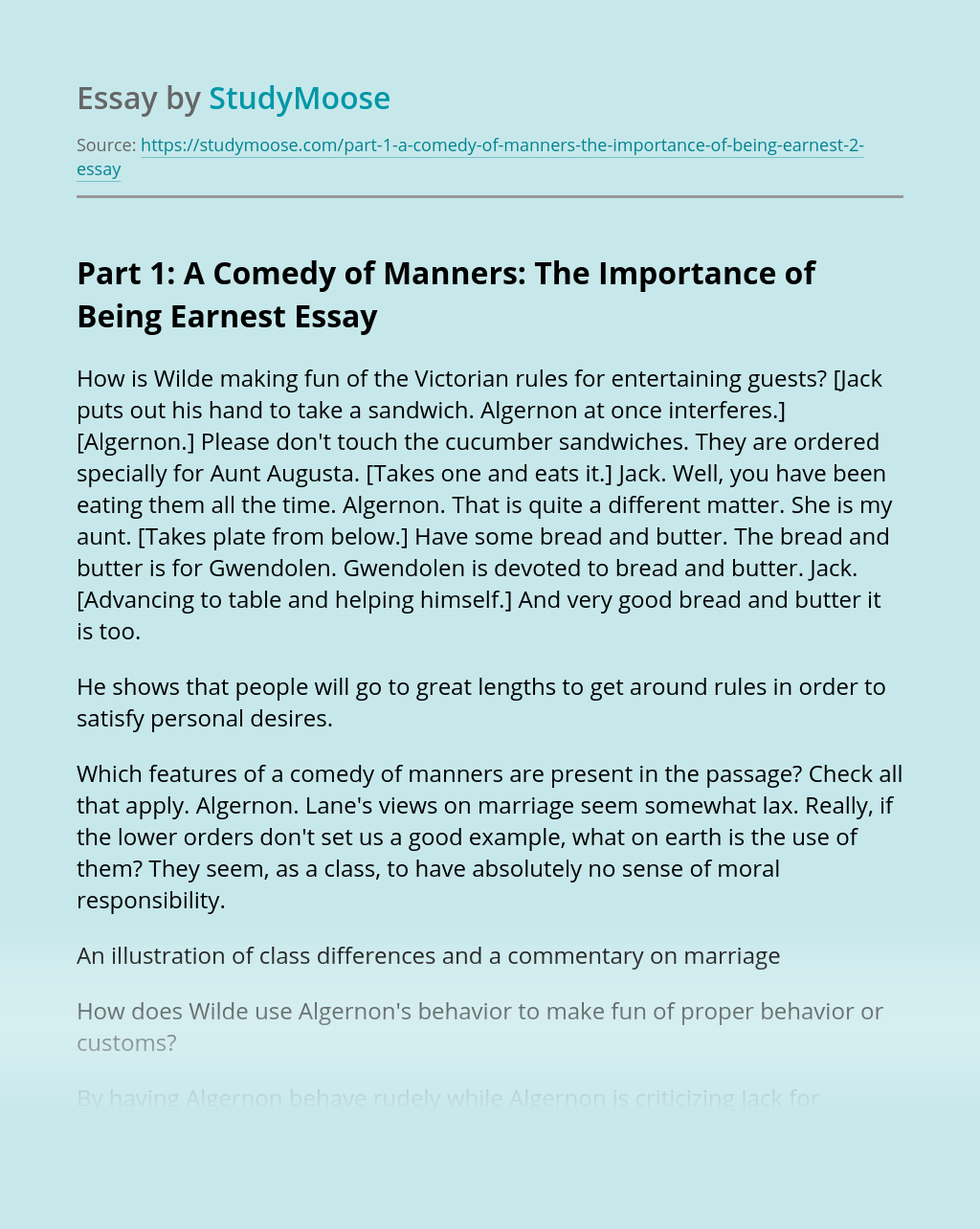