For years, literary works have discussed the difference of nature vs. nurture, William Faulkner’s Barn Burning being one of them. Nurture in the debate refers to the way a person is brought up through his or her life. The argument is that the nurturing of the child in its early years is what ultimately defines how that person will act. On the other hand, another way of thinking is that nature defines who a person is. That it is not how a person is raised or what they grew up around, but who that person is inside.

Don't use plagiarized sources. Get your custom essay on
“ Parents And Children Relationship in Faulkner’s Barn Burning ”
Get custom paper
NEW! smart matching with writer

The fundamental difference is that said person is born the way they are going to grow up to be and is not shaped by his or her parents and how they act. In Faulkner’s Barn Burning, Sartoris Snopes is nurtured by his ill-willed father but ultimately takes the high road and chooses to be his own person rather than follow the road of his father.

Sartoris’ life had previously been defined by instability and always covering for his father, until they came along the de Spain house. From the beginning of the story, Sartoris wanted to tell the truth at the court room but got slapped by his father for even the thought. “You’re getting to be a man. You got to learn. You got to learn to stick to your own blood or you ain’t going to have any blood to stick to you. Do you think either of them, any man there this morning would?” Mr.

Snopes was just trying to make sure that his son would always protect his twisted ways in any future court room. He did not care about teaching his son a life lesson about loyalty or that blood was thicker than water, which was not what the talk that night in the woods was about. It was just simply Mr. Snopes warped way of assuring he would not get in trouble for future acts of harm. And sure enough, there were more acts.

Even though Mr. Snopes slapped Sartoris and told him to stay true to his family, the de Spain house sparked a change in Sartoris and marked the end of following his father’s footsteps. His father’s way of raising him was almost a reign of terror. No one ever knew what to expect from him. He was not a good man in any sense of the word. He stole horses in the war from the Confederacy for his own benefit, having no loyalties to either side. The only loyalty he has ever had has been to himself. His wounded leg, as a result of the war, symbolizes the weight he carries around by living his perverse way of life. That is, feeding off of the harm he has caused to others; he has always felt that most people have short-handed him. The incident in the story in which Mr. Snopes ruined the one hundred dollar rug focused on how the leg was the major part of his body that took part in the smearing of the dung. It also was the main factor that let the de Spain’s know he had returned the ruined rug. Once they realized that he had permanently altered the rug, it was back to court for the Snopes family.

Again, Sartoris witnessed his father being untruthful in the court of law and again his innate nature was to tell the truth. Yet always in the background is the gnawing feeling of what his father would do to him if he was disloyal. So when does he go against what he was raised to do and become his own person? Sartoris’ entire life had been to follow behind his father without question if it was right or wrong. As a small child he might not have wondered whether Snopes’ actions were morally acceptable or not, but as he grew older and developed his own conscious, he soon realized that he was a different person with a different way of thinking than his father. For his father, barn burning was his way of releasing anger and getting back at the people who have done wrong in his mind.

Even though the nigger at the de Spain house did not do anything personal to him, Snope thought that because he told him he could not be on the rug, that he should destroy it so no one else could be on it either (symbolically.) When his son made the brave decision to tell the de Spain’s about his father’s plan, it was the turning point in his life. He finally diverted from his life-long path behind his father and started to plot a new course for himself. A life that would be defined by justice and virtue. Faulkner’s Barn Burning deals with nature vs. nurture in a coming of age story by which Sartoris untimely chooses nature and to chart his own way in life. After his father’s death, Sartoris Snope is described as walking into the darkness of the woods ahead without looking back and hearing the song of birds in the distance. He is forever cut off from his family and must survive alone. The only thing he has left is his integrity and strong sense of justice, but hopefully for him that is all he needs. 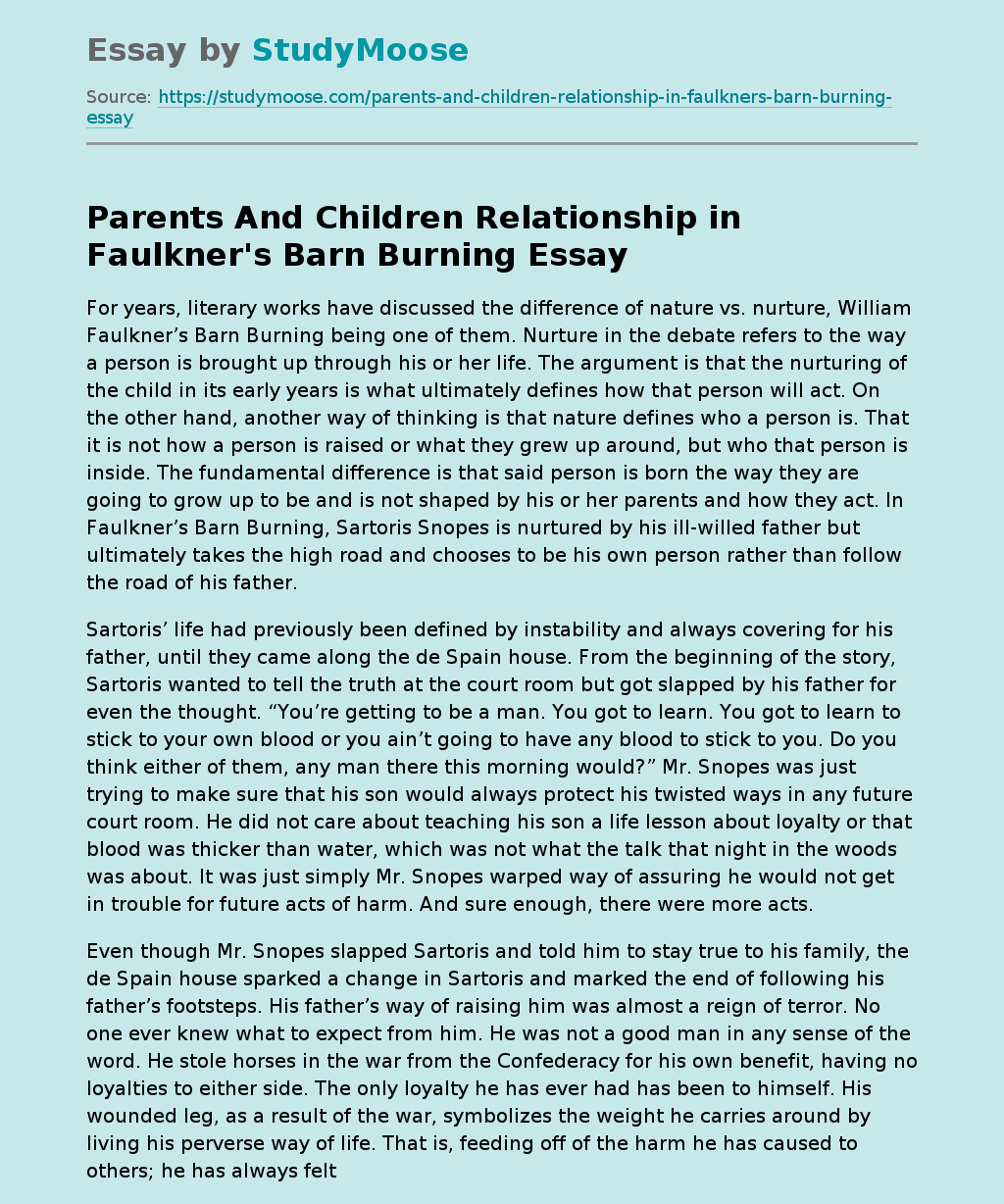