Parenting in A Straight Bat

Parents often have ideal ways they want their children to be; sometimes they don’t give them any freedom to choose. “A Straight Bat”, written by Roger Holt, is a short story about George who wants his son to become a great cricket player just like him even though his son, Timothy, doesn’t want to and wants to play the violin. This reading will be related to the dominant reading where readers sympathise with the son and see the father as an overbearing and oppressive man.

Don't use plagiarized sources.
Get Your Custom Essay on Parenting in A Straight Bat Just from $13,9/Page

This is demonstrated through the speech of George. Before Timothy goes to his boarding school George gives him a cricket bat as a present. “What do you say?” This shows us how controlling he is towards his son.

George also reminds him that he must become a good cricket player. “You must score lots of runs with it, Timothy… Hundreds of them” He expects his son to love cricket and to become a star just like he was when he was at the same school. He doesn’t give his son any freedom to do what he wants to “You have a tradition to keep up. Your father still holds the record for the quickest century” he expects his son to be just like him. Through the speech of George we can see that George expects too much from his son and tries to control how his son lives. We sympathise with Timothy and see him as a weak character that is suppressed by his father. This can be seen in the speech and the actions of Timothy. After receiving the cricket bat Timothy isn’t very excited about it and wasn’t too interested. His father says “What do you say?” and he replies with “Thank you, Daddy” as if he was being controlled by his father. “Timothy stared at the wall in front of him and thought of the violins.” He is fascinated by violins and isn’t very interested in playing crickets yet his father is still pushing him to play cricket. Timothy’s individuality is suppressed by his father and this is shown through his actions and words. The one sided relationship between Timothy and George can be shown through the actions of the characters. When George gives Timothy the bat and expects him to become a cricket player it’s almost like he is caging a bird, Timothy doesn’t really want to play cricket but there isn’t much he can do.

He swaps his cricket bat for a violin and it’s like he is free from his cage. When hisfather finds out about this he is furious and even smashes the violin “With a swift downward motion George smashed the violin across his knee.” The smashing of the violin is like Timothy getting his wings clipped and he is stuck in his cage forever. “He threw the ball back to his father and prepared himself for a lifetime of playing a straight bat on a pitch” After having his violin broken by his father Timothy has given up and just prepares to play cricket just like his father. In this father son relationship George is basically just forcing Timothy to live just like him and this is shown by the actions of the two. In conclusion the George is seen as restricting Timothy’s freedom to do what he wants to do, this is illustrated by the words and actions of the characters. Sometimes parents expect too much from their children and it can damage the relationship between them.

Parenting in A Straight Bat. (2016, Apr 04). Retrieved from https://studymoose.com/parenting-in-a-straight-bat-essay 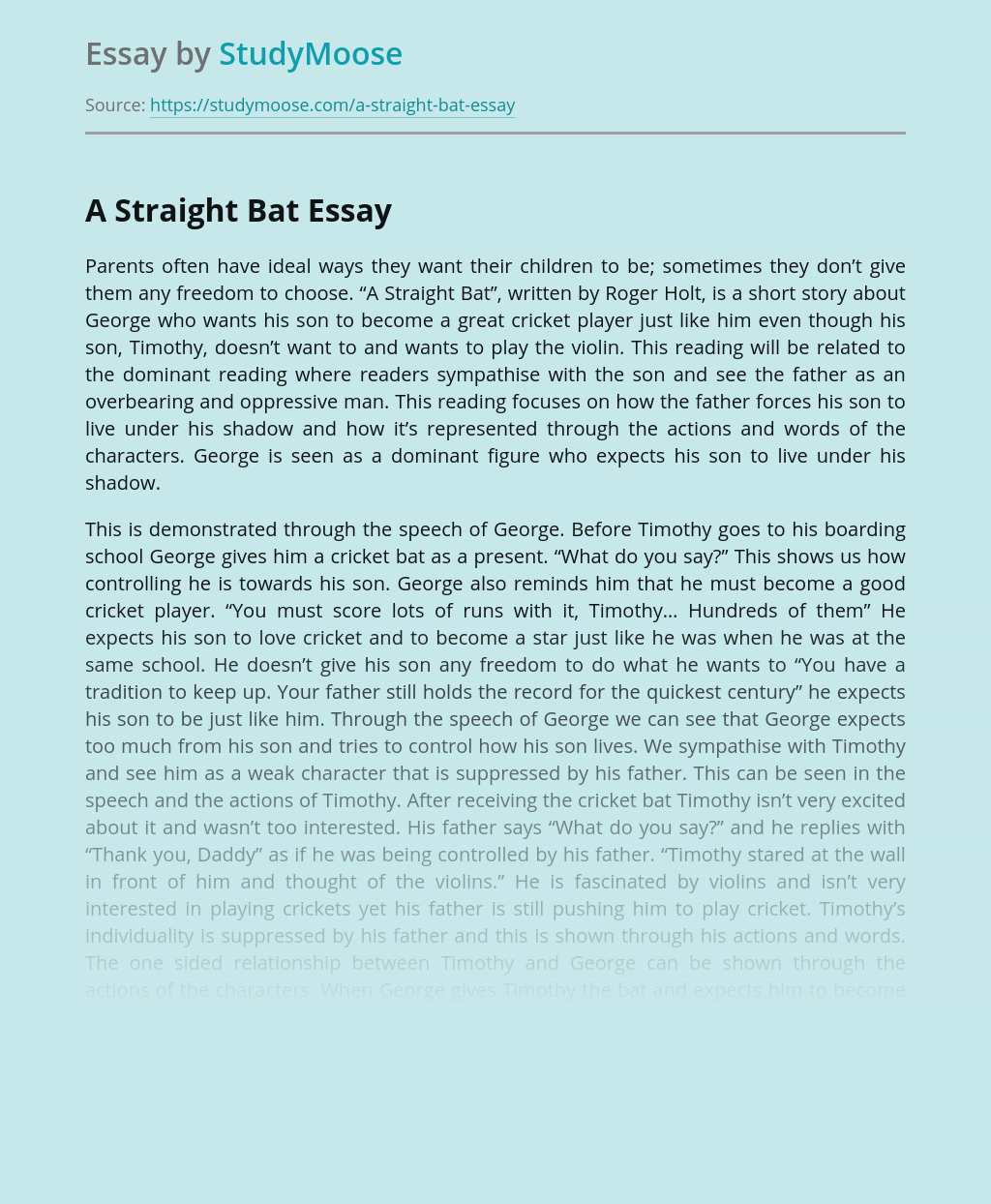 3 mistakes of my life

Sachin Ramesh Tendulkar (Listeni/ˌsətʃɪn tɛnˈduːlkər/; born 24 April 1973) is a former Indian cricketer widely acknowledged as one of the greatest batsmen of all time, popularly holding the title “God of Cricket” among his fans. Some commentators, such as former West Indian batsman Brian Lara, have labelled Tendulkar the greatest cricketer of all time. He...

Get Essay
Sports in India

Sharply differing perceptions make it rather difficult to properly assess India’s standing in the world of sports today. The pessimists love to paint a gloomy picture of the Indian sports and its detractors, too, are eager to point out that for a nation of India’s size and population its sporting successes are few and far...

Professional cricket player. Largely considered cricket’s greatest batsman, Sachin Tendulkar was born April 24, 1973 in Bombay, India, to a middle-class family, the youngest of four children. His father was a professor while his mother worked for a life insurance company. Named after his family’s favorite music director, Sachin Dev Burman, Tendulkar wasn’t a particularly...

In South Asia during 1880-2005 politics gained an uncommon bedfellow. Cricket was presented to India by Great Britain for a function that was widely discussed. Some believed cricket brought their individuals together and unified various castes and cultures within India and Britain, some believed the sport was just another way for the British to rule...