Paper on Haroun and the Sea of Stories

A tale of adventure can pertain to an individual’s journey, whether it is a story in which the character physically journeys from one place to another, or a story encompassing a journey within the character. Salman Rushdie’s Haroun and The Sea of Stories takes readers on a journey of their own as they experience the enchanting tale of a young boy, Haroun, and his heroic journey from one realm to another. In a way, this story amounts to the structure of the standard hero’s journey, however revising the structured way the series of events unfolds.

Don't use plagiarized sources. Get your custom essay on
“ Paper on Haroun and the Sea of Stories ”
Get custom paper
NEW! smart matching with writer

Characteristic of a hero’s myth, Haroun is an ordinary young boy at the beginning of the novel. His father tells stories, yet never comes forth with a legitimate explanation of their creation. As it turns out, the stories that Haroun’s father has told are in fact magically gathered from a different world than is known to ordinary man. Haroun encounters the magical water genie that provides his father with his flow of stories.

This water genie notes the beginning of a profound journey between different worlds and environments, working to spark realizations and character evolvement.

The mystical world created by Rushdie envelops the reader as the context lays out incredible imagery—immense enough to pull one into its story like a harsh tide could pull back into the sea. A mythic hero journey typically begins with an ordinary character, called to adventure for one reason or another. In Rushdie’s work, Haroun embodies this heroic character, when he realizes he is at fault for his father’s inability to continue with story telling.

When he encounters the water genie, the genie becomes his mentor in a sense—bringing him from the ordinary world to his magical world of stories, where Haroun will be able to save his father’s stories. The reader becomes increasingly aware of Haroun’s motive and drive when he drinks a certain wishwater and sees his father’s face in his mind: “just do this one thing for me, my boy, just this one little thing” (Rushdie, 70). With this motivation, Haroun proclaims himself a hero for a cause—his father. However, as the story progresses, he becomes all the more heroic as the story land is faced with problems of its own and Haroun steps in to help.

Haroun crosses into a new realm, as a hero would in a mythic story, yet does so without knowing his ultimate cause. Furthermore, a standard hero typically has a point in which he doubts going on the journey or quest. This becomes a waiting period in which the hero is depressed or setback. Haroun experiences his setbacks in different ways, which revises the natural alignment of the hero tale. He faces a problem in which he cannot focus for more than eleven minutes, and because of this cannot focus enough to effectively use his mind.

When he fails to make the wishwater useful, he feels like a failure, as typical for a hero at this point of doubt. However, this moment is quick and does not hold much significance until the end of the novel, when he can finally use his attention for beneficial outcome. A hero story is incomplete without an ultimate enemy and an army to help back the heroic cause. Through his journey, Haroun stays true to this plot of the heroic myth, and creates a set of allies when he explores this new world. He meets the bird Iff, the floating gardener Mali, the page Blabbermouth, and of course the water genie.

After his allies have been collected, Haroun is made aware of the enemy: Kattham Shud. Upon hearing his name, “Haroun felt his blood run cold” (75). After the enemy has been pronounced, another journey is to be taken to rid the land of stories of its troubles. Haroun’s father somehow winds up on the second world and aids in this heroic feat. The story continues with multiple themes of the typical heroic myth, including the conquering of the enemy, a profound heroic moment and realization, and the return home.

Haroun is still a young boy, but he has become a hero and has matured with the soul of a man. His accomplishments match those of a mythic hero story, yet they differ in the sense that he is a boy, and needs guidance and support from elders and those with more knowledge. Additionally, the story did not play out exactly how one would ordinarily unfold. However, this story of heroic accomplishment and inward stride is one representing a story of ultimate journey: both inward and outward.

Paper on Haroun and the Sea of Stories. (2018, Jul 07). Retrieved from https://studymoose.com/paper-on-haroun-and-the-sea-of-stories-essay 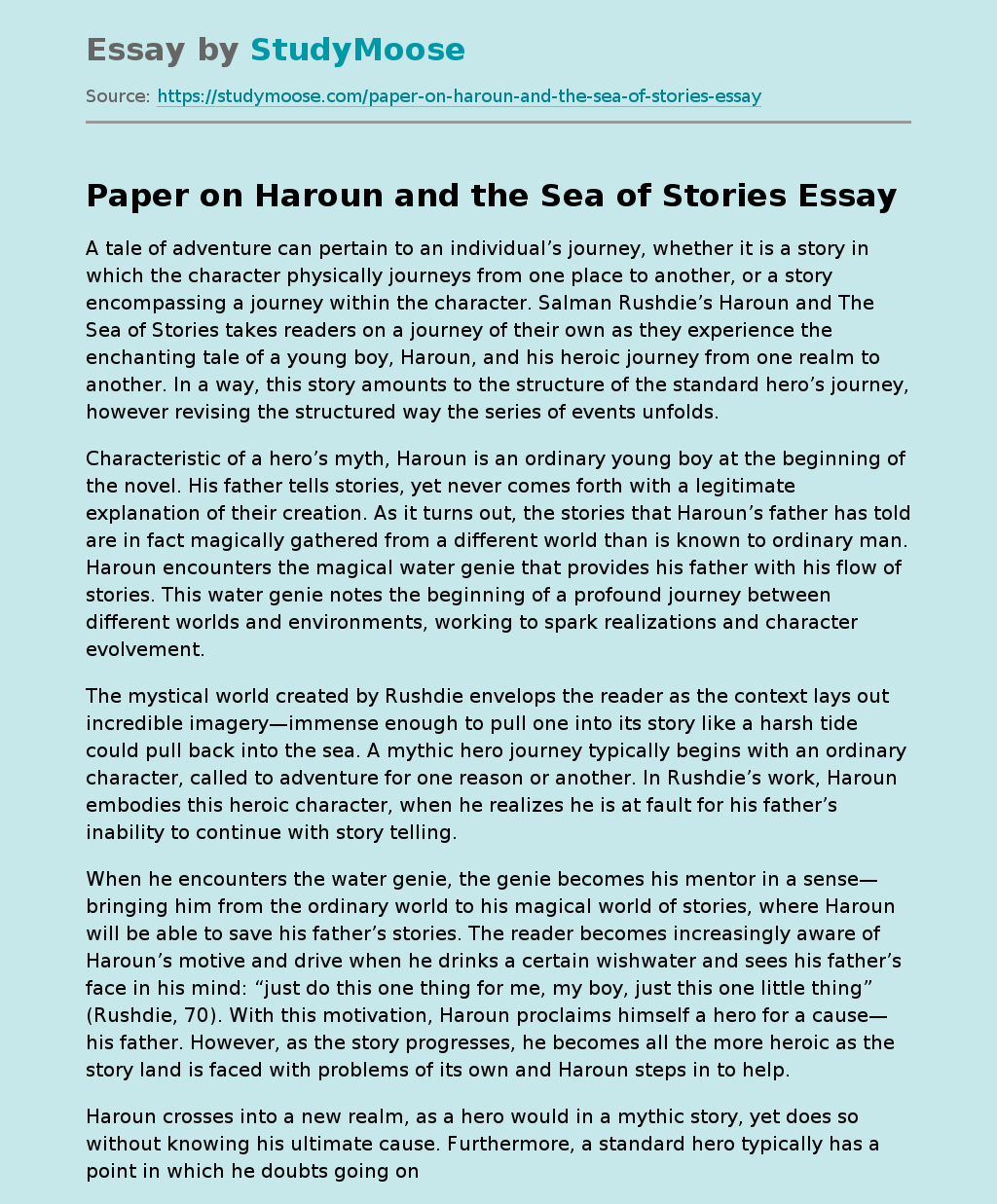