Over 50 years of cancer therapy history reveals complete clinical responses from divergent forms of therapies (e.g., chemotherapy, radiotherapy, surgery, vaccines, autologous cell transfers, cytokines, monoclonal antibodies) for advanced solid malignancies. Hepatocellular carcinoma (HCC) is the most common primary liver cancer according to Siegel, Miller and Jamal (2019) from American Cancer Society and usually develops in patients with previous diagnostic of liver cirrhosis and represents the second most common cause of cancerrelated death. Potential curative therapies include resection, liver transplantation, and local ablative therapies, usually with good results if the tumor is in early stages, characterized by small tumors limited to the liver.

Don't use plagiarized sources. Get your custom essay on
“ Over 50 years of cancer therapy history reveals complete clinical responses from ”
Get custom paper
NEW! smart matching with writer

(Merckel et al, 2016)Cryoablationo also called cryosurgery and cryotherapy is a procedure in which an extremely cold liquid with an instrument called a cryoprobe is used to freeze and destroy abnormal tissue. Cryoablation is used to treat certain types of cancer and some other conditions. A report about the first clinical experience with high-intensity focused ultrasound system for breast cancer ablation, was published by Merkel et al (2016). Also mentioned by Harding, Pompei, Burmistrov, and Wilson (2019) during the past decades, breast cancer treatment has evolved towards less invasive local treatment, called Breast-conserving therapy (BCT), like lumpectomy with additional radiotherapy, and is currently standard-of-care in patients with early-stage breast cancer and has shown equal survival rates compared to radical mastectomy.

A range of minimally invasive techniques holds promise for replacing lumpectomy by local breast tumors ablation, for example cryoablation, radiofrequency ablation or microwave ablation. Primary hepatocellular carcinoma also is one of the most common malignancies worldwide. Surgical management, either resection or transplantation, is considered definitive treatment, however, less than 20% of patients are candidates. Thermal ablation modalities such as radiofrequency ablation and microwave ablation have evolved such that these modalities have been applied with curative intent. Moreover, thermal ablation has demonstrated efficacy in treating early-stage tumors and can be offered as first-line treatment in patients with uncomplicated disease. Salati, Barry, Ma & Liu (2017) reviews explain that attributing to refinements in technology and techniques and recent studies evaluating stereotactic ablative body radiotherapy have shown promising results, while irreversible electroporation, an emerging modality, may further expand the role of ablative therapy in treating potentially resectable hepatocellular carcinoma.Cryoablation could be a well-established therapeutic regime for the treatment of diverse cancers accepted by the American College of Radiology (ACR, 2018). While usually thought of as an easy ablative mechanism counting on primarily physical destruction of cancer cells, cryoablation is now understood to be a sophisticated, combinatorial therapy involving a complex cascade. Freezing primarily based cell stress connected physiological-based destruction (apoptosis) happens over hours to days. Further, the prolonged cytotoxic effects of vascular harm and inflammation could occur over several days to weeks.The purpose of this study will investigate the advantages of the use of the cryoablation treatment in relation with surgical resection in both types of cancers selected for this review: Hepatocellular and Breast Cancer.Significance of the Practice ProblemCancer is one of the main causes of mortality in USA and the World, from the Cancer Facts & Figures 2018, of the American Society of Cancer, the following data are available:In 2018, an estimated 1,7 million new cases of diagnosed cancer more than six hundred thousand people died from cancer. 1. Breast cancer is one of the most common cancers, also liver cancer has high prevalence between types of cancer.2. There is an estimated of 15.5 million cancer survivors in the United States and is expected to increase to 20.3 million by 2026.3. Estimated national expenditure related with cancer care were $147.3 billion in 2017. In future years, costs are likely to increase as the population ages and cancer prevalence increases.Cryotherapy is an alternative cancer treatment considered a localized therapy when surgical removal of a tumor may be difficult or, for some patients, impossible. Its long-term effectiveness is still being examined. Now a days, little published data deal with the long-term results of percutaneous cryotherapy. It is known that only treat disease at a single site, either it cannot treat cancer that has spread to other parts of the body, also because physicians that treat the tumors only see on radiologic images, microscopic cancer may be missed. Although its use in the bone, kidney, liver and lung is promising, percutaneous cryotherapy research is ongoing to determine longer term clinical outcomes.Research QuestionWhich are advantages of cryoablation treatment versus open approach tumor removal in Hepatocellular cancer and Breast Cancer?To conduce this study with that research question, it will be helpful to review cryoablation treatment compare with traditional surgery removal of tumor in Hepatocellular cancer and Breast Cancer, compare survival rate in both treatments and identify protocol of access of patient to this treatment. 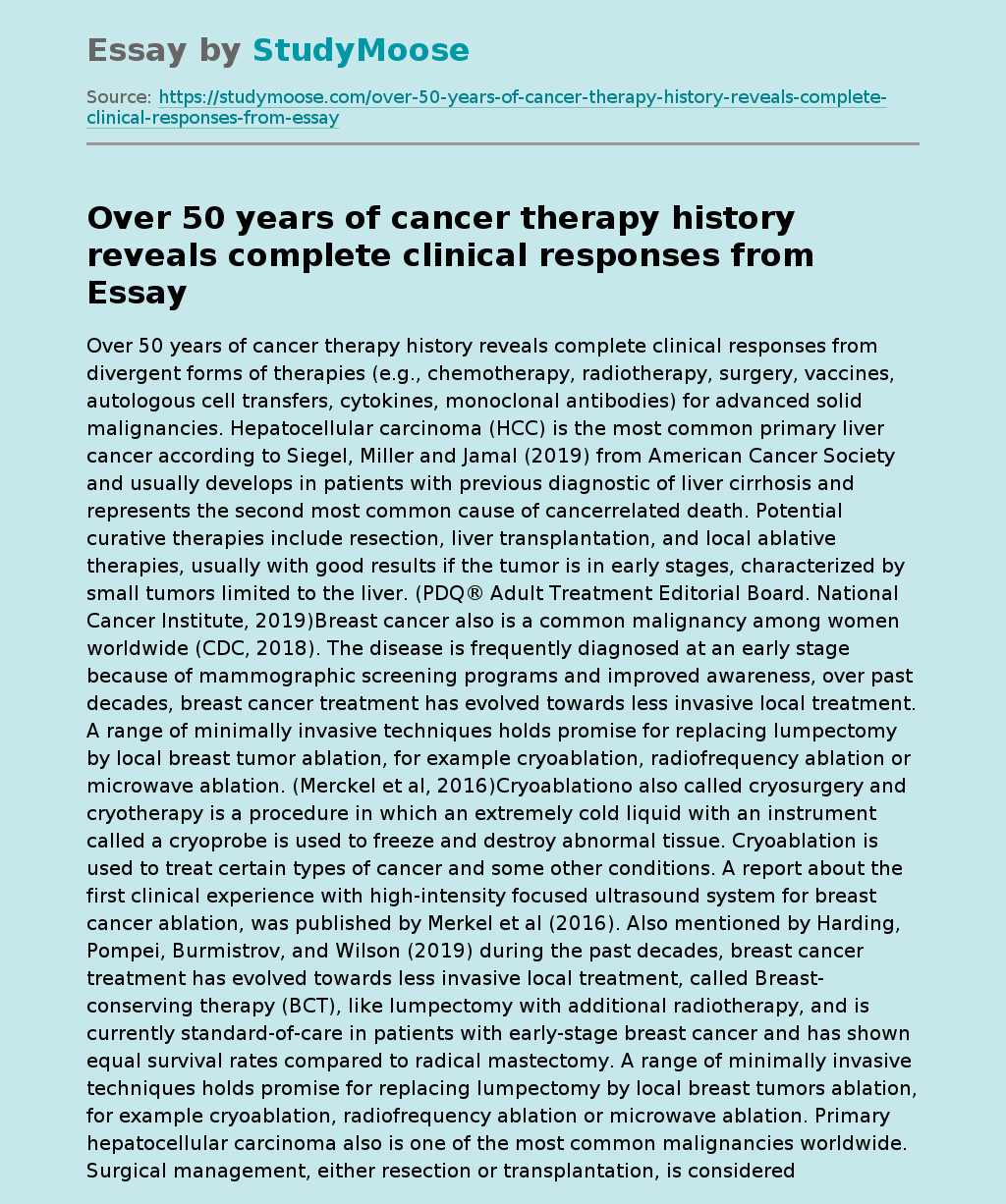