Outline and evaluate explanations of obedience

There are several proposed explanations of obedience that can be separated into two sub categories, situational factors and individual factors. Legitimate authority is one explanation of attachment and it refers to the people that appear to have power or authority. For instance, a person wearing a uniform may seem to have authority and for this reason a person may choose to obey them as shown in Bickman (74). Bickman directly tested the effect of a uniform in his field experiment in New York in which he asked passersby to pick up a piece of litter, stand the other side of a stop side or give a stranger money.

Don't use plagiarized sources. Get your custom essay on
“ Outline and evaluate explanations of obedience ”
Get custom paper
NEW! smart matching with writer

Half of the time the person giving the order was dressed in a security guard’s uniform and the rest of the time in street clothes. This idea can also be applied to settings, if a setting seems formal and gives the impression of legitimacy then it is speculated obedience levels will increase as demonstrated in Milgram’s study in combination with some of the variations of his study.

Another explanation of obedience is when there are buffers present.

If there are buffers there are aspects of the situation that protect people from having to deal with the consequences of their actions. For instance in Milgram’s experiment, the participants were placed in different rooms to the learners that they were administering the shocks to. The participants therefore did not have to see the effect of the shocks on the learners and were effectively just pressing buttons with no visibly consequence, which is debatably a reason why there were such high levels of obedience in Milgram’s study.

Gradual commitment is yet another explanation of obedience and it explains how introducing things in small stages can lead to greater obedience. For instance in Milgram’s study the shocks were administered at 15 volt intervals and started from 15 and worked their way up. By committing the participants in small stages this established a basis for obedience and as each shock only a small amount larger than the previous one it made it difficult for the participant to back out at any time. This therefore made it very difficult for his participants to obey.

Individual factors take into account that personality type plays a role in obedience. It has been speculated that some people are born with a tendency to be passive whereas some are more likely to be dominant. Adorno in 1950 developed the idea of an authoritarian personality, which describes the former type of person. He stated that those with an authoritarian personality are more likely to obey, due to their passive nature. There are weaknesses to all of the situational factors that help to explain obedience.

For example they are reductionist as they fail to take into account the role of the individual. There is evidence in research to support the importance of the individual, for instance Milgram. Each of the situational factors seem to assume people will all act in the same way, yet when looking at the results of Milgram’s research, 40 percent of the participants did not administer all the shocks, which shows that for example, gradual commitment did not apply to all the participants.

This failure to take individual differences into account is therefore quite a valid flaw to the situational explanations of obedience. There are practical applications to the explanations of obedience. For example, with the knowledge that gradual commitment can lead to obedience, the government could maximise on obedience from the population by introducing policies such as recycling in small stages and slowly building upon them as opposed to introducing everything in one go.

In addition to this understanding several explanations of obedience can help people to protect themselves against them, for instance to prevent things such as what was researched in Hofling’s experiment, where 21 out of 22 nurses were going to follow the instructions of a bogus doctor. The explanations are deterministic because ultimately we are autonomous beings and still have the freewill to choose whether to obey or not. Although these explanations might increase the chance of obedience the final decision to obey or not always lies with the person in question.

Even if it is rooted in someone’s personality to be passive, they can still choose not to obey, the decision would just be harder due to their personality type than it would be for someone without an authoritarian personality. The individualistic explanation could fall either side in the nature vs. nurture debate. Your personality could have been dictated by your genes, and therefore could be responsible for someone being the type of person to obey. Or alternatively you could be shaped and nurtured into being an authoritarian person through your parents and society.

Outline and evaluate explanations of obedience. (2020, Jun 02). Retrieved from https://studymoose.com/outline-evaluate-explanations-obedience-2266-new-essay 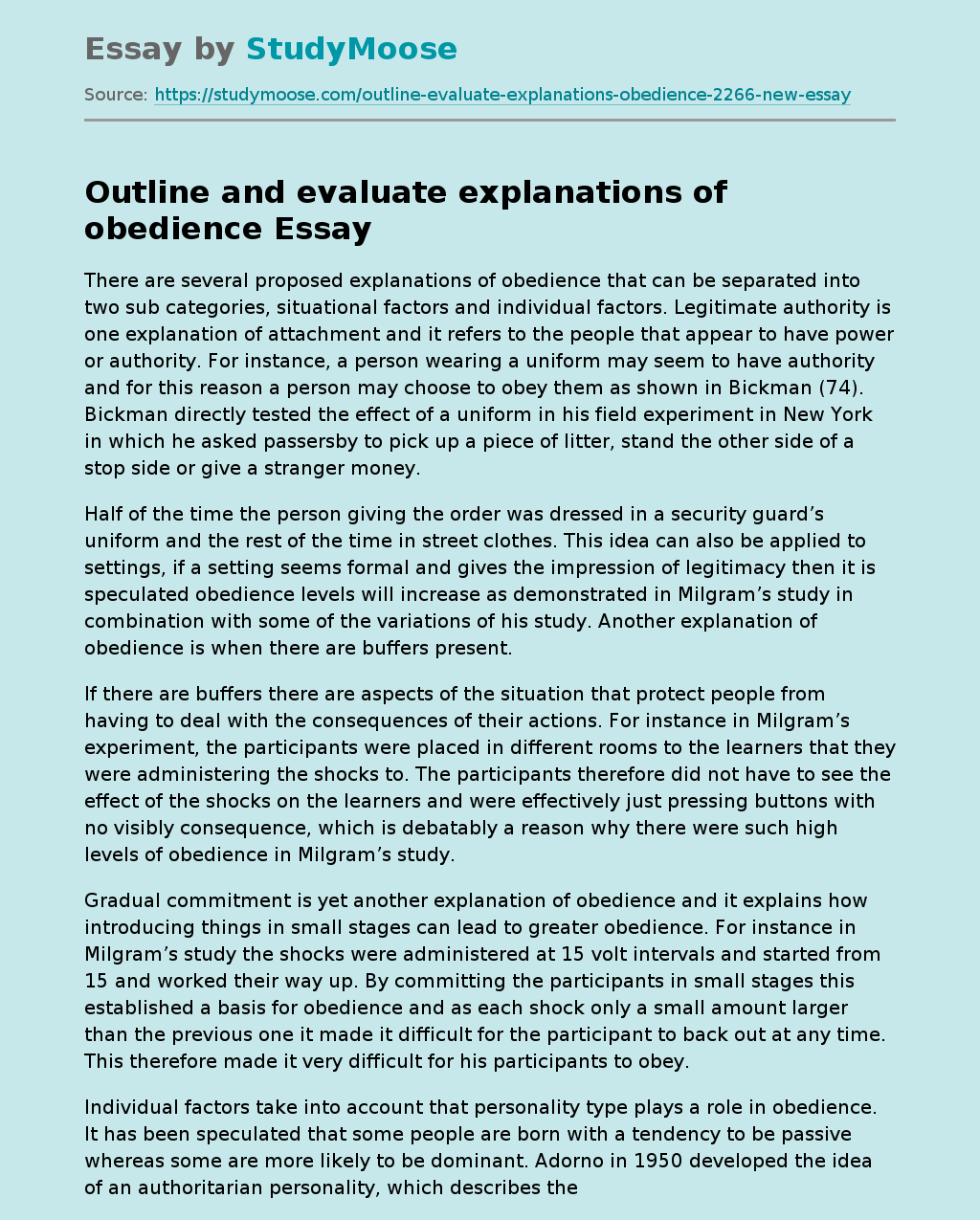