Our first impression of Othello comes from a conversation between Iago, Roderigo, and Brabantio. Our second impression of him comes from Othello himself. The first two impressions conflict greatly, the second being more accurate than the first. Despite the way Othello is described in the first scene, he shows himself to be quite different in the second.

Our first impression of Othello comes from a conversation between Iago, Roderigo, and Brabantio. Iago speaks of Othello with contempt. From the very first scene, he seems to be a hated character.

Without even mentioning Othello’s name, the three men paint a picture of him as a scheming criminal who has stolen and raped Brabantio’s daughter. In calling Othello names like “an old black ram” (1.1.97), “the devil” (1.1.100), and “a Barbary horse” (1.1.125), Iago depicts Othello as evil and dirty. Brabantio announces that he would rather that Desdemona was with Roderigo than the Moor, when he says, “O, would you had had her!” (1.1.198). From this first scene, the audience gets a very negative impression of Othello–one that differs greatly from the second impression.

In the second scene, when we actually meet Othello, we see that he is not at all like how he was portrayed in the first scene. He is an honorable and honest man. When Iago tries to warn him of Brabantio’s anger, he refuses to go into hiding, saying, “Let him do his spite. My services which I have done… shall out-tongue his complaints… I must be found. My parts, my title, and my perfect soul shall manifest me rightly” (1.

2.20-37). Othello is confident in his actions and refuses to run away like a coward, having done nothing wrong. Then, when Othello’s men meet up with Brabantio’s men, Othello’s wise words prevent a bloody conflict. He says “you shall more command with years than with your weapons…Hold your hands…Were it my cue to fight, I should have known it without a prompter” (1.2.78-104). Obviously, from Othello’s smart words and logical actions, he is not the man that Iago, Roderigo and Brabantio made him seem to be. 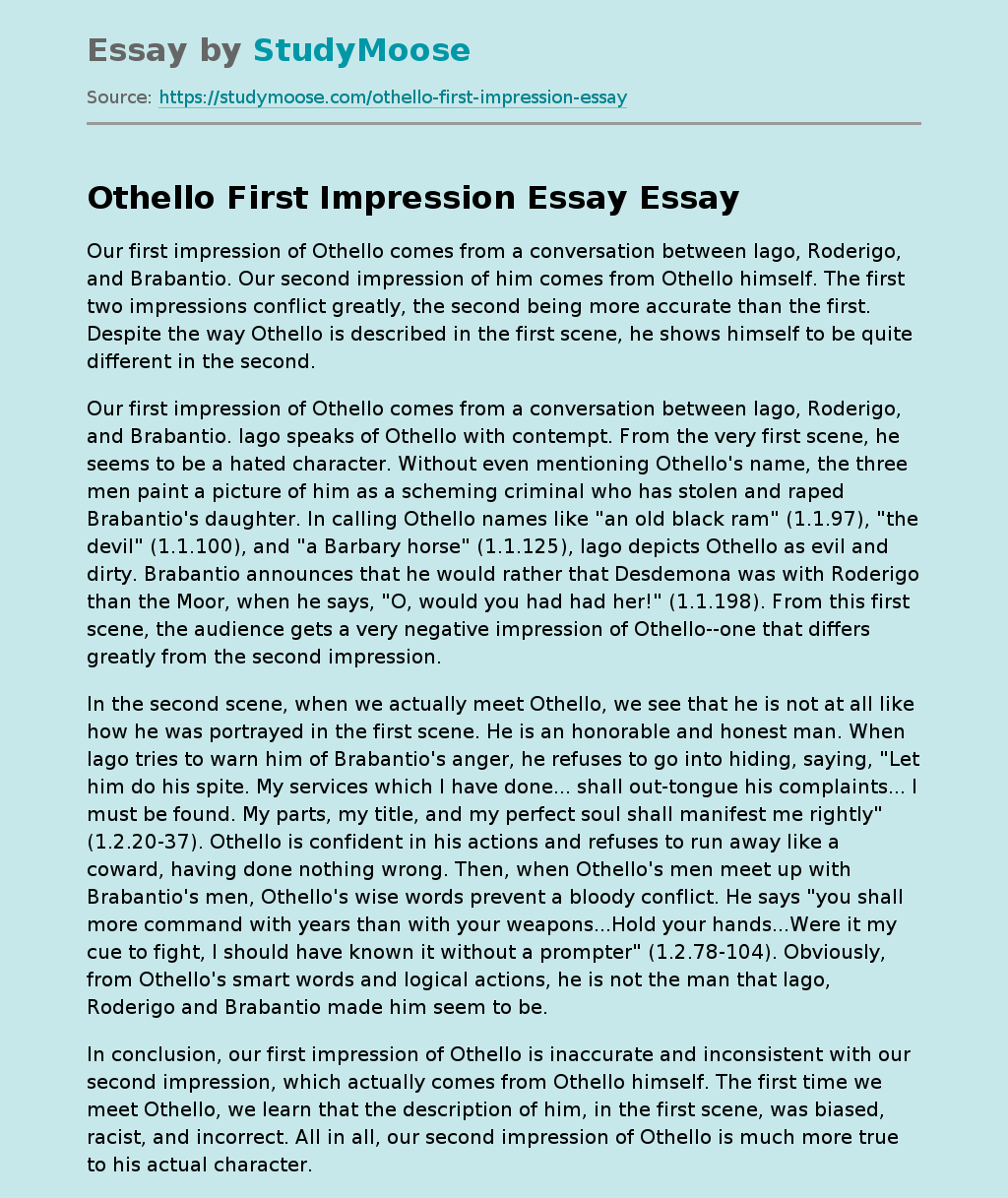