Organisation structure is the main way through which management control is achieved. Without organisation structure control could never be possible, employees would do as they please because there’s no power or authority over them. It is for this reason we have Directors, Managers, Supervisors and Workers so that the division of power is clear in the organisation and a structure is formed. An example of hierarchical control always happens at my working place in Safeway.

The store manager will pass a task to the controllers of the store this task is then passed on to the sales assistances to do, the controllers responsibility is to make sure the task is done.

Don't use plagiarized sources. Get your custom essay on
“ Organisation structure ”
Get custom paper
NEW! smart matching with writer

Existing employees can get trained up in the ever-changing way the organisation operates. I have attended a customer service course at Safeway, where Safeway were changing their customer service values. Organisations may also control individual employees through the power to set the agenda by setting policies and rules in an organisation. Written polices and rules guide employees’ actions, structure their relationships and try to establish consistency. Rules establish acceptable behaviour levels of performance and attempt to lay down standards.

Budgets maybe also used to control an individual; they can be given targets to guide their performance. An exact example happens to me at work in Safeway, take for example the wastage as a percentage of sales target for the week is under 1. 8% anything more than this is not really expectable. Control through the power to exclude or in everyday terms could be known as punishment can has good or bad effects on an organisation and is very unpredictable. Organisations will not know how the individual will react as not every individual is the same.

Control through the power to exclude could mean the withdrawal of rewards, pay deduction, suspension, dismissal, prison; it all depends on the type of organisation. This is normally implied when an individual performs defiance to management directions. Personal centralised control consists of centralised decision taking, direct supervision, personal leadership: founded upon ownership or charisma, or technical expertise and the reward and punishment reinforce conformity to personal authority.

Bureaucratic control includes the breaking down of tasks into easily definable elements. Formally specified methods, procedures and rules applied to the conduct of tasks. Budgetary and standard cost-variance accounting controls. Technology designed to limit variation in conduct of tasks, with respect to pace, sequence and possibly physical methods. Routine decision taking delegated within prescribed limits and the reward and punishment systems reinforce conformity to procedures and rules. Output Control has job and units designed to be responsible for complete outputs.

Specification of output standards and targets, use of ‘responsibility accounting’ systems, delegation of decisions on operational matters: semi-autonomy. Reward and punishment is linked to attainment of output targets. Cultural control includes the development of strong identification with management goals, semi-autonomous working: few formal controls. It also includes strong emphasis on selection, training and development of personnel and the rewards are oriented towards security of tenure and career progression.

The first difference between these four management strategies are that they comply with different types of organisations. Each strategy has a specific organisation it is familiar with. Take for example personal centralised control is often found in small owner managed organisations like a sole trader. Output control is normally found in manufacturing organisations. Another difference is that the rewards and punishment of each control strategy take on a different objective.

Take for example an organisation with a bureaucratic control strategy believes that reward and punishment systems reinforce conformity to procedures and rules. An organisation with a output control strategy believes reward and punishment is liked to attainment of output targets. Output control and cultural control have some aspects of autonomy, individuals are give some independence when working. Once objectives are set management delegate tasks out to workers and a form of trust is given to them.

This is what separates this strategy with the others, all the others work on a larger scale bases, bigger workforce, capital intensive, organisations where delegation is essential. There are a number of theories of power and control that give organisations ideas in ways which they can control individual employees. The first theory I will look at is Luke’s three dimensional model, which is the model that of Steven Luke’s (1974). He believes that there are three major perspectives or better known as ‘faces of power’ that bring us to the real roots of social power.

The first being that ‘A has power over B to the extent that he can get B to do something that B would otherwise not do,’ which was earlier stressed by Dahl (1954). The second face of power was that A has the power to exclude B from entering the decision making process. And the third being that A has power in that their definition of the situation is accepted by B. Luke’s three dimensional model is therefore essentially structural. The second theory of power and control comes from Foucault and Disciplinary Power, which is the theory that of French social scientist Michel Foucault.

He believed that the problem with structural approaches is that they fail to distinguish the realities of power, and have yet to catch up with the changed nature of power in post-modern society. Foucault looks back before and up to the eighteenth century of punishment of crime, the times where criminals were tortured in public. He then goes on to state that by the nineteenth century physical punishment disappeared and was replaced by imprisonment and believed this was the beginning of the disciplinary age. 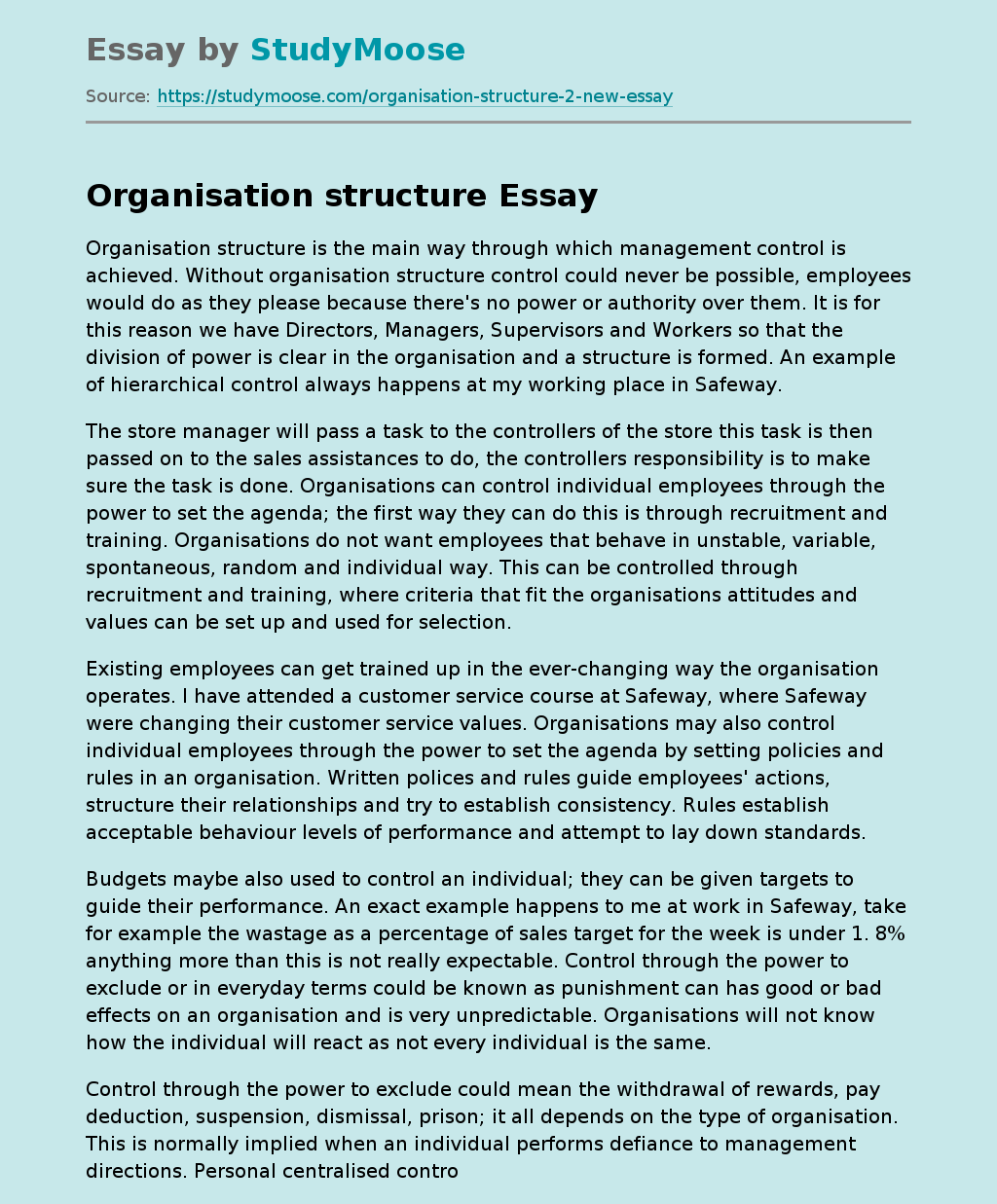