In both poems “Oranges” and “Fair Trade” by Gary Soto, the author explores the recurring theme of compassion and pride. Both poems have several ways to show the theme. The poem “Oranges” is about young love and knowing how it once felt. At the beginning of the poem, I get the sense that the boy is a little apprehensive in meeting his girl as he states, “Cold and weighted down / with two oranges in my jacket. ”

Certainly two oranges aren’t going to weigh anyone down, therefore the image described must be the nervousness along with the anticipation of seeing meeting her.

Don't use plagiarized sources. Get your custom essay on
“ Oranges and Fair Trade ”
Get custom paper
NEW! smart matching with writer

As I walked toward / her house, the one whose / porch light burned yellow / night and day, in any weather,” tells me about his burning passion for her. “She came out pulling / at her gloves, face bright / with rouge,” tells me that she is also excited to see him and that she is either blushing or has applied some makeup in the manner a young inexperienced woman would.

As she comes out of her house, some of that nervousness exits him because he smiles and even has the courage to touch her shoulder.

The line about the “used car lot” and “newly planted trees” is imagery about his reality and what kind of life he lives. As they enter into the drugstore and look at the candies, the boy is probably feeling for the first time a sense of maturity as he asks her what she wanted; because he’s able to buy her something.

“The lady’s eyes met mine, / and held them, knowing / very well what it was all / about. ” The imagery here provides some tension for the reader: “Will the boy ask the girl to change her selection? Will the saleslady demand cash or no sale? Although his courage is impressive, the risk was also a safe and intelligent bet: If the saleslady had refused to honor his orange for payment, he would still have the two oranges to share with the girl on their way home.

The oranges give the narrator “weight” and importance, and then they became a medium of exchange used to buy the candy. “I took my girl’s hand / in mine for two blocks,” The boy’s reference to the girl as “my girl,” shows that he now feels in control. The boy proves himself and impresses the girl, which was the goal in the first place, and he is rewarded for his bravery by being allowed to hold her hand on the walk home.

As the narrator describes “I peeled my orange / that was so bright against / the gray of December / that, from some distance, / someone might have thought / I was making a fire in my hands,” symbolizes the new energy of confidence he has in himself, as well as his increased affection for his girl. As a result, the imagery in this poem reflects the boy’s struggle in life from adolescence to adulthood.

The poem “Fair Trade” is about money, pride, and sympathy. The title gave off an aura of sarcasm as he states, “she said, “Dollar thirty,” / I thought, No meat or butter. It wasn’t really a fair trade, because a dollar thirty for two slices of bread is quite expensive at his time. Neither did the waitress offered meat nor butter. “The man / hesitated, then fumbled for / coins from his pocket,” tells me that the man is poor, because he wouldn’t have been taken aback if he have lots of cash. Only the narrator sympathize the Mexican man as he states, “I stabbed the carrots, / hurting for this man. ” I conclude that the bread may not have satisfied the man because he didn’t leave anything on his plate.

At the end of the poem, the narrator tells us that the experience had left him a mark, that he wouldn’t forget the memory of that day. The images of the poem reflect the Mexican man’s pride and the narrator’s compassion towards him. Both poems teach us the same lesson; “Compassion comes from seeing others struggle. ” The poems’ similarities are that they both have people who show sympathetic pity and concern to others. In the poem “Oranges,” the narrator describes compassion by his own experience, how pride affected him. On the other hand, the poem “Fair Trade,” describes the narrator’s interpretation of pride. 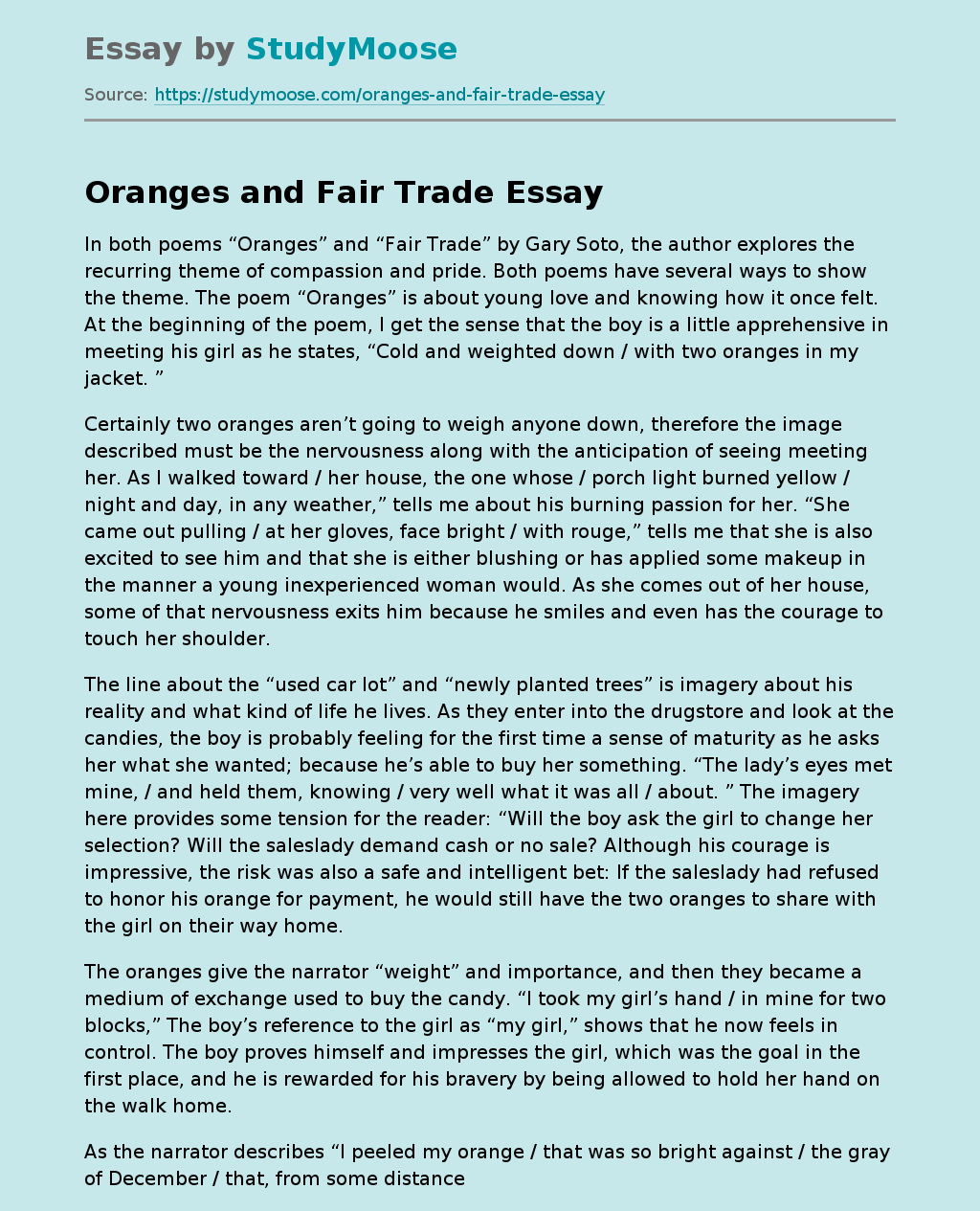