“Operation Gomorrah” Ingram recalls her childhood experiences of war within her home city of Hamburg, Germany. The writing techniques and detailed descriptions within the autobiographical narrative reflect Ingram’s sensitive nature and the emotional link she has to her childhood because of this traumatic event.

“I was eight years old and a respectful, obedient child. But one day in late July my mother asked me to do something and I disobeyed her, and I shall be forever glad that I did.

Turn in your highest-quality paper
Get a qualified writer to help you with
“ Operation Gomorrah ”
Get high-quality paper
NEW! AI matching with writers

”(Marione Ingram 123) Usually a boy who is only 8 years old should be naughty and mischievous. However, at the beginning of the story, the author tells us that he was thought to be a respectful, obedient child by others. The plot that Ingram does not want to sent his baby sister Renate to his cousin’s apartment (123) indicate that Ingram has his own thoughts, has his likes and dislikes. But he is so sensitive that he cares too much about what others think.

He loves his mother, he does not willing to let her down. So, although he does not want to go outside from within, he tried (123). We can imagine that how much joy and pleasure of childhood he has lost to force himself to live up to this reputation to be respectful and obedient.

This is too cruel to this little boy. But he was thrilled to be outdoors (123). At that moment, there must have been an intense internal conflict in his heart. On the one hand, he does not willing to destroy his reputation to be obedient as well as let his mother down, but on the other hand, he cannot manage to overcome his internal fears.

After a struggle, he turned back and then began to hurry to home (123). When he thought back to the whole story, he found that if he had followed his mother’s direction to carry his baby sister to his cousin’s apartment and he himself stayed there, he would not have experienced the great disaster: the Operation Gomorrah. For the obedient child, he regrets for his whole life for that only one resist. His sensitive makes him a person who always thinks too much. That he always considers the feelings of others, regrets the past and be worried about the future makes him a shilly-shally and inner-turmoiled person.

Ingram states “I pulled mother away from the stove, tugging first one limp arm and then the other. I managed to get her head and a shoulder into the dining room…” (124) “I was sitting on the floor with her head in my lap, trying to think what to do, when coming from the bottom of the stairwell where I’d left the pram I could hear the faint sounds of my baby sister’s whimpering…” (124) “There were no air raids to disturb us, though I woke up often to see if she was still unconscious… ” (125). When his mother was ill, the 8-year-old lithe boy took the responsibility of taking care of his mother and his baby sister. His behavior described in this part gave me the feeling of unreal. He took care of his mother and baby sister so carefully that he can even hear the faint sounds of his baby sister’s whimpering from the bottom of the stairwell. He was worried about his mother and baby sister and tomorrow’s life, so he woke up often during that night. It is totally not like a little boy’s behavior. All of these plots indicate that Ingram has subtle nerves. He is sensitive to environment.

“I looked at mother and I understood” (Marione Ingram 125). What did this little boy understand from two adults’ conversation? At first reading I do not understand what he got. But then I understood that Inge was reluctant to help them during that desperate situation. From Inge’s talk, emotion and action, he and his mother understood the key point. He is so smart and sensitive to things. His sensitivity inspires his thinking. He is good at observation and analysis. I have to admire the little boy’s understanding. But the little boy did not show any unhappiness or lose his temper about his cousin’s attitude. He was so quiet just keep his thought in his mind.

As for the disaster, Marion Ingram used abundant detail description to show the chaos scene. He describes his former playmate like this “She was holding her favorite doll, holding it tight and turning slightly away as if she feared I might try to snatch it from her…” (127). The description showed a girl’s behavior in desperate situation vividly. There are also many environmental descriptions during the bombing. “A false dawn lit the southeastern sky, rouging mother’s cheeks and painting the walls of buildings on our side of the street a lurid red…” (128). At one point between life and death, Ingram still have one part of his heart concerning his mothers’ emotion and remember forever. When he was in his mother’s arm, he was observing how other people trying to survive. “Then a woman carrying an infant came running down the street along the same route we had taken.

In conclusion, Marione Ingram concludes abundant detail descriptions in this essay that even gave readers the feeling that this story is not his own story. In this way, the author shaped a sensitive character from different point of view. And because of his sensitive nature, he is also a shilly-shally person who always suffers intense inner struggle, he is a good thinker and observer which made him a good writer, he is a very kind person who would consider for others at every minutes. 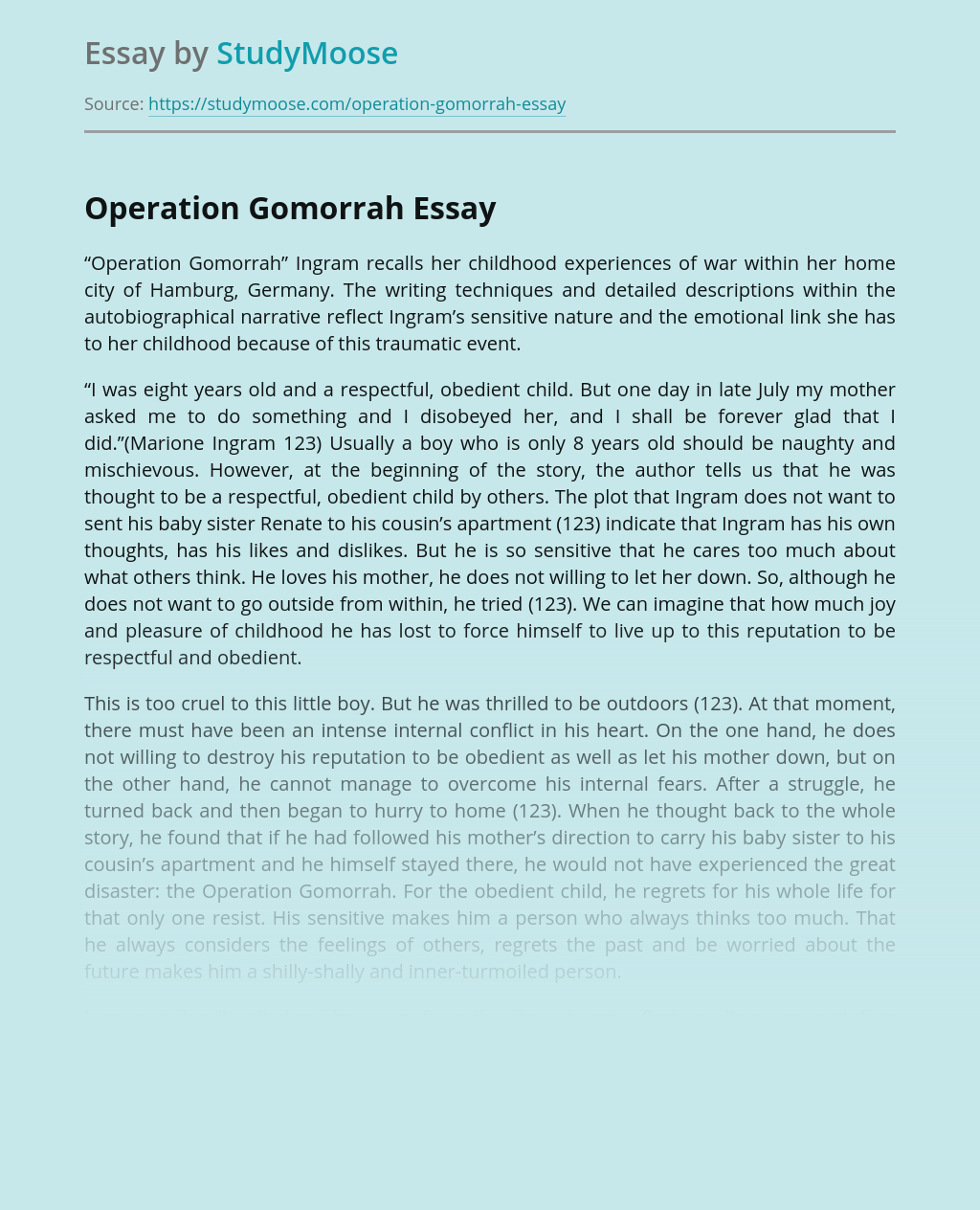 Turn in your highest-quality paper
Get a qualified writer to help you with
“ Operation Gomorrah ”
Get high-quality paper
Helping students since 2015
Stay Safe, Stay Original