One Hundred Years of Solitude by Gabriel Garcia Marquez

She unflinchingly goes on after the deterioration and death of her husband. She displays profound amounts of fortitude and perseverance. Ursula alone permitted the longevity of the Buendia family. Ursula prevented chaos by taking charge when needed most. Before the decline of her husband, Ursula did not appear as the superwomen that she eventually became. Marquez had the reader believe that she was merely the wife of Jose Arcadio Buendia. But Ursula first shines when her husband was distraught with curiosity, leaving Macondo when she powerfully scolded him, “If I have to die for [you] to stay here, I will die”.

Don't use plagiarized sources. Get your custom essay on
“ One Hundred Years of Solitude by Gabriel Garcia Marquez ”
Get custom paper
NEW! smart matching with writer

In light of Jose Arcadio Buendia’s strange antics, Ursula was still more than capable of achieving great things. Ursula was the one who was able to find the route out of Macondo, which her husband hadn’t been able to discover.

She was also capable of setting up a successful candy business while her husband was not providing for the family. In addition she was also able to raise her children in conjunction with creating her own new frontiers. This showed that she could effectively function as both the mother and the patriarch of the family, while performing incredibly in both roles concurrently.

Her ability to juggle parenting, financing, and her pursuit of her own goals is dumbfounding. Ursula is truly the quintessential ‘strong woman’. The true capacity of Ursula’s strength was revealed during the reign of Arcadio after the departure of Aureliano.

Arcadio presents himself with great power and tyranny through enrolling school children in his army or subjecting the entire town of Macondo to his oppressive whims. Because of this domineering rule, the citizens were put in fear and weakened. When Arcadio was preparing the execution of Don Mascote, Ursula domineeringly “let go with the first blow the lash”, causing Arcadio to run back home with his tail between his legs. Ursula treated him like a child, causing him to behave like one. Through her intelligence and strength she demeaned the arrogant and powerful leader into nothing more than a scared boy.

The Buendia household did not last long after the deterioration of Ursula. Her great power over the household was passed from her to Fernanda. Unfortunately, Fernanda did not comprehend the responsibility required to manage the family, nor did she have the knowledge or know-how to keep the Buendias afloat. The best example of the family’s dependence on her is “as long as Ursula had full use of her faculties some of the old customs survived and the life of the family kept some quality of her impulsiveness… no one but she determined the destiny of the family. (228) Due the the lack of the strong support in the Buendia family, the hole left by Ursula’s death caused the decline of the family and eventually all of Macondo. Ursula is an exemplary character, and excels under crisis and stress. She had the fortitude to tell her husband what was on her mind, the balance to support her family emotionally and financially while pursuing her own goals, and the courage to stand up to a tyrannical dictator. Ursula is easily the sanest and strongest character in the novel, and demonstrates this constantly.

She provides stability to her family and all of Macondo. She demonstrates her logic when she notices trends in her family or the history of Macondo “at first they behave very well, they’re obedient and prompt and they don’t seem capable of killing a fly, but as soon as their beards appear they go to ruin.”; or when she noted the repeat of events in Macondo, “it’s as if time had turned around and we were back at the beginning.”. She provides stability and reason to her family and all of Macondo.

One Hundred Years of Solitude by Gabriel Garcia Marquez. (2018, Nov 15). Retrieved from https://studymoose.com/one-hundred-years-of-solitude-by-gabriel-garcia-marquez-essay 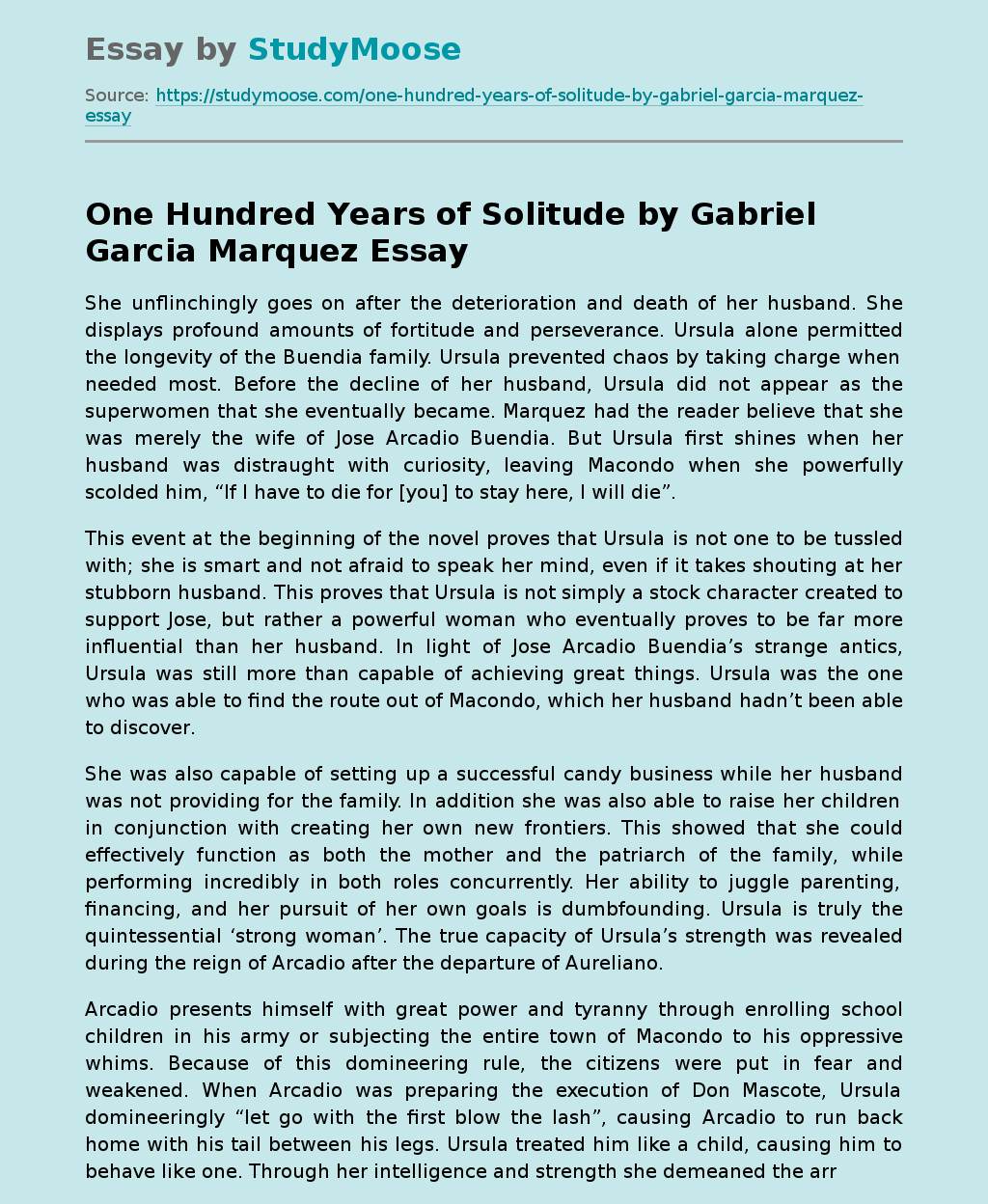