On the Symbolism of The Scarlet Letter

Nathaniel Hawthorne is a great romantic novelist in America in the 19th century. His novel, The Scarlet Letter, is considered as the first American psychological novel written by Nathaniel Hawthorne. It reveals the psychological insight with which Hawthorne proved guilt and anxiety in the human soul. The Scarlet Letter is deeply concerned with ethical problems of sin, punishment, and atonement. The background of the story is set in Salem, Massachusetts, a strictly controlled Puritan town with harsh laws and fierce prejudices.

Don't use plagiarized sources. Get your custom essay on
“ On the Symbolism of The Scarlet Letter ”
Get custom paper
NEW! smart matching with writer

Hester Prynne, a young wife whose husband is presumed dead, is being publicly humiliated for the sin of adultery. The proof of her sin is her baby girl Pearl. She conceals the identity of Pearl’s father to protect him from the harsh judgment of Puritan law.

She however is doomed to spend the rest of her life marked as an adulterer by wearing a scarlet “A” on her chest. Hester’s husband meanwhile has arrived in the colony and taken up practice as a doctor.

He makes Hester promise that she will not reveal his identity to anyone. It is the Reverend Arthur Dimmesdale, who is renowned as an especially holy and pious man. Wracked by guilt he starts to show outward signs of serious illness. Hester’s husband under the assumed name Roger Chillingworth moves in begins taking care of Dimmesdale. Chillingworth soon discovers that he is Pearl’s father. For revenge, Chillingworth uses his influence to multiply the feelings of guilt in the minister as a form of emotional torture.

At the climax of the story, Dimmesdale confesses his sin and dies.

Hester and Pearl leave the colony. Chillingworth’s gets the purpose of revenge but suddenly finds his life meaningless and dies within a year. Hawthorne is outstanding in literary skills, especially in symbolism. In this novel, symbolism runs through the whole novel where the scarlet letter “A”, the characters of story and the settings are all endowed with a deep symbolic significance. The main symbolism of the novel is represented by the colors, the scarlet letter “A”, the four main characters and the settings. The wide use of symbolism makes his characters to be recalled embodiment of psychological traits or moral concepts. Few literature works equals The Scarlet Letter in intensity and effective use of images and symbols.

In Liu Huijuan’s paper On the Symbolic Meaning in Hawthorne’s Works The Scarlet letter, the author studies that the heroine’s name Hester Prynne contains the meaning of beauty, passion, amour, admiration and aspiraion. While the hero, Arthur Dimmesdale, whose initials AD, which also stands for adultery .The name of Hester’s husband Roger Chillingworth means agony, anguish and avenger. Hester and Arthur’s daughter’s name Pearl contains the meaning of precious, glorious and good virtue. The symbolism of the settings: In the novel, settings are one of major elements of symbolism, such as the scaffold, which is the dominating point at the beginning, in the middle, and at the end of the story.

Symbolism: A symbol is something concrete that represents or suggests another thing that can’t be pictured in itself. The use of description of some outward object is to show some hidden meaning. Symbols are always in relationship, context and association, with which authors can change a wide variety of ideas into single, simple acts of understanding. In The Scarlet Letter, symbolism runs through the whole novel. Hawthorne’s emphasis on symbolism often makes the characters shadowy but with implied meaning to chew. The main symbolism of the novel is represented by the colors, the scarlet letter “A”, the four main characters, the settings and the places.

Nathaniel Hawthorne is a great romantic novelist in America in the 19th century. His novel, The Scarlet Letter, is considered as the first American novel with symbolic meaning from the very beginning to the end. In The Scarlet Letter, the symbolic meaning can be divided into the following several aspects: The symbolism of the colors: It is commonly agreed that colors are used extensively as symbols in The Scarlet Letter. The most frequently employed color symbol by the author is red. Red represents Hester’s sin, as shown by the letter “A”. The use of the red color expresses how differently Hester and Pearl are viewed by the people of Puritan Society, who are shameful for Hester’s adultery. Besides, the red color, along with images of bright glow, shows Pearl to be the product of a moment of passion between Hester and Dimmesdale.

As a red symbol of Hester’s sin, Pearl is often identified with the color red. The symbolic meaning of the letter “A”: the letter “A” has many symbolic meanings in this paper. When it comes to the Christianity, “A” stands for forbidden apple stolen by Adam and Eve; “A” for the act of the Apostles; “A” for Arrogance. For Hester, “A” stands for alone, alienation, able, angel, aspiration and admiration. For Roger Chillingworth, “A” stands for amazon, adamant and avenger. The symbolism of the four characters: Hawthorne used the four characters as symbols in The Scarlet Letter. The four symbolize different aspects of sin.

On the Symbolism of The Scarlet Letter. (2016, Aug 19). Retrieved from https://studymoose.com/on-the-symbolism-of-the-scarlet-letter-essay 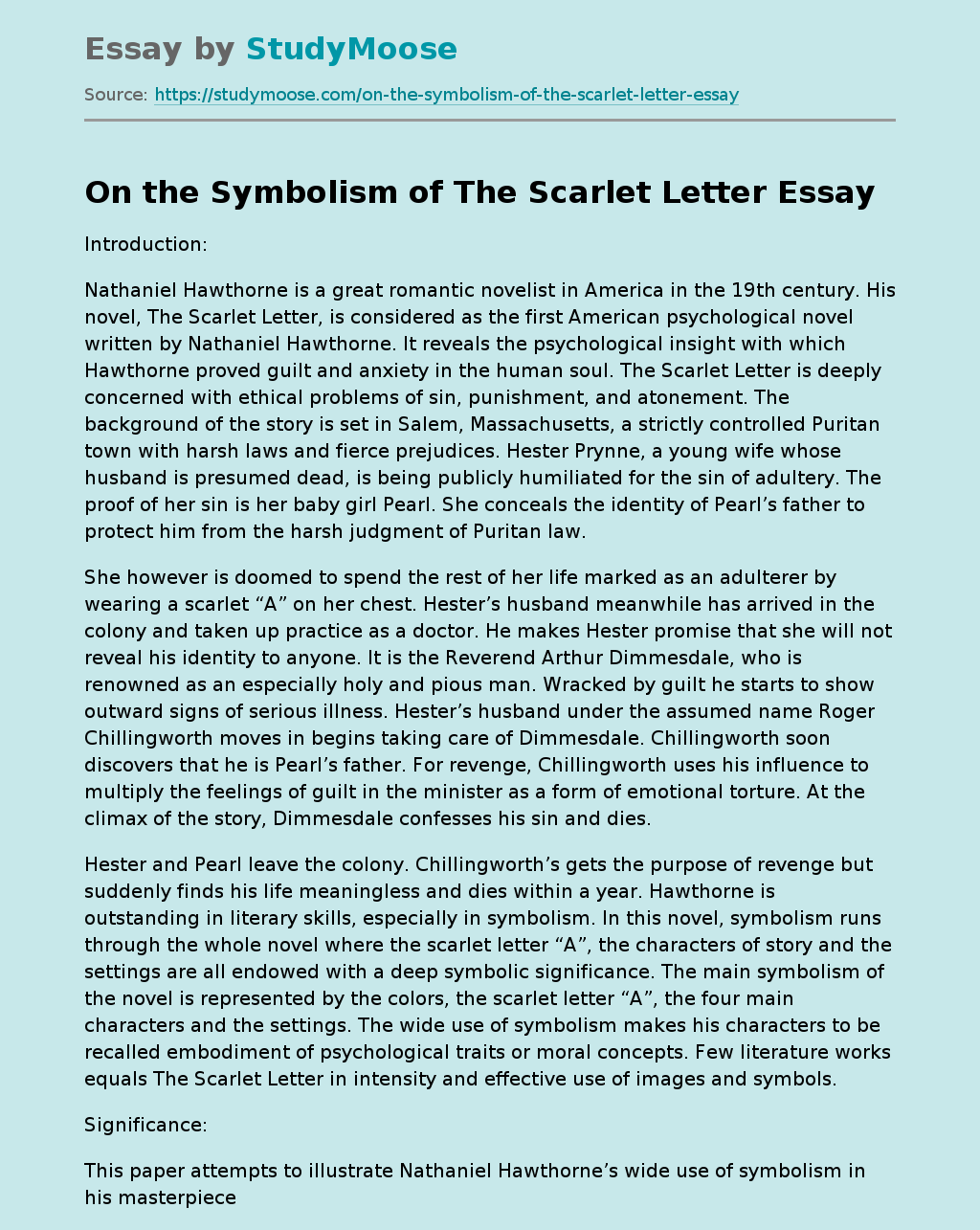