“On the Sidewalk Bleeding” by Evan Hunter

In the short story “On the Sidewalk Bleeding” by Evan Hunter, we learn that the main character of the story, Andy, is struggling to remove his jacket while he lay in an alley bleeding. We also learned that it was very painful for Andy to move, let alone take off the silk jacket, but he did so anyway. The jacket he wore symbolized his belonging to a city gang called The Royals. Andy wanted to remove his jacket in his last moments because he did not want people to think of him as being just another member of The Royals; he wanted to be remembered as Andy.

Don't use plagiarized sources. Get your custom essay on
“ “On the Sidewalk Bleeding” by Evan Hunter ”
Get custom paper
NEW! smart matching with writer

Andy did not want to be portrayed as simply another young teenager who was caught up in city gang violence, but as himself; and so he tried to remove it. Andy knew that if he died, he would no longer be a Royal, but just simply Andy.

While lying in the alleyway, Andy realized that the only reason a member of The Guardians, their opposing gang, stabbed him was because of his purple silk jacket that had the words “The Royals” stitched to the back of it.

Proficient in: On The Sidewalk Bleeding

The words of his attacker continuously repeated in his mind; “That’s for you Royal!” Andy knew that the knife that cut through him did not hate Andy, but hated the jacket. Andy realized that the title of being a Royal was no longer as important to him as it once was.

The jacket he had once worn with pride had meant nothing to him, and was the cause of the stabbing that occurred.

Andy wondered why he thought the fights, the jumps and the purple jacket were once so important to him. While he was dying, he finally realized that being a Royal was not worth it because he had just wasted his time. Andy suddenly felt as though he had never done anything, seen anything or been anywhere. Although it was painful for Andy to remove the jacket, he did so in his last moments because he had realized how stupid being part of a gang was. Andy struggled to remove his jacket from his backside because he no longer wanted to be part of gang violence. Andy did not want to be a Royal.

“On the Sidewalk Bleeding” by Evan Hunter. (2017, Jan 10). Retrieved from https://studymoose.com/on-the-sidewalk-bleeding-by-evan-hunter-essay 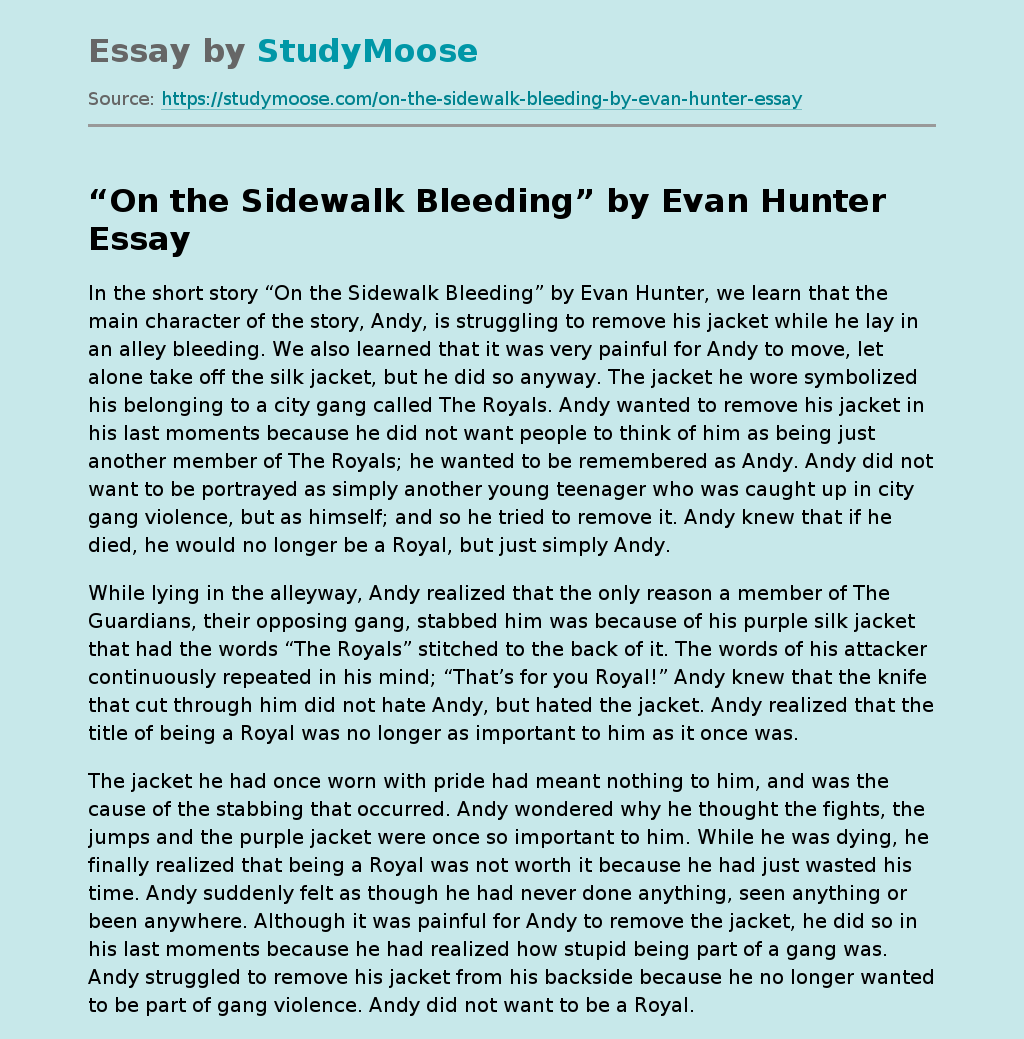