Obsessive Compulsive Disorder, or OCD, is a mental illness and behavioral disorder. Throw this paper I’ll be summarising my research on the causes, symptoms and cures of the same. Looking into the history of disease, I found that it was treatment-resistant until mid-1960s and only in the 1990s, there was a significant hike in the number of patients suffering from OCD.

Obsessive-Compulsive Disorder is an anxiety disorder in which a person feels the urge to perform certain tasks repeatedly.

The unwanted thoughts, ideas or sensations are referred as obsessions and repeated routines are as compulsions. For instance, obsessions might involve a fear of contamination or making a mistake. Many people have repeated behaviors but those may not affect them on a regular basis but make their tasks easier. But for people with OCD, these thoughts are continuous and rigid and ignoring them affects them in a great way causing distress.

Urges that recur and persist, despite trying hard to ignore or confront them are called Obsessions (wikipedia).

People suffering from OCD are subjected to aggressive thought process and unnecessary worries.Further they get engaged in particular activities in order to satiate the anxiety and suppress such fears. These obsessions result in adverse emotions like fear, doubt, disgust and make the person disturbed and uncomfortable.

Compulsion is a very strong desire to do something. Sometimes people with OCD pertain to certain behavior because they feel they have to and can’t resist it or sometimes they do so in order to get rid of the anxiety and fear.

Not every repetitive ritual is a compulsion.

OCD has been a common disease lately. Around 2.3% of people are affected by it at some point in their lives. Both men and women have been equally affected according to the studies. The unusual symptoms arise around the age of 35 while the disorder starts surfacing the person at an age as early as 20. Further studies proved that these signs tend to develop faster in children than adults. Although no specific symptoms have been identified, both environmental and genetic factors facilitate the degree of OCD. Furthermore, child abuse history and taking high stress have also been some of the prima facie reasons for the same.

As already said, people having OCD know about their excessive nature of obsessions but are unable to control the compulsions.

According to studies, some common obsessions are –

Some common compulsions are –

These “symptoms” or “signs” have been commonly observed in people suffering from OCD. However, studies still need to confirm the exact factors about the disorder in order to design better treatments.

Risk Factors and Causes for OCD

Compulsions and obsessions can take significant time of one’s routine. Avoiding it can lead to severe consequences as it will only lead to increasing fears. Studies have shown that most of the people who have OCD are afraid/embarrassed about it and tend to hide it, which in turn leads to distress and depression. Compulsions are mere actions that are learned over time and become repetitive once subjected to relief of anxiety. After multiple researches, certain risk factors can be accountable for OCD and hence one needs to be cautious about them. Some of the observed factors are listed below.

According to American Psychiatric Association, the diagnostic criteria for OCD :

OCD is a curable disorder and the treatment depends on how much it is affecting the concerned. 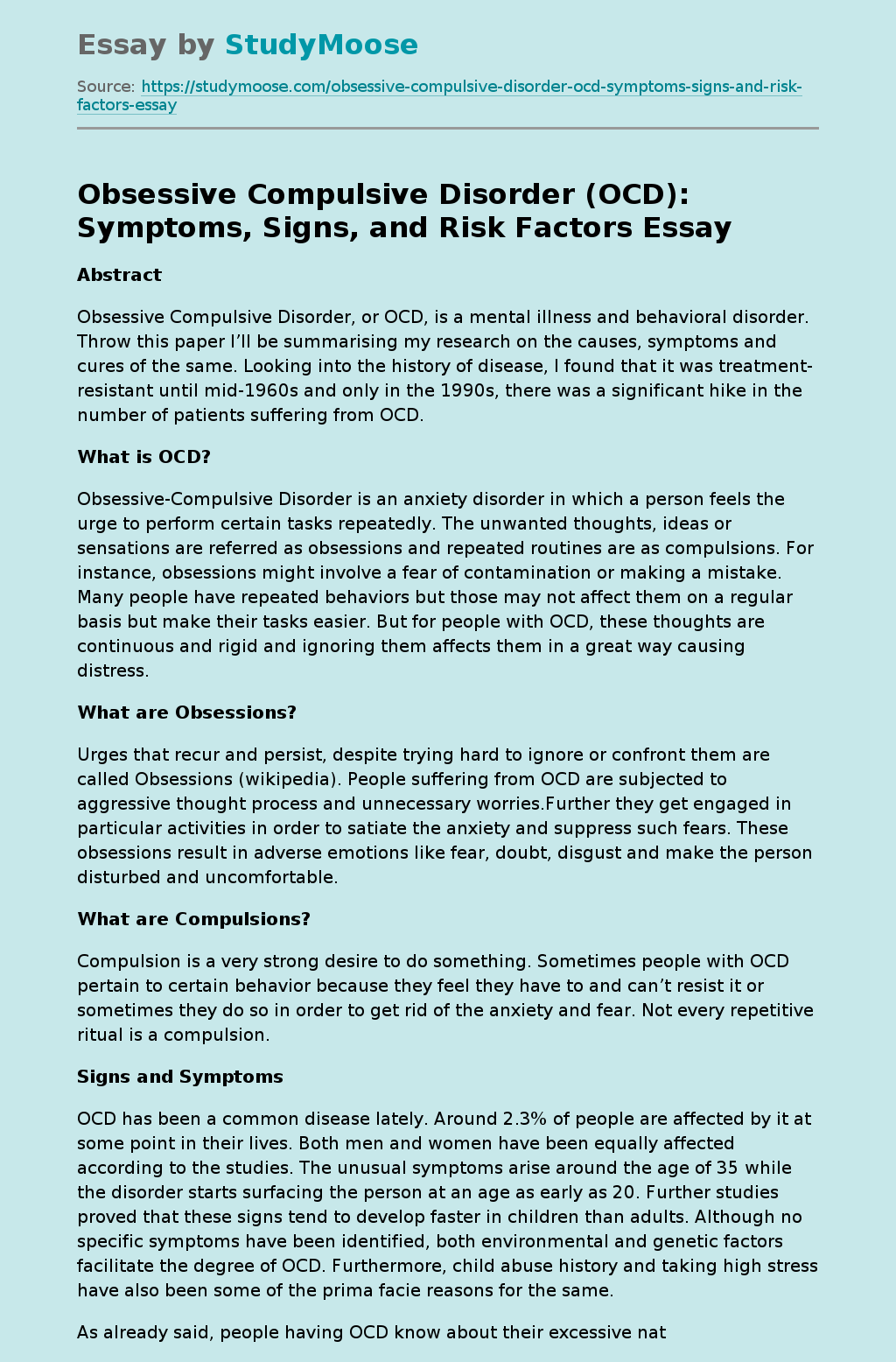