Obsessive Compulsive Disorder (OCD) is defined as the occurrence of both obsessive thoughts and compulsive behaviors preformed in an attempt to neutralize such thoughts Obsessions are defined as persistent and recurrent intrusive thoughts, images, or impulses that a person experiences as disturbing and inappropriate but has difficulty suppressing. An example of this is a person thinking that they left the stove on in their home.

Compulsions are overt repetitive behaviors or more covert mental acts that a person feels driven to perform in response to an obsession.

An example of this would be a person going back into their home multiple times to verify that they had turned the stove off. OCD has a large impact on a person’s life. It can cause severe impacts in their functional abilities, leading to a decreased quality of life (Hooley, Butcher, Nock, & Mineka, 2017).

In children and adolescents, the prevalence of OCD ranges from .25% to 4% (Krebs & Heyman, 2015). OCD becomes a chronic illness in about 40% of the individuals with this diagnosis.

Approximately 70% of these cases are comorbid with another illness. In 20% of OCD cases, the initial diagnosis begins around age 10. In children, it is more common for males to receive a diagnosis than females, with a ratio of 3:2 (Walitza, Melfsen, Zellmann, Wewetzer, & Warnke, 2011). OCD affects approximately 1.2% of adult in the United States. Internationally, the prevalence ranges between 1.1% to 1.8% (Occurrence of OCD, 2019).

According to the Diagnostic Statistical Manual (DSM), there are four areas that an individual has to meet in order to obtain a diagnosis of OCD. The first is the presence of obsessions, compulsions, or both. Obsessions referring to recurrent or persistent needs that are a distraction leading to anxiety or distress. Compulsions referring to repetitive behaviors or mental acts that are deemed as necessary for the individual to complete to prevent anxiety or distress. The second identifies these symptoms as time consuming, meaning they use 1 hour or more per day. They can also negatively impacts an individual’s social, occupational, and/or any other significant area of functioning (example: ability to learn). The third requires the obsessive and compulsive urges not be related to the effects of substance usage or another medical condition. The fourth criterion is determining that the symptoms are not better attributed to another mental disorder.

Although all diagnoses of OCD are unique, there tends to be certain themes that are common among them such as cleaning, symmetry, forbidden or taboo thoughts, or harm and sometimes hoarding. Along with these themes that are experienced, individual’s feel intense affective responses that are triggered with dealing with certain situations. These feelings can be anxiety, disgust, and/or unease (Obsessive-Compulsive and Related Disorders, 2014). Even with the differences in the themes or forms of OCD, there are three common components that are associated with them. They are trigger, avoidance, and reassurance. Triggers are the source of the worry that the individual is experiencing. It can be visually seen or thought. In order to prevent triggers, an individual may avoid them. Avoidance is a compulsive behavior in which the individual avoids people, places, and or things.

Following these two components, an individual will use reassurance to ensure themselves that the fear is not real. This could be checking on a person or thing that they are concerned about to give them temporary comfort (Types of OCD, 2019). In a study published in 2014, it was found that genetic factors made up for 45% to 65% of OCD diagnosis in children. This indicates that there is a higher genetic correlation in childhood diagnosis than in adult diagnosis of OCD (Krebs & Heyman, 2015). Adults are twice as likely to develop OCD if they have a first-degree relative with OCD than others that have first degree family members without OCD. For children with first degree family members with OCD, there chance of developing OCD is ten times greater than others without first degree family members with OCD (Obsessive-Compulsive and Related Disorders, 2014).

There has been evidence collected that shows there is dysregulation in the frontal corticostriatal-thalamic circuits along with a diagnosis of OCD. Lesions in this part of the brain interfere with the circuits ability to fully communicate properly with the rest of the brain. The symptoms experienced lead to the diagnosis of OCD. This is a fairly new finding, so it is important that there be more research completed in this area to further determine the reliability of this potential cause of OCD (Walitza, Melfsen, Zellmann, Wewetzer, & Warnke, 2011).

Although OCD cannot be cured, there are many different approaches that can be used to help lessen the symptoms. One of the most used therapies is cognitive-behavioral therapy (CBT). This therapy uses techniques that work to change an individual’s thoughts and behaviors. This therapy includes exposure and response prevention (ERP), which is exposing the individual to their trigger. An example of this would be showing a person who has a fear of contamination, pictures of dirty items and the next step may be exposing them to areas that they normally avoid because of the potential germs in that setting. Cognitive therapy is also used in CBT to help the individual develop skills that help them overcome their symptoms of OCD.

Both cognitive therapy and ERP can be used separately, but it just depends on the individual’s needs (Treatments for OCD, 2019). Serotonin reuptake inhibitors (SSRI) are most commonly prescribed for OCD. Some common names are Clomipramine (Anafranil), Fluoxetine (Prozac), Fluvoxamine (Luvox), Paroxetine (Paxil), and Sertraline (Zoloft). Of these medications, all can be taken in a pill form and a few of them are available in liquid forms. All of the medications can be given to children, except for Paroxetine, which is only prescribed to adults (Smith, 2018). Approximately one third of individuals with OCD do not respond to the SSRIs.

However, these individuals tend to have success with antipsychotic medications that help them manage their OCD tendencies (Hooley, Butcher, Nock, & Mineka, 2017). If an individual is experiencing absent insight, then they will need a more intense treatment approach. This could be medication and therapy for an extended period of time to help the individual gain as much independence as possible.

For an individual experiencing fair insight, they will need the less amount of treatment (Obsessive-Compulsive and Related Disorders, 2014). This is due to their ability to understand that their tendencies are only a side effects of their OCD and nothing more than that. In situations where OCD is extremely disabling, neurosurgical techniques may be used. For this to happen, an individual has to have severe OCD symptoms persistent for at least five years with no response to any medication or behavior therapy. Studies have shown that of these individuals, 35-45% experience a reduction in OCD symptoms (Hooley, Butcher, Nock, & Mineka, 2017). 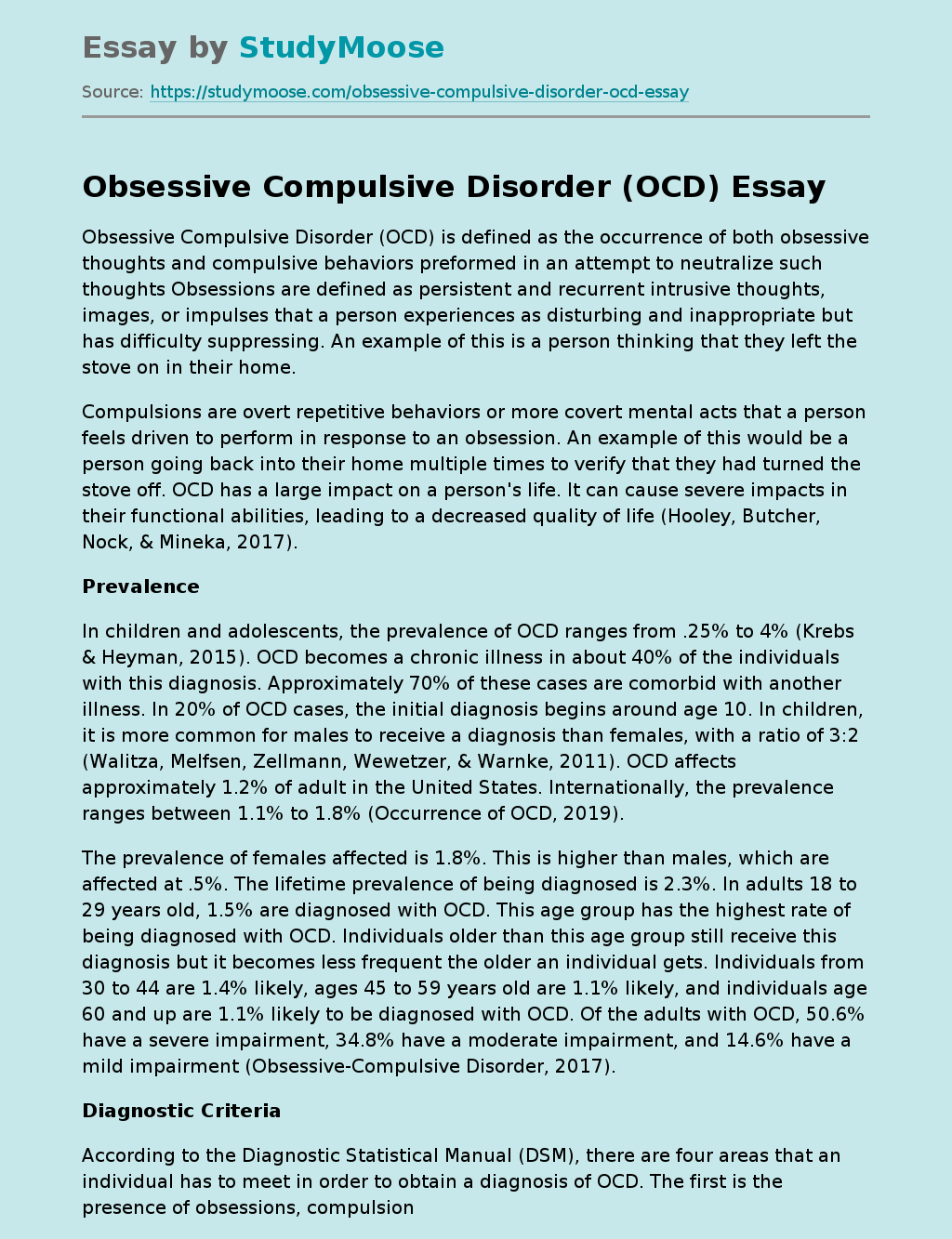