This essay will critically analyse my performance throughout the Objective structured clinical examination (OSCE) assessment I completed, including the escalation strategy utilised by the Nation early warning scores (NEWS) (RCP, 2012) as a track and trigger tool (NICE, 2007). Based on the findings from the assessment interventions will be recommended and supported by evidence and formatted on the ABCDE approach I used in the OSCE.

The ABCDE assessment is used as a tool to assess for the critically ill patients Airway, breathing, circulation, disability & elimination.

(RCUK, 2005). It is a systematic approach that can assess the severity of the critically ill patient, assess and treat life threatening conditions and have rapid intervention when needed (Grindrod, 2012). During the Assessment I introduced myself to Mrs Jones to remained respectful, non-discrimitive and ensuring the comfort and dignity of my patient, to which I pulled the curtains (NMC, 2008).

I gained verbal consent from the patient to carry out the physical assessment (NMC, 2008), although I should have gained consent at the beginning when I started talking to the patient.

This is important because the patient needs to understand the proposed assessment, according to the NMC (2008) the process of establishing consent should demonstrate a clear level of accountability. If consent is refused then the patient’s wishes should be respected although the patient needs to be fully informed of what can happen (NMC, 2008).

Standard precautions are put into place in the clinical setting to protect patients and staff which are vulnerable to infection. Alcohol based hand rubs are at the point of contact of each patient (NPSA, 2008) to help prevent hospital acquired infections and cross contamination (DOH, 2009), which I used prior to seeing Mrs Jones.

Airway The assessment of Mrs Jones airway went well I assessed for an open airway by alking to her to see if there was any vocal response, Mrs Jones responded coherently so there was a patent airway, no noises were heard which can indicate partial obstruction of the airway (RCUK, 2010). Mrs Jones was able to cough to clear secretions independently. Lack of oxygen can lead to anaerobic respiration at a cellular level which produces acidosis as lactate is produced which can lead to hypoxia (Jevon, 2011). Breathing I looked for evidence of hypoxaemia by assessing mouth and oral mucosa for central cyanosis (O’Driscoll et al, 2008), none was evident.

Respiratory rate was assessed over 1 full minute to ensure accuracy (Hunter, 2008) as deviation of 4 or more can be clinically significant (Subbe, 2006) The rate was raised at 24 which I record on the observation chart and the resperation rate falls in the orange band generating a score of 2, The acceptable normal respiration rate is 14 – 18 breaths per minute (Mallett & Doherty, 2001) indicating Mrs Jones could be compensating for metabolic alkalosis and It also contributes to the diagnosis and management of a variety of pathological conditions and helps to evaluate therapeutic interventions.

Monitoring the patient’s respiration level is one of the most accurate indicators of deterioration, which is often poorly monitored and recorded Cretikos (2008). Accessory muscles should have been observed to assess for increased work of breathing, which would result in inadequate ventilation and poor gas exchange (Esmond, 2003). Oxygen saturations are considered the fifth vital sign (BTS,2008), and these were reduced at 93 %, normal range is 94% to 98% (BTS, 2008). I record on the observation chart whichs generates a score of 2.

The drug chart was checked to see if target saturation has been identified and oxygen prescribes as per BTS (2008) guidance, and so 2L of oxygen was give via a nasal cannula to increase saturations to within target range. Mrs Jones was also sat up to increased functional residual capacity which helps to reduces the work of breathing helping to improve oxygenation (Kennedy, 2007). As per BTS (2008) guidance saturations were checked after 5 minutes and had risen to within target range.

Crackles were heard on inspiration when I listened to Mrs Jones chest, this can be an indicator for pulmonary Oedema or pneumonia (Sheppard, 2003). Circulation Mrs Jones looked unsettled and felt cool and clammy, her radial pulse was easy to palpate but was very irregular which made me instigate an ECG, manually Mrs Jones pulse was 85bpm but recorded on the ECG was 114bpm that showed evidence of atrial fibulation (AF), the patient didn’t have a history of AF. Capillary refill was just over two seconds and blood pressure was115/85, I did not calculate the pulse pressure or arterial pressure.

Her temperature was within normal range at 36. 3. I record the observations and the heart rate falls in orange band generating an additional score of 1. Mrs Jones explained that she had passed urine 5 hours ago which was 200mls. NICE (2007) state that an adult urine output should be measured at ‘>0. 5mls/kg/hr’, I knew this was low for the patient but I did not use the calculation to work out how much it was an hour, volumes of less than 0. 5ml/kg/hr can indicate cardiovascular compromise and renal impairment can occur (Dutton, 2012).

Mrs Jones has signs of ankle oedema, which made me concerned for her fluid status so a fluid chart was commenced of intake and output. Disability Mrs Jones was awake and responding to myself using the AVPU tool, The AVPU scale is a quick and easy method to assess level of consciousness which can be affected by hypoxemia and hypercapnia (Palmer et al, 2006). It is ideal in the initial rapid ABCDE assessment (Smith, 2003) although a full assessment would require using the Glasgow coma scale (NICE, 2007).

Mrs Jones blood glucose level was checked as this can rise as a result of sympathic activation, but the level is within normal range. Exposure With Mrs Jones consent I checked her invasive lines for phlebitis and her skin for any rashes, erythema or signs of pressure sores, all were normal and no phlebitis was noted. I did not assess to see if Mrs Jones had sacral Oedema, oedema only becomes apparent when the interstitial volumes has increased by 2. 5 – 3L (Porth, 2007) possible caused by heart failure. Care Escalation

I documented all the patients’ observations on a NEWS Chart which generated a score of 7, this score then gives me appropriate actions to take as there is a marked deterioration of the patient. 7 or more triggers the Action of escalating care by contacting the medical registrar looking after the patient and also consider moving the patient to a level 2 or 3 care facility. When contacting the registrar I used the Situation, background, assessment and recommendation (SBAR) briefing model to tell the medical registrar about the patient so they are fully aware of the patient and their condition and actions I want them to take.

The handover I gave to the registrar was slightly muddled and I jumped back and forth instead of remembering the systematic order that the tool was designed for there for I missed out information about Mrs Jones that could of been highly important to the doctor. Conclusion The ABCDE assessment gives health care professionals a framework which helps detect life threatening conditions and are addressed early. The patient I had during my assessment had a lot of complex issues but This approach helps remember the essential things and intervening and referring along the continuum of A to E helped reduce further determination progressing. 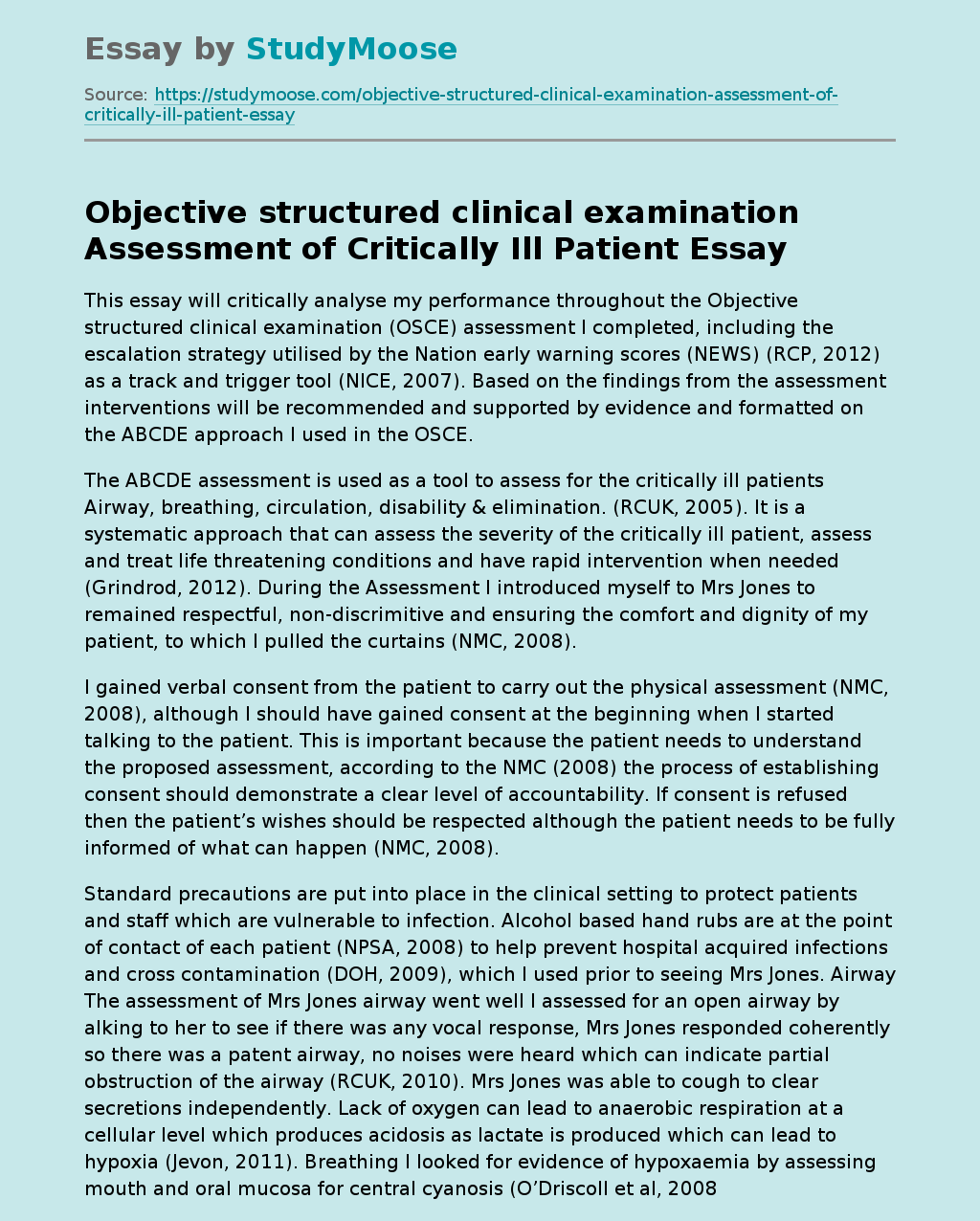