Nursing as a Profession

The question of whether the practice of nursing is considered a profession or an occupation is an ongoing debate, much like the ongoing debate over what defines a profession. Several scholars have outlined criteria for considering an occupation to be a profession. Given a list of scholars and their criteria for what characteristics define a profession, I have chosen the list formulated by Lucie Kelly, RN, PhD, FAAN. Although the scholars’ works seem to share similar criteria and any could be selected for comparison, I have chosen Kelly’s criteria based on her background in the nursing profession.

Don't use plagiarized sources. Get your custom essay on
“ Nursing as a Profession ”
Get custom paper
NEW! smart matching with writer

In addition to being a nurse, Dr. Kelly is a writer and a teacher. She compiled a list of eight characteristics of a profession in 1981 (Chitty & Black, 2011, p.

66). Though they were written over 30 years ago, Kelly’s criteria are still relevant to modern nursing practice.

According to Kelly’s first criterion, a profession should provide a service to humanity and to society as a whole (Chitty & Black, 2011, p. 66). I believe that there is no sustainable argument against the fact that this is exactly what nurses do. Nurses provide a service by caring for individuals in our society who are ill or injured, and they educate and promote wellness in their communities. I believe that the nursing establishment certainly meets and possibly defines the requirements for this particular standard.

I believe nursing also meets the second standard, which states that a profession should possess a special body of knowledge that is constantly advanced through research (Chitty & Black, 2011, p. 66). Nursing is based on science, but what sets the profession apart is the focus on the individual as a unique being and their response to health problems. Nursing is constantly being refined through evidence-based practice. “Nursing is no longer based on trial and error but increasingly relies on theory development and research as a basis for practice” (Chitty & Black, 2011, p. 66).

The third characteristic of a profession, according to Kelly, is that the service involves intellectual activities and that accountability is an important feature of those activities (Chitty & Black, 2011, p. 66). I believe nursing also meets these requirements through the nursing process. In order to provide care for an individual, a nurse must assess the problem, decide on an approach (or plan of care), and implement that plan. The nurse has to be able to evaluate the outcome of those actions and adjust the plan accordingly. Autonomy is an important part of this individual responsibility. Nurses are held accountable for their individual actions by their employers, patients, and the public.

Registered nurses today are required to meet strict educational standards before applying for licensure. Kelly’s fourth criterion requires practitioners to be educated in institutes of higher learning (Chitty & Black, 2011, p. 66). Associate or baccalaureate degrees are the most common education levels for registered nurses. Some diploma programs are still being run in hospitals, but their numbers are steadily declining (Chitty & Black, 2011, p. 149). Graduate degree programs focused on education, research, and advanced practice provide opportunities for nurses to progress in their careers.

The fifth characteristic of a profession is the one that I think is most debated. It states that practitioners are relatively independent and regulate their own policies (Chitty & Black, 2011, p. 66). Nursing is autonomous and self-governing. Over time, nursing has established its own values, ethics, and protocol. However, many would argue the actual performance of nursing itself still falls under the direction and control of physicians and administrators.

Nursing is classically regulated in the facility in which the nurse works by their institutional policies. Also, many people feel that because a nurse must have orders from a physician, they lack autonomy (Chitty & Black, 2011, p. 66). This debate about autonomy ties in with the discussion on the third criterion. Nurses provide nursing care autonomously; they do not practice medicine.

For the sixth of Kelly’s eight characteristics, the statement made is that practitioners are motivated by service and consider their work an important component of their lives (Chitty & Black, 2011, p. 66). Nursing easily meets this criterion. I believe the majority of nurses, if asked why they chose nursing, would immediately respond that they want to help others or to make a difference. I believe most nurses derive their greatest satisfaction from nursing when they know they have done a good job, helped someone in need, or simply lightened the load that burdens a patient. Nursing is one of the purest forms of altruism as I understand it. The importance of their profession in their lives is apparent; simply ask a nurse what they do.

The seventh and eighth characteristics can be addressed together. The seventh characteristic is that a code of ethics exists, and the eighth is that there is an organization that supports this code (Chitty & Black, 2011, p. 66). There are a number of professional organizations to which nurses belong. The ANA, or American Nurses Association, is the foremost nursing organization in the United States. The ANA sets policies, has established the most widely recognized code of ethics, and lobbies to promote the recognition of the field of nursing (“NursingWorld”, 2012). All licensed nurses are regulated by their state board. Each state sets standards for scope of practice.

According to Kelly’s eight characteristics, the field of nursing certainly meets the criteria of a profession with little room for debate. Over the last century, nursing has evolved from a task-oriented occupation to an intellectual profession through research, education, and organization. There are some barriers to complete acceptance of nursing as a profession. Nurses have a responsibility to themselves to advance their profession both internally and in the eyes of the public. I consider nursing to be a profession, and will continue to practice as a professional nurse to the best of my ability.

Nursing as a Profession. (2016, Apr 30). Retrieved from https://studymoose.com/nursing-as-a-profession-essay 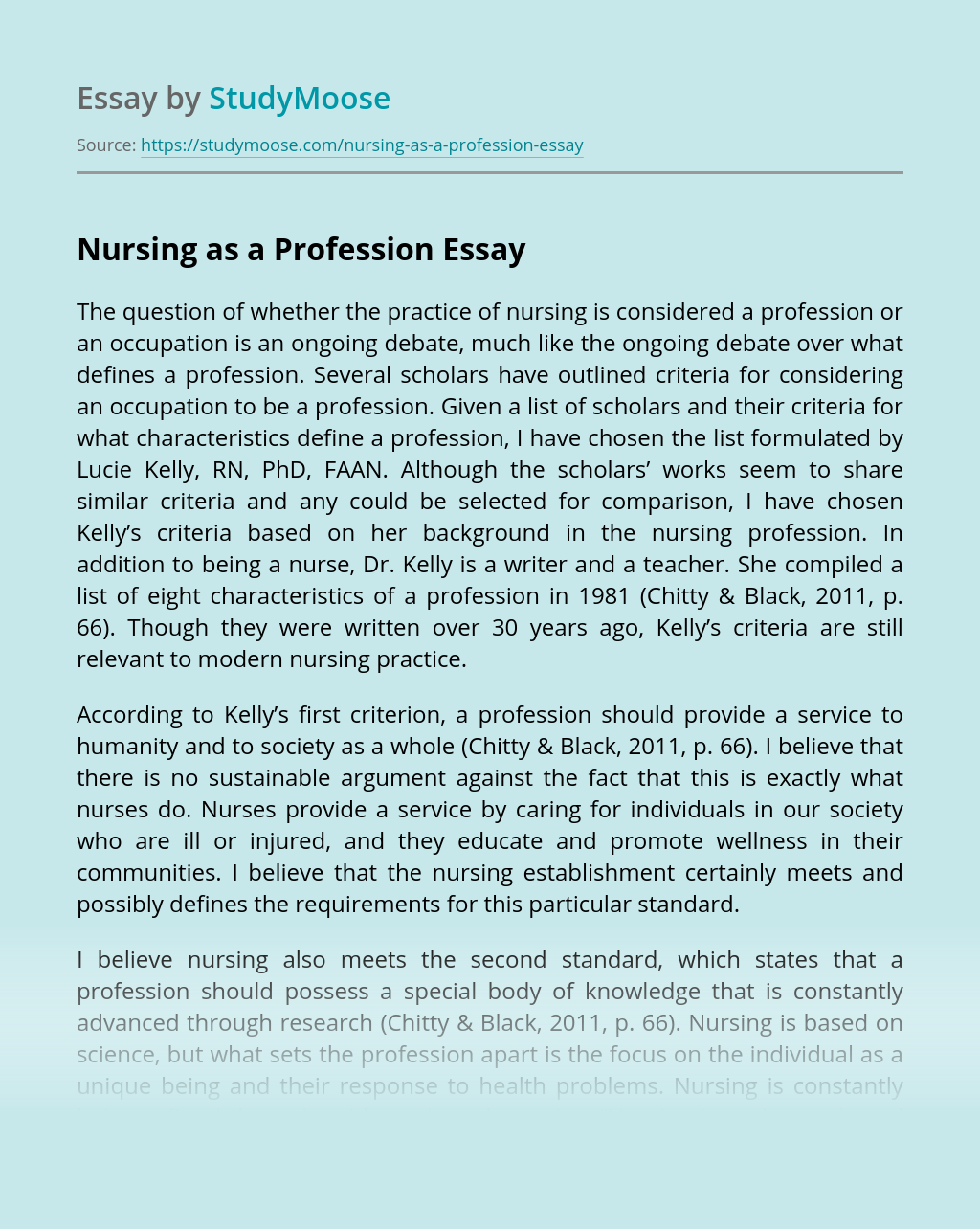