Novel "Lord of the Flies" by William Golding Analysis

Everybody relies on a government. It keeps order, makes rules, but most of all, forces a society to cooperate with one another. In the novel “Lord of the Flies”, William Golding presents a group of young schoolboys who must rely on a government to survive. Without rules and order, society will crumble and people, not knowing the difference between right and wrong, will become savage. In the beginning, the recognition of a need for order shows itself and is well accepted.

Don't use plagiarized sources. Get your custom essay on
“ Novel “Lord of the Flies” by William Golding Analysis ”
Get custom paper
NEW! smart matching with writer

After collecting the remaining people from the island, a government was established through a democratic way.

When “Ralph raised his hand for silence,” the whole group of boys stood where they were, not talking, ready for Ralph to say some more. Ralph then takes advantage of his new power and states that “Everybody must stay round here and not go away. ” The main advantage of their newfound government is that it can make rules and keep them followed. The boys appreciate and try to maintain rules because without the rules, there is nothing to keep the group together.

“The rules are the only things we got” says many of the kids, but unfortunately words are not enough, and actions must be taken to maintain the command of the government.

The government is flourishing; rules are being created and everybody seems to want it. Although the government starts strong and seems to be needed, some boys wish for things to be done their way and become rebellious. Ralph claims that the “lawful world” is slipping away.

He compares the law to the world, showing the laws importance. “The world, that understandable and lawful word, is slipping away” says Ralph as the first rescue ship passes. Jack says that he doesn’t need rules because he is strong; the other kids start to follow him.

With such great self-confidence, he revolts against the government. Ralph, noticing the subtle slip in order, tries to reclaim it by enforcing more rules. During an assembly, he enforces the small rules to a great extent. One of these rules are This, instead of assisting him, helps Jack rebel with his group. With enough anarchists, even the strongest government can fall to its knees. With the crashing of the government, society crumbles and people cannot tell the difference between right and wrong.

Jack, wanting all that the others hold precious, steals Piggy’s glasses. After the raid on the camp, on their way back, Ralph spotted “From his left hand dangled Piggy’s glasses. ” Jack knows that the glasses are the only way for Piggy to see. He basically stole Piggy’s vision. Out of revenge and greediness, the remnants of Ralph’s fire was stolen by Jack’s tribe. Jack calls them cowards and fools as he states that “- at night, in darkness, and stole our fire. They stole it.

We’d have given them fire if they’d asked. Just so that he can own everyone, Jack takes Sam and Eric as hostage in order to convince Ralph to join. “The painted group moved round Samaneric nervously and unhandily” as they grabbed them and tied them up. Soon after the loss of ethics, savagery begins to break loose. Since the people cannot tell the difference between right and wrong, they become savage and have the need to kill. The need to kill is too overwhelming for Jack and so he goes for Ralph. “Jack made a rush and stabbed at Ralph’s chest with his spear” during their fight atop castle rock.

For mere pleasure, Sam and Eric are tortured by Jack’s tribe, mainly by Roger, the most evil of the schoolboys. “While Ralph was eating he heard fresh noises- cries of pain from Sam and Eric, cries of panic, angry voices. ” The defense system for Jack’s tribe’s area is a large boulder, made to roll down the hill and crush everything. From the first time that Roger had seen this, he was content. Liking it so much, he rolled it over onto Piggy, causing him to fall of the mountain and die. “High overhead, Roger, with a sense of delirious abandonment, leaned all his weight on the lever…

The rock struck Piggy a glancing blow from chin to knee… His head opened and stuff came out and turned red. ” Roger has lost all consciousness and looks as though to be hallucinating, when really, this just the face of savagery. When Ralph refuses to join their Jack, he plans on hunting Ralph and are claiming to cut off his head and place it on a stick. Sam and Eric told him that “Jack’s tribe hate you Ralph, they’re going to hunt you. ” Hate has consumed Jack, which influences all of his tribe. They channel this hate towards hunting Ralph.

Jack’s tribe has forgotten their principles and therefore cannot see how what they are doing is wrong. With the downfall of the government, the social order will diminish, and the citizens will lose their moral, causing harmful actions to be taken. At the beginning of the story, the government is seen as God and is worshiped. The anarchist, Jack, rebels and manages to retrieve followers, who then overthrow the government. Without order and knowledge of the difference between right and wrong, savagery will break loose. Rules and order are the key to survival.

Novel "Lord of the Flies" by William Golding Analysis. (2020, Jun 02). Retrieved from https://studymoose.com/novel-lord-flies-william-golding-analysis-new-essay 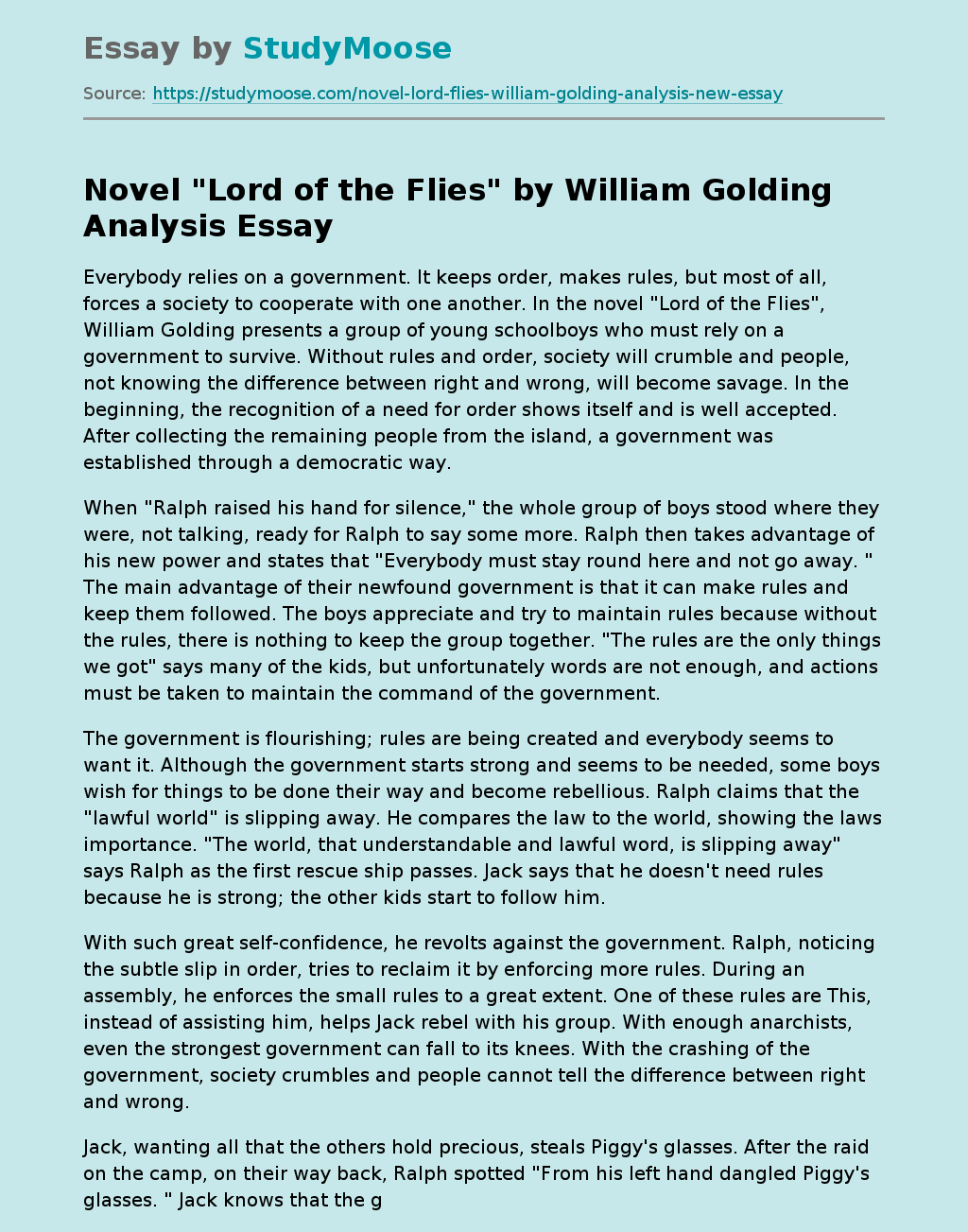