Nikola Tesla was a scientist who lived nearly a century ago, born in Serbia in the middle of the night during a thunderstorm on July 10, 1856. Tesla’s interest in electricity was inspired by his mother, who created a small electrical appliance while he was growing up. Tesla was a genius who had a photographic memory and was able to imagine and tweak inventions in his head that were three-dimensional. Tesla also knew eight languages (Anderson, 2017).

Don't use plagiarized sources. Get your custom essay on
“ Nikola Tesla An Innovative Genius ”
Get custom paper
NEW! smart matching with writer

He later quit so he could work on his alternating current project. Tesla and Edison soon became rivals, their most famous feud being the one about whose electrical system would succeed more: Tesla’s alternating current system, or Edison’s direct current system. He became a U.S. naturalized citizen in 1891 and was a germaphobe, always requiring a stack of 18 napkins while he dined (Jacobson, 2013).

Tesla created many inventions that we still use today and many others that led to the inventions we have today, like his idea that led to smartphone technology that included: stock quotes and telegram messages, encoding them and assigning them frequencies, and broadcasting the frequencies to a handheld device.

His first invention was the voice amplifier for the telephone receiver in 1881. His childhood dream was to design the first hydroelectric power plant in the United States, which he accomplished in 1882; it was installed at Niagara Falls. He also invented the Tesla Coil in 1891, and it is still used in radio technology today.

George Westinghouse bought Tesla’s patents for alternating currents for $60,000 in cash and stock for the Westinghouse Corporation in 1888 (Kelly, n.d.).

The people who knew of him also knew that he was a little crazy, like other great inventors. When he was trying to create wireless power transmissions, he electrocuted butterflies and blew out power stations, creating blackouts. He also claimed to only sleep two hours per night, and was prone to spending two days or more in his laboratory without sleeping at all! (Kelly, 2014, paragraph 7). And after his death, all of his possessions were taken by the Office of Alien Property, but were eventually given to his family, except for a few objects that are still locked up. I feel that after learning this, you wonder why Tesla’s possessions were taken by a government office that has to do with disposing of enemy-owned property that existed after the world wars. What made his things so suspicious? Or should we be suspicious of all inventors, or was it one of his inventions that got their attention?

Nikola Tesla is a unique and original man who was ahead of his time, although I believe that you would have to be ahead of your time in order to be a great inventor. You don’t hear about someone as great as Tesla everyday (unless you’re hearing about the same person) and I believe that he is up there with the greats, like Charle Babbage and Leonardo da Vinci (Metaxas, 2017). 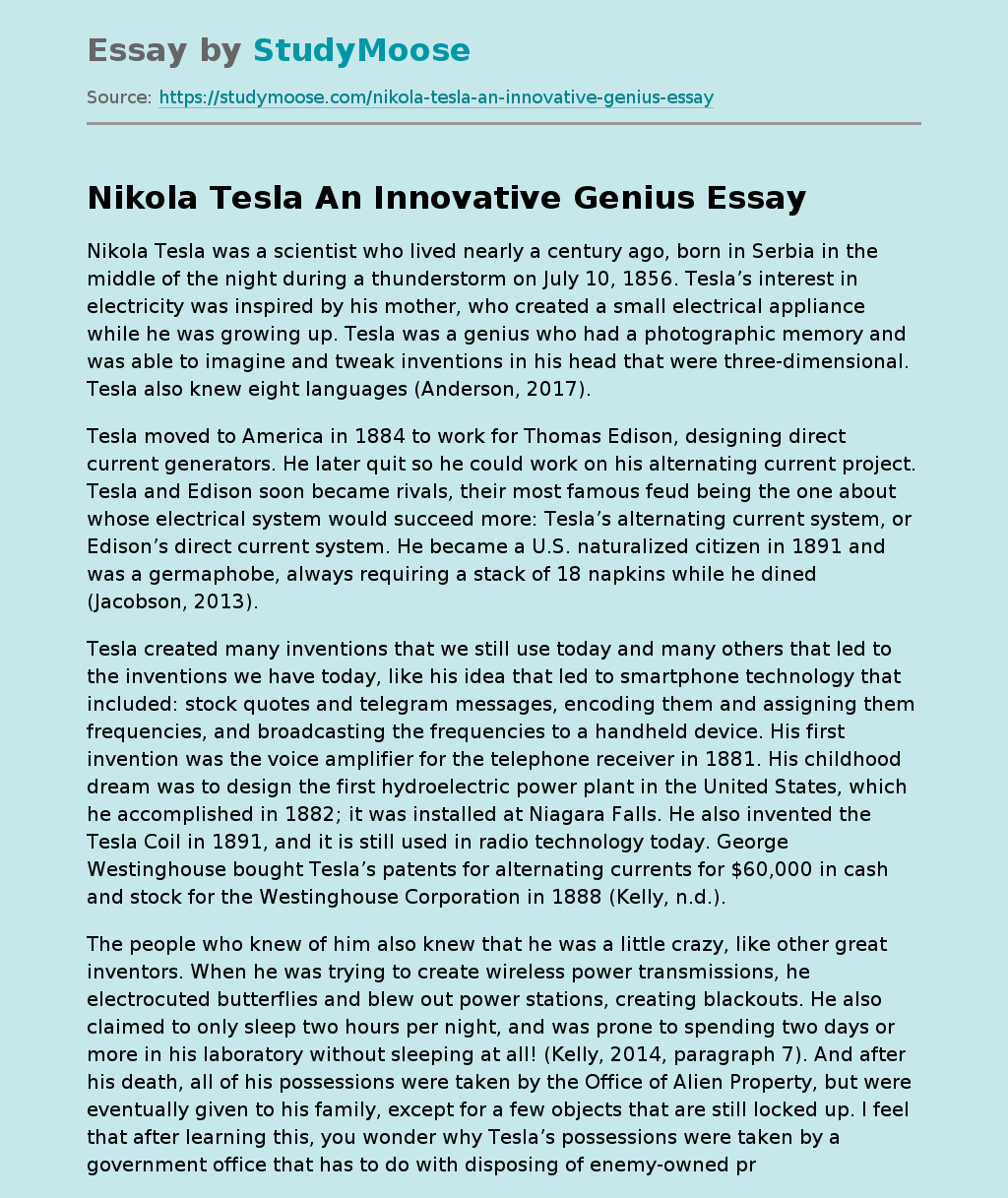