Nikola Tesla and his Conspiracies

Nikola Tesla was one of the greatest inventors during the history, due to his advanced research in his lifetime and the discovery of alternating current (AC) and work with electromagnetism. Before dying he was exploring the possibility of sending electricity to long distances wireless by sending Extremely Low Frequency (ELF) waves. Since his last project was never finished and due to the strange death, several conspiracy theories prowl around his inventions and death.

The conspiracy theory states that big amounts of ELF waves are transmitted to the ionosphere, which act like a mirror and reflects the waves on earth.

These waves hit the earth and the potential energy is released causing natural catastrophes. In 1993, different divisions of the U.S. Government developed the High Frequency Active Auroral Research Program (HAARP), based on Tesla’s studies. According to the conspiracy theory the U.S. is using HAARP as a weapon against countries like Iran, Pakistan, Philippines and others as a weather weapon.

This paper exposes Tesla’s life and his most important investigations, to recognize the conspiracy theories that surround him.

1. Nikola Tesla and his inventions

This chapter contains some of the most relevant episodes in the life of Nikola Tesla and “his inventions”, based on his own publications before his controversial death.

Nikola Tesla was born in Smiljan, Croatia[1] in 1856, surrounded by a clergy family, who wanted him to enter the Greek Church after he graduated (Start Publishing LLC, 2013).

In 1873 after he surviving from Cholera, he decided to enter in 1875 the Polytechnic School at Graz to become a mathematics and physics professor, and since his first year of studies, Tesla started to develop controversial experiments with a Gramme dynamo: he claimed the commutators were not necessary, leading him to change to the engineering curriculum (Start Publishing LLC, 2013). After finishing his studies and moving around Maribor, Gospic, Prague and Budapest, in 1882 he was hired in Paris by the Continental Edison Company dedicated to electric lighting, where he sees the chance to publish his work (Start Publishing LLC, 2013). Then he decides to go to the Unites States of America to work with Thomas Alva Edison (Start Publishing LLC, 2013).

After publishing several patents, in 1888 he published his first work at Columbia University in New York: “A New System of Alternate-Current Motors and Transformers”, where he proved the commutators could be dispensed from motors, by using polyphase currents, which headed him to experiment more with AC and high frequencies, guiding to some of his most relevant inventions (Tesla, 2007).

From that moment, until his death, Nikola Tesla developed and published hundreds of patents, articles and books, and received recognitions for his work. Finally in 1943 he died in New York due to unknown causes that will be further reviewed in the third chapter.

“Tesla was an inventor, but he was much more than a producer of new devices: he was a discoverer of new principles, opening many new empires of knowledge which even today have been only partly explored” (O’Neill, 2007).

As showed on his Life and Work, since Tesla was a young man he started researching and developing his own ideas, improving the motors and generators company. In fact, in 1888 he received the patent for the induction motor still used today (Tesla, 1904). Two years later, he founded with other investors in the Ames Power Plant, the first power station to transmit high voltage AC for long distances (Start Publishing LLC, 2013). The same year he would invent the Tesla Coil and transformer to power wireless lighting systems, which also contributed in radio as a “system of transmitting electrical energy” and “an electrical transmitter” as he called it (Tesla, 1904, Chapter 4).

In 1899 Nikola Tesla detected a new geo-electrical phenomenon: terrestrial stationary waves, which supported his theory of electricity transportation around the world and later on it would be the basis of the World-Wide Wireless System (Start Publishing LLC, 2013). “When in 1900 I obtained powerful discharges of 100 feet (in the Colorado Springs laboratory) and flashed a current around the globe, I was reminded of the first tiny spark I observed in my Grand St. laboratory and was thrilled by sensations akin to those I felt when I discovered the rotating magnetic field” (Tesla, 1904). This is how Tesla’s most ambitious project started in 1901: the construction of the Wardenclyffe Tower to send wireless power around the world. Although he invested all his money on his research investors dropped the project and the Wardenclyffe Tower was never finished (Start Publishing LLC, 2013), leaving the uncertainty that still today is maintained if it is possible to send electricity all over the world.

The conspiracy theories behind Nikola Tesla start with his controversial work and hard relationship with colleagues, and the apparent collaboration in the World War II, which supposedly led him to be murdered. Besides that, the use of his research as a basis to develop Weapons of Mass Destruction (WMD) is another conspiracy attributed to Tesla.

There are basically two conspiracy theories behind Tesla’s life and work. The first conspiracy states that Tesla was murdered by powerful bankers from the U.S. because Tesla’s project to provide free energy to the world was not convenient for their economic interest, and the second conspiracy says that Tesla was murdered because some people thought that he had advanced studies to create WMD. To put into context this second theory, it must be taken into consideration that he died while the WWII was taking place and for this reason it can be deduced that, there were some interest on his projects from different military agencies around the world.

One thing that cannot be denied is that Nikola Tesla had a brilliant mind, he developed several interesting projects which were decades ahead of their time. By the nature of his inventions, military intelligence circles or giant corporations could be interested on Tesla’s projects.

After Tesla’s death in January 1943, and because of the political-social-economic situation of the time (the WWII) the FBI and some other U.S. Government agencies could be quite interested in Tesla’s ideas and projects regarding weaponry. There was some fear that Tesla’s work could fall into the hands of Soviets or any other powers. Just right after Tesla’s death, his nephew “Sava Kosanovic” arrived at the hotel where his uncle died, but according to him, there were several technical papers missing as well as a notebook which was marked as “Government”. An investigator from the FBI said that the U.S. was “vitally interested” in saving Tesla’s documents, in deed envoys of the Office of Alien Property[2] went to Tesla’s room at the New York Hotel and collect all his belongings, Figure X (PBS, 2004).

According to the website www.psb.org after the WWII, the interest of beam weapons grew up, and Tesla’s basic ideas were taking into consideration to develop these weapons, the papers that contain Tesla’s ideas were never found. Many years after this event, scientists have been looking for those papers without any success (PBS, 2004).

There is another theory that says that Tesla was murdered by Hitler’s people, according to a guy called Eric Bermen, he was dating a girl, he say that the girl’s father was Otto Skorzeny a legendary SS (Schutzstaffel) involved in the WWII, and an officer-cadet from the Hitler’s bodyguard regime, Figure X. After Skorzeny death, Bermen collect data about Skorzeny’s Nazi cohorts and created an unpublishing manuscript in which reveal information such as: “Skorzeny’s role (with Reinhard Gehlen) in the assassination ofNikola Tesla(suffocation) on January 6, 1943 after tricking Tesla on January 5 into revealing the full details of his most important discoveries and then stealing his most valuable inventions, along with the contents of his safe, which were delivered to Hitler” (Adachi, 2007).

2.2 Tesla’s HAARP project, the conspiracy behind

The conspiracy theories about HAARP Electromagnetic waves would be used to make them collide with the ionosphere which would heat, resulting in an alteration of climate, including suspected that these same waves when falling on the earth’s crust would cause a series of vibrations which could give as a result, earthquakes and volcanic eruptions.

Researchers and scientists believe that the increase in hurricanes, floods and droughts could have been caused by HAARP, HAARP meanwhile said that they only use a small part of the energy that are capable of generating, if so, what would happen if they use the billions of watts that produces the entire project?

Even more adventurous opinions say that the mind control may be another objective of HAARP is now known that electromagnetic waves can lead to physical illness; alter the human psyche causing hysteria, hallucinations, items that would be used for crowd control.

As we exposed previously, Tesla’s project HAARP had the purpose to delve into the effects of electromagnetic energy on the ionosphere. Conspiracists say that the development of this project had a sinister intention. They claim that HAARP is actually a WMD developed to break satellites and communication by blitzing the atmosphere with electromagnetic waves. These people believe for example, that the blackout in the North of the U.S. and South of Canada in 1993 was a consequence of the HAARP project (Theories & Societies, 2008). For this reason, conspiracy theorists affirm that Tesla’s project about the transmission of electricity via wireless had been hushed up by the biggest electrical equipment companies.

On the other hand, researcher Bertell R.[3] conducted a research about HAARP and she concluded that the HAARP program directed by the U.S. Air Force and the U.S. Navy was designed to“understand, simulate and control ionospheric processes that might alter the performance of communication and surveillance systems” and with this create the following effects:

So Bertell R. firmly believes that HAARP is not an isolated experiment but it belongs to an integral military program and claims that the project can be sold as random project to the public (Bertell, 1996).

Below can be read some other scientists and agencies who think the Project HAARP has a dark side (Global Research, 2007):

Some people still claim that HAARP is a WMD waiting to be used by the military as a “death ray”. The credence is that the slight doses of microwaves sent to the ionosphere are just samples compared to the actual power of the machine. Actually they also think that HAARP could also conduct its rays anywhere on earth and can be used to trigger major weather disasters, earthquakes, mass brain damage on a global scale on request.

HAARP is not operated by the military of the U.S. nevertheless the project is under the command of the DARPA (Defense Advanced Research Projects Agency) this means that somehow it has to be related to the defense of the U.S.

[1] Smiljan used to be in the military frontier of Austra-Hungary.

[2] TheOffice of Alien Property Custodianwas an office within the Government of theU.S.duringWWI and WWII, serving as acustodian of enemy property.

[4] State Duma was a legislative assembly, it does not exist anymore. 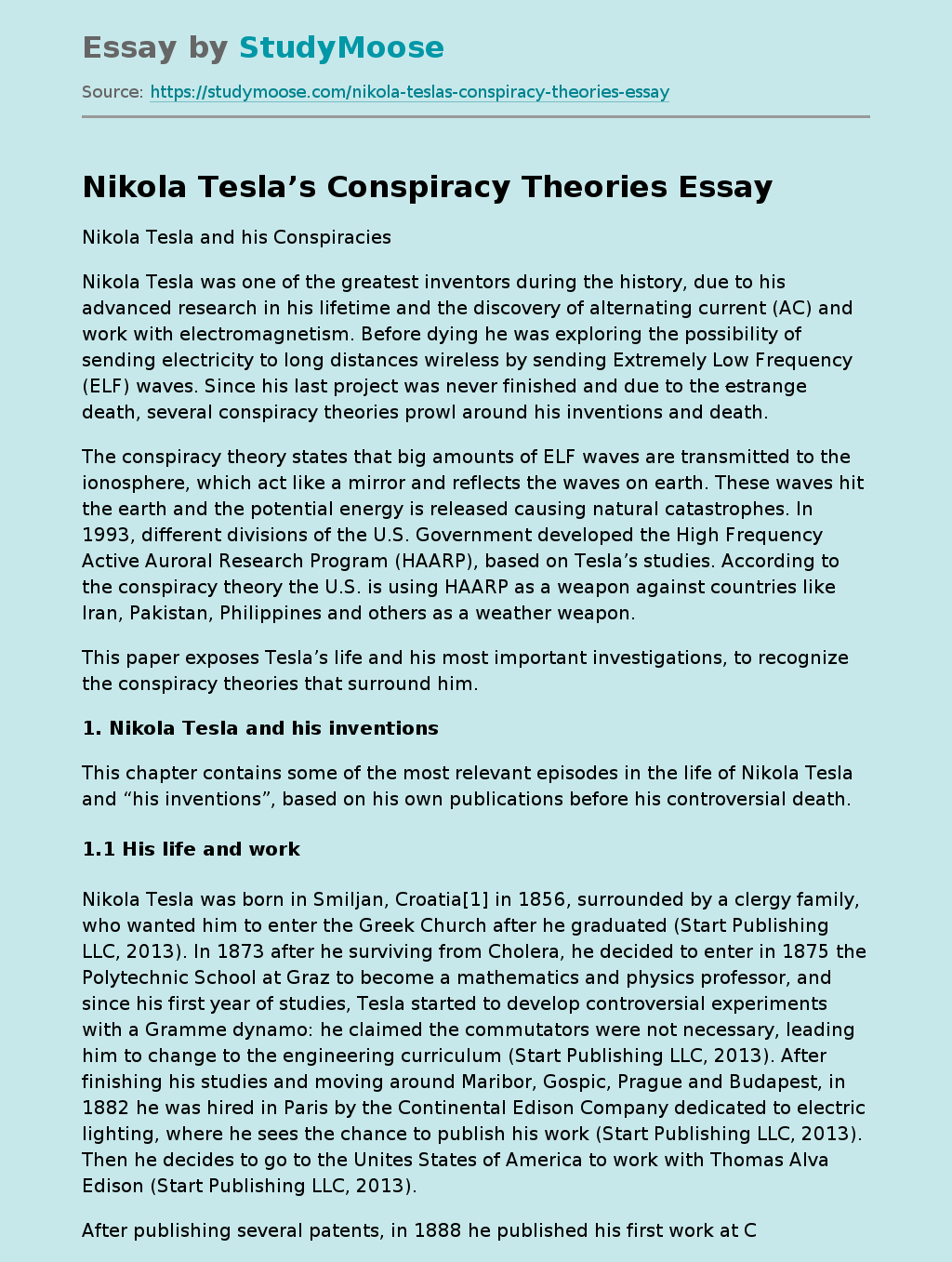