Conspiracy Theories and The Cold War

Much has been said about man’s first landing on the moon in the year 1969 and yet the conspiracy theory that came to explain how NASA lied to the whole world about moon landing has given the argument a different angle. When Neil Armstrong is said to have uttered the famous line, “that’s one small step for a man, one giant leap for mankind”, questions have emerged whether he was referring to a “giant leap” in mass deception. Did American astronauts actually make it to the moon in 1969, or is the entire tale a mere slice of blue cheese? This paper shall seek to debunk the moon landing expedition as presented by the NASA.

It has to be noted that the moon landing episode is said to have taken place in the 1960s, a time when the United States and the Soviet Union were battling for space supremacy in the infamous Cold War era. The firing of Yuri Gagarin by the Soviet Union in 1961 is said to have gotten the Americans panicking as they could not stomach being beaten by their bitter rival.

The Russians are said to have been the first to launch humans in space orbiting the earth. They had made their own advances and progress in space technology and this send the Americans panicking.

In the confusion that followed, President Kennedy was forced to propose something that could save the American face by pioneering the landing of the first man on the moon in the late 1960s.

He gave an impassionate speech which led to the securing of billions of dollars for the project. This was to be the birth of the moon hoax. The moon landing project leaves a lot of questions unanswered which has led many to doubt the authenticity of the mission (Bennett, & Percy, 2001). The motives of the hoax as suggested include Cold War prestige, money, distraction and the risk that the mission posed.

During the Cold War, the United States regarded the winning of the space race as vital to its establishment as a world power. Going to the moon would have been an expensive and impossible mission and therefore faking the landings was the better option to succeed in the battle for the space race. The moon landing project may as well have been started to raise money for the political class as the space industry, more like the military industrial complex has to have a fertile base for its own survival (Rene’, Lucas, & Wolfer, 1994).

It is also argued that the United States government wanted to distract the public from the Vietnam War as what followed after the moon landing claims was that the United States stopped its involvement in the War all the same. The risks that actual moon landing mission posed were so great that it became necessary for the proponents of the project to lie. This is because based on the technology that was available at the time, the chance of disastrous failure of the mission was it to be attempted was very high (Knight, 2003).

Criticism of the Evidence of the Moon landing project: A lot of criticism has been leveled against the evidence produced by NASA as proof that Neil Armstrong and his fellow astronauts indeed landed on the moon. The analysis of the pictures for instance reveals great loopholes that suggests to the contrary. NASA has failed to offer answers to the nagging questions regarding the pictorial evidence that is claimed to have been taken from the moon (Rene’, Lucas, & Wolfer, 1994).

Some of the doubts placed on the pictures include the fact that these pictures depict the ground in the distance being much darker than the foreground as though the astronauts stood in a pool of light. Several photos provides evidence of extra-lighting but such light is supposed to have not been used. In some photos, the light is seen as coming from an impossible angle and this puts the authenticity of the moon landing episode in doubt. For instance, Aldrin’s boot is lit from below when he moves down the ladder (Hawkins, 2004). Still in some photos, there is contradiction with the television pictures of the similar event.

Some photographs by one of the astronauts indicates that they were taken from slightly above the eye level in relation to the subject whereas in the screen, the reflection of the astronaut holding the camera indicates that it was held at chest level. The Length of the shadow in the Apollo 12 photographs does not coincide with the angle which the sun is supposed to have been. In some wide area photographs, the shadows are seen pointing in different directions (Bennett, & Percy, 2001). Another discrepancy in the evidence can be identified in the sound recorded.

It has been noted that the recording of the lunar landing did not capture the sound engines of the rocket. When the astronaut is heard calling the remaining distance to the surface, it is believed that he must have been few feet away from the engine which is supposed to have been producing significant noise. There are also some doubts cast in respect to sound on the realization that questions from the control room were answered without delay as one would have expected. This looks quite strange considering that even with the technology of the 1990s; delay from satellite links could still be noted.

There is also evidence that once in space, the individuals’ voices goes tense though the voices of the astronauts were normal even when they landed on the moon (Knight, 2003). In general, there are various space odds that have been observed from the evidence of the moon landing project as presented by NASA. The flag that was supposedly raised on the moon is seen to flatter and one would wonder how this could be when on the moon, there is no wind. Allen Shepard who boarded the Apollo 14 is seen playing golf on the moon before the world audience (Hawkins, 2004).

He was teased about slicing the ball to the right and yet slicing can only occur when there is uneven flow of the air. On the moon, there is no atmosphere and air and thus this should have been impossible. In one of the photos captured by NASA in regard to Neil Armstrong is captured as he prepares to ‘take the giant step for humanity’ and this leaves a lot to be desired. The one who took the photograph must have been on the surface of the moon and we are told that Armstrong was the first man to step on the moon, then who is supposed to have taken the photo and how?

If the pressure in the spacesuits was considered to be great, the astronauts are expected to have been puffed out and also they must have had some problems bending their joints. This is not the case from the footage (Rene’, Lucas, & Wolfer, 1994). Another doubt is thrown to the claims of the mission considering that the Americans did not leave any sign that could be seen from the earth’s surface and yet this incident was triggered by space dominance competition during the Cold War. Also, it has to be noted that heavy radiation protection must have been required for the astronauts and their films and camera.

NASA claims that the protection of the cameras was done by painting the cameras with aluminum paint. According to research findings, the Apollo Spacecraft would have required a 2 meter thick protection from the cosmic radiation that could have adversely affected the astronauts on board (Hawkins, 2004). Conclusion: The thought of man ever landing to the moon has remained to be a controversial one. Many have been made to believe that actually this incident happened but a critical analysis would suggest otherwise.

Considering the technology of the time and the political context of the supposed landing, the conspiracy theories that have been advanced are worthy pondering about. Many faults have been pointed out in the evidence presented by the NASA to back the moon landing mission and that NASA has failed to offer convincing explanations that could help in quelling the doubts that have been brought forward. Before convincing explanations are provided by NASA, it should be regarded that the moon landing project was actually a deception that caught the world when it least expected.

However, it was short-lived as the loop-holes in the so called evidence for the mission have been exposed.

Conspiracy Theories and The Cold War. (2016, Sep 08). Retrieved from http://studymoose.com/conspiracy-theories-and-the-cold-war-essay 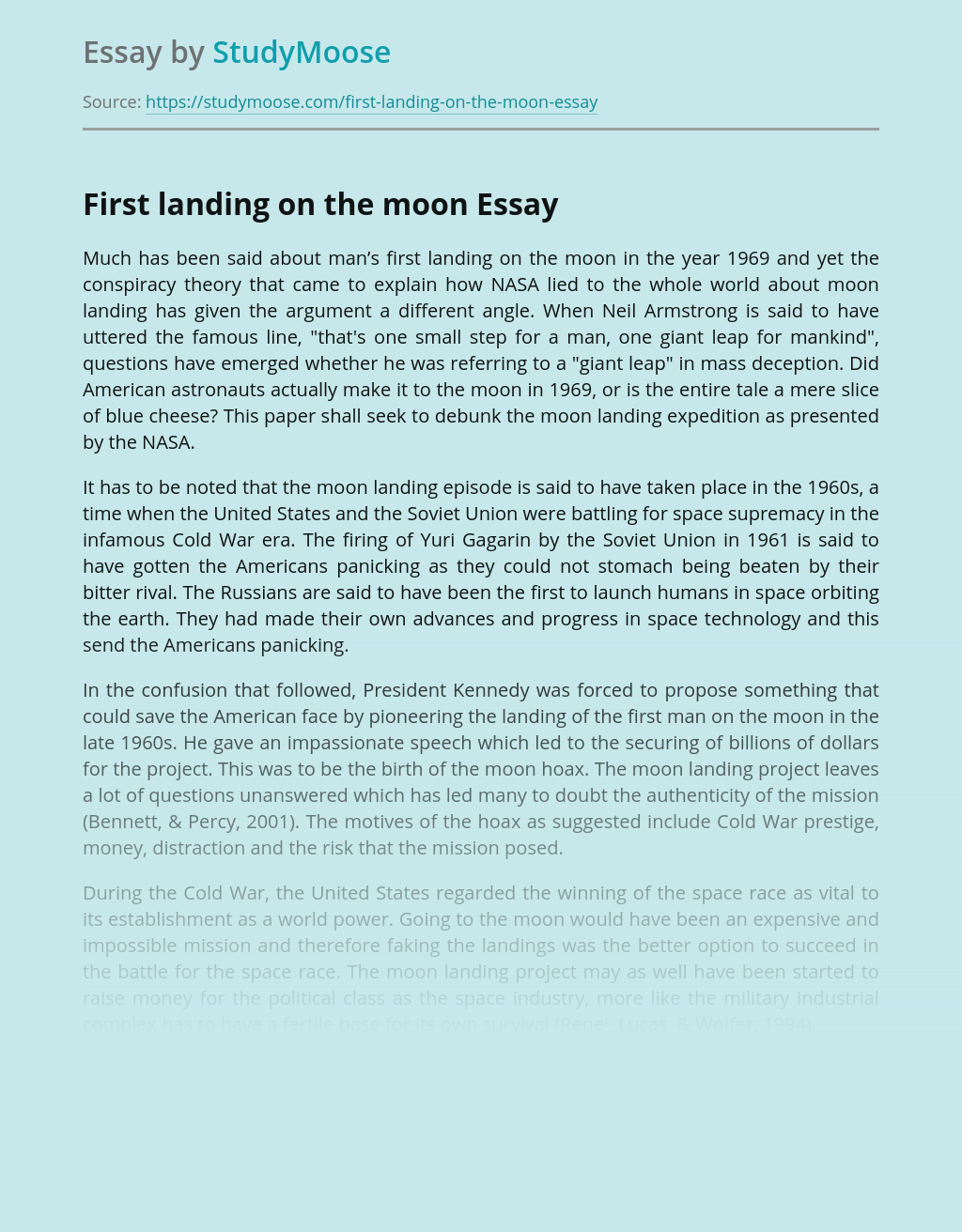 Don’t waste time
Get a verified writer to help you with Conspiracy Theories and The Cold War
Hire verified writer
$35.80 for a 2-page paper
Stay Safe, Stay Original