Da Vinci – The Genius At The Venetian Las Vegas

While plenty of people are familiar with Da Vinci the painter not as many realize his prowess as a Renaissance man. Perhaps he was the first true man of so many talents that it was hard to peg him as one type of individual. In Da Vinci – The Genius you get a good look at the results of a great mind. You won’t see original works of art but instead you’ll see what has transpired from notes and drawings that Leonardo da Vinci created.

Don't use plagiarized sources. Get your custom essay on
“ Da Vinci – The Genius At The Venetian Las Vegas ”
Get custom paper
NEW! smart matching with writer

Da Vinci was an artist, scientist, mathematician, architect, inventor and so much more. This enormous amount of brain power from one man has been highlighted in various forms before but this traveling exhibition highlights some of his inventions that today we might take for granted. As a result of the research to put together such an exhibition the idea of one large exhibition that celebrated Da Vinci and his Genius was created and can be viewed in Las Vegas.

For the Mona Lisa he used oil paint, on poplar wood, there doesn’t seem to be any brush specifications, so we can just assume he used normal brushes. He employed a couple of techniques called ‘sfumato’ and ‘velature’. Sfumato, roughly translated from Italian, means ‘evaporated’ or ‘vanished’. This technique involves mixing light and dark paint, using tiny brush strokes, to create a smoky blend between the two colors. Velature is when an artist mixes paint on the canvas, instead of on a palette. Leonardo perfected both these techniques, as well as having his general knowledge of the human anatomy and the laws of nature to make his paintings more realistic.

Da Vinci was left handed and did not force himself to switch like most people did then. In his day with quill pens, it was important to pull the writing instrument rather than pull it. When a right handed person writes left to write he or she pulls the pen and his or her hand does not smear wet ink. When a left handed person writes left to write he or she pushes the pen for less control and his or her hand smears the ink for less legibility. Rather than change his writing hand, he changed the direction in which he wrote. This allowed him to more quickly and easily write notes to himself without having to conform to the stifling conventions at the time, an overall goal of the renaissance.

Da Vinci – The Genius At The Venetian Las Vegas. (2016, Nov 25). Retrieved from http://studymoose.com/da-vinci-the-genius-at-the-venetian-las-vegas-essay 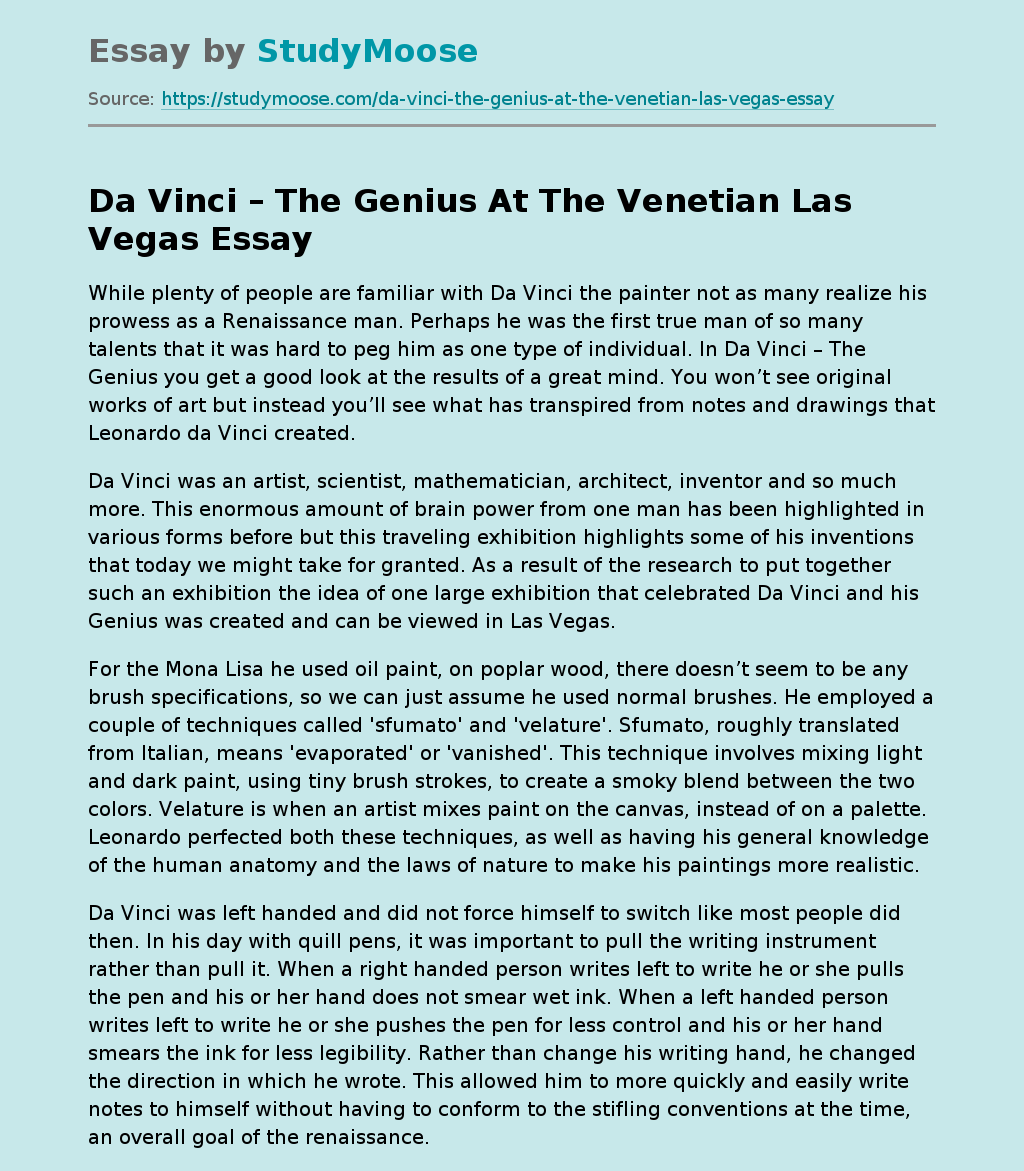