New Look Jackets Inc. (NLJ) is a well-established manufacturing company that makes leather and nylon jackets. The company has many long standing customers due to their excellent service and quality of products. In 2012, they had some difficulty with quality and filling orders on time due to the increase of demand to the leather jackets. A variance analysis has been completed and this report will break down the results.

The sales volume for NLJ is favourable as a whole because 10,000 more jackets were sold then budgeted.

Turn in your highest-quality paper
Get a qualified writer to help you with
“ New Look Jackets Inc. : Variance Analysis ”
Get high-quality paper
NEW! AI matching with writer

The sales mix was budgeted at 95% Nylon and 5% Leather but the actual was 85% Nylon and 15% Leather. The actual sales mix was a composite unit consists of 0.85 units of sales to the Nylon jackets and 0.15 units of sales to the Leather jackets. The reason for this favourable variance is due to the increase in demand of leather jackets. The marketing team did not foresee this trend therefor did not include the increase of leather jackets in the 2012 budget.

NLJ has a favourable sales quantity variance due to the total jackets sold exceed the budgeted jackets.

They have a $139,625F sales quantity variance because sold 10,000 more jackets then what was budgeted. It can also be stated as 10,000 X $13.9625 (see appendix 1) = $139,625F. The 13.9625 (11.6375 Nylon + 2.2350 Leather) is the sum of budgeted CM per unit for budgeted mix. The nylon jackets make up 83.3% of this favorable variance because 77,000 more jackets were sold. This is a more affordable product therefor sales more. The sales quantity variance can be further broken down into market-share variance and market-size variance. The market-share is $349,063 unfavourable; the company did not achieve the 40% of the leather jacket market because of the major increase to demand. The budgeted leather jacket market was 12,500 but the actual market was 125,000, the market increased 10 times. This oversight was the reason for the unfavourable market-share. The nylon jackets were budgeted at 20% market-share and actually were 22% of market-share. The market-size variance is favourable, as the total market-size was greater than expected. The budgeted market unit was 487,500 but the actual size was 550,000, an increased demand of 62,500 units. The market increase is because of the leather jacket demand. In 2012, the nylon jacket market decreased by 50,000 units.

For the nylon jackets all budgeted amounts were achieved expected the variable selling and administration. The variable selling and administration was favourable by $14,025. The favourable variance was because budget was 15 cents higher than actual. The decrease in the selling and administration cost was due to the decrease in demand for 2012. The leather jackets flexible budget variances were all unfavourable excluding the direct labour rate. The direct labour rate was favourable due to the inexperience workers hired to produce the leather jackets. The leather jacket market increase significantly so the demand for skilled workers increased. NLJ had to resort to hiring unskilled workers to keep up with demand. This resulted in a favourable direct labour rate but at the cost of sale returns increasing to 8% from 1%. The flexible budget variance is made up of the efficiency (usage) variance and price variance. The leather jacket price variance is 44,550U because the price was understated in the budgeted by 2.70 per unit. The efficiency (usage) variances for the leather jackets are both unfavourable for direct materials and direct labour. The standard labour usage was 2 hours, NLJ actual labour usage was 2.5 hours. This resulted in a 165,000U variance ((2-2.5)*20*16,500). The direct materials efficiency variance was 66,000U. NLJ used 0.2 metres more a jacket then production standards ((2.5m – 2.7m)*20*16,500). These unfavourable variances are due to the inexperienced workers that were hired because of the unforeseen demand in leather jackets.

The sales mix is budgeted for 2013 as 77% Nylon jackets and 23% Leather jackets. With this sales mix the break-even outlined in Appendix 2 is 53,561 Nylon jackets and 16,068 Leather jackets. For both products, this is 53.56% of the actual budgeted amounts therefor break-even should be reach by 2nd quarter. If the expected market size of either jacket decreases demand, NLJ will still be in the black for 2013.

NLJ knows the Nylon market well so the variances were minimal. The leather market is where the company has to spend more time researching and developing the budget to reduce the unfavourable variances. The markets and future trends should be researched in a more detailed matter for 2013.

NLJ is a profitable company and can stay profitable by keeping their long standing customers. They need to research the market and know the trends coming up so they can budget and plan more efficiently. The big swing in unfavourable variances was mainly due to the unforeseen increase in demand to leather jackets. In 2013, NLJ will not see this variances as workers will be fully trained and the marketing and production data is including the upcoming trends. 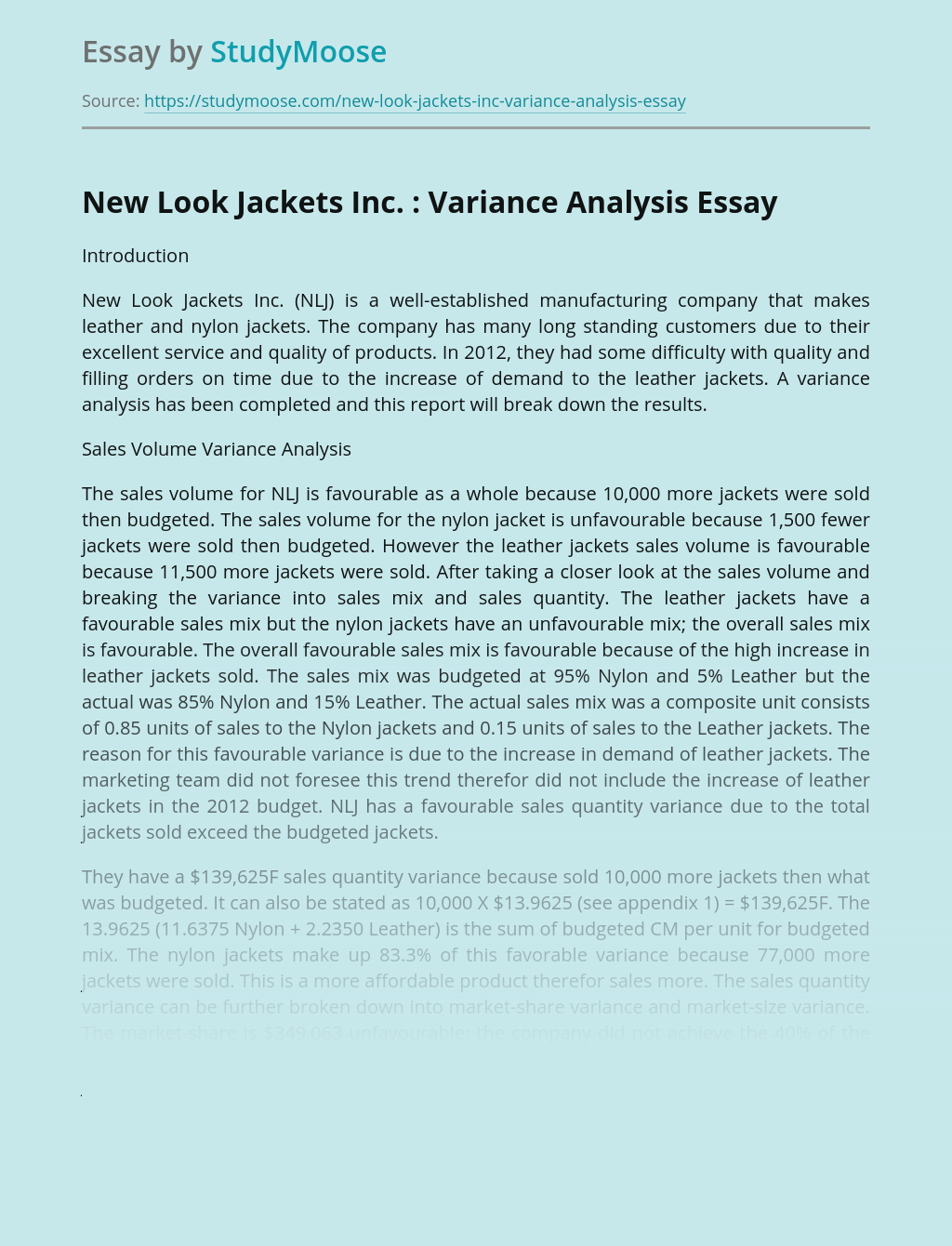 Turn in your highest-quality paper
Get a qualified writer to help you with
“ New Look Jackets Inc. : Variance Analysis ”
Get high-quality paper
Helping students since 2015
Stay Safe, Stay Original