Farley, Mowat’s “Never cry wolf,” is a book based on the research of the lifestyle of wolves in the Arctic Circle. Mowat uses his experience to educate the society of the social ills conducted by the hunters towards the wolves. The book displays the risk that the wolf pack families face due to the human activities in the area. The title of the book acts as a symbol in reference to the story of the boy who cried wolf. The book thus enables the reader to think beyond the tile so as to form an opinion of the author’s message.

Don't use plagiarized sources. Get your custom essay on
“ “Never cry wolf” by Farley Mowat ”
Get custom paper
NEW! smart matching with writer

The book challenges the human communities who are in charge of the nature around them. Humans tend to overstep their authority by infringing on the rights of the wolves. The analysis of the book educates the society of the inhumane activities that humans are inflicting on the animals.

Different passages from the book Interpretation of the passage and meaning I was born and grew up in the farm and never knew what it was to have all I wanted or needed as a teenager in the late 20s The author talks of his life as a child.

He was exposed to animals at an early stage in life due to his parent’s lifestyle. This is a contributing factor to his love for animals. That night the inevitable happened. We were awakened by the most frightful uproar. It seemed to consist of furious barking of a dozen dogs mingled with the roaring of the menagerie of lions The passage elaborates the intensity of the nature that surrounds him.

The conflict between the dogs and the lions displays the fight for power amongst the animals.

Then there were the birds. That spring Angus had bought me a field guide and with its help, I identified forty species that were new to me. The author’s exposure to different bird species enabled him to identify with the different lifestyles that they had. Angus developed a love for all forms of wildlife which in turn made him aware of the plight that the animals had. My most cherished images of the mountain country were not of the forbidding peaks but of the animals The author admits that he has a special place for the animals.

The country has a number of natural resources that are fascinating to any visitor. Amongst all these features, he places priority on animals making them his favorite pastime. Although I would now commit such atrocities against some of the most beautiful creatures extant, I cannot honestly censor the boy who was for what he did then The author admits that his actions are reflective to that of other men. His treatment of the animals is not desirable initially. He learns how to appreciate all sorts of animals making him an advocate for their livelihood.

“The wolf is a savage, powerful killer. It is one of the most feared and hated animals known to man and with excellent reason” Chapter 6, pg. 60.

The passage showcases the dangers that the wolf portrays. Human beings often misinterpret the actions of the wolf due to its dangerous nature. Despite the fact that the wolf continues to become extinct, it poses a threat to the human beings who live next to the packs. This makes the world undesirable by man.

“Evidence obtained by various Government agencies from hunters, trappers and traders seemed to prove that the plunge of the caribou toward extinction was primarily…

The intervention by the government saw the danger that the wolves are exposed to. Human activities were mostly responsible for these dynamics making them the number on culprits. This also displayed possible extinction of the breed of wolves if authorities continued to ignore the circumstances.

“I had made my decision that, from this hour onward, I would go open-minded into the lupine world and lean to see and know the wolves, not for what they were supposed to be, but for what they actually are” Chapter 7, pg. 77.

Morwat made a personal decision to protect the wildlife from the outside environment. One of the steps he takes is orienting himself with the lives of the wolves. This involves learning about the exact nature of the wolves instead of forming an assumption about them. This in turn will help remove the ignorance that he had so as to improve society’s awareness of the wolves.

In conclusion, human beings are responsible for the surrounding environment. This involves observing the safety of all animals in and outside the wild. This is however, not the case in that the number of wild animals continues to diminish due to the human activity. The wolves are one of the animals that continue to face the wrath of human beings. The analysis of the book is thus ideal for the education of the public. This in turn will improve the existing relationship between man and nature. 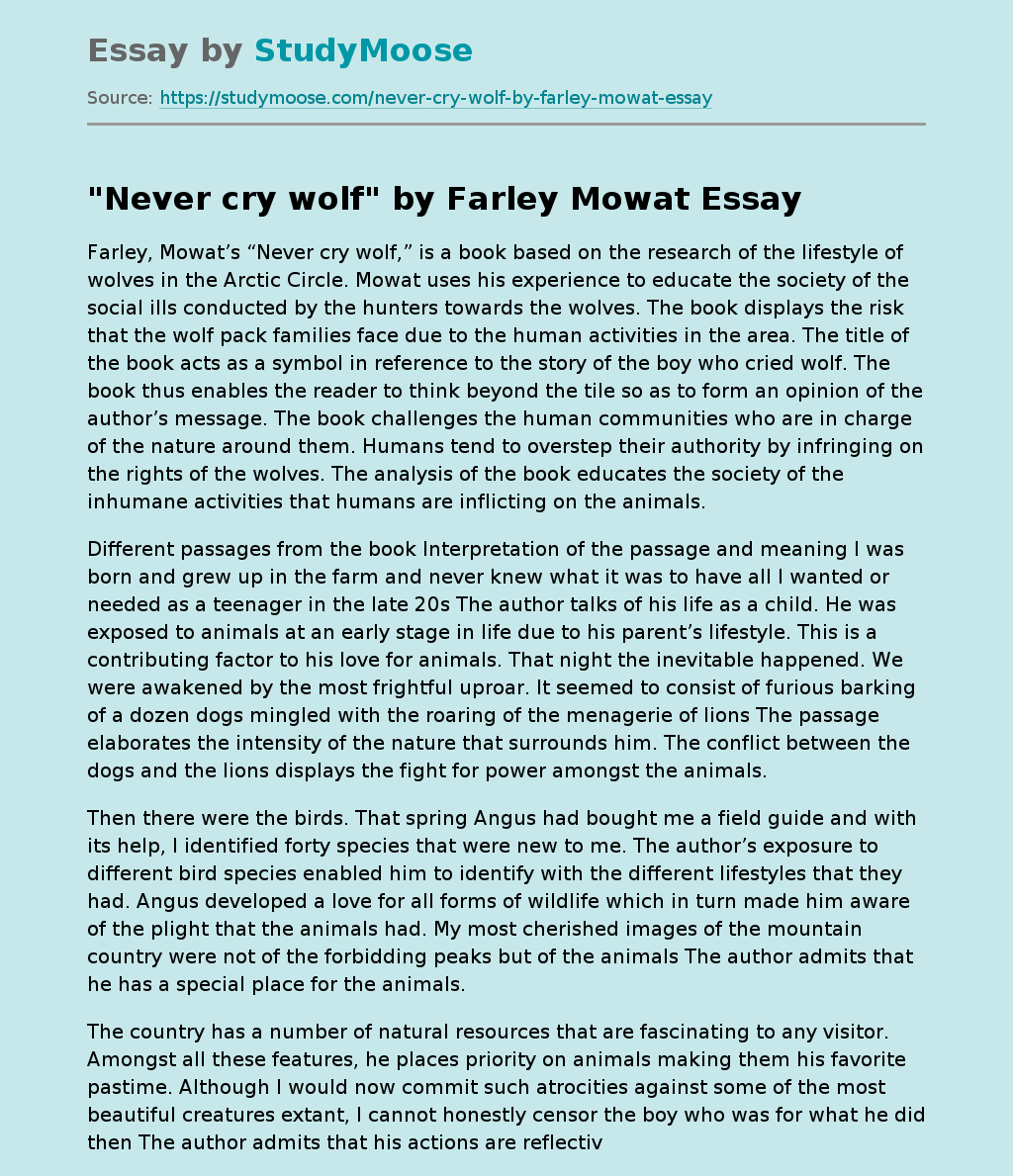