For my reflection paper, I chose to give my opinion on the NBB’s, short for “Neurological-Based Atypical Behaviors”. NBB is defined as a collection of deeds or the behavior of children that happen outside the usual boundaries of self control. According to Dr. Paula Cook, specialist in teaching students with NBB, about 10 percent of students cannot control what they say or do reliably. They are found in almost all schools but they do not all have the same disorder or disease.

Don't use plagiarized sources. Get your custom essay on
“ Neurological-Based Behavior ”
Get custom paper
NEW! smart matching with writer

There are a number of different disorders all under the same title: NBB.

In my reflection I will briefly explain the most common NBB diagnoses along with their symptoms and how they should be dealt with in class. While I was reading this chapter, I came across different scenarios where the students would misbehave but I could not tell why. As I continued to read I noticed that if I did not have the correct training I could not explain how to deal with these children or even recognize that their behavior pointed to a type of NBB.

There are 3 indicators that can help identify if a student has NBB and those are: behavior, language and academic difficulties; in decreasing order of importance.

Behavior difficulties are compulsive, atypical and inconsistent behavior. Language difficulty is when the student has trouble understanding and expressing learnt information verbally. Last of all is the academic difficulty where the student has difficulty in motor comprehension and mathematical skills as well as the learning memory gap.

There are 8 common disorders and most can be diagnosed in the classroom. I will briefly mention each one with its given symptoms. First and most common disorder is SID or Sensory Integration Dysfunction.

Students with this disorder have trouble taking in information through their senses. This is the major reason for: hyperactivity, inattention, movement in class, learning and behavioral difficulties, etc.. The way to deal with this disorder in class is to keep the class tidy and clean as well as remove loud noises and bright lights. Also you can lessen the colors and distracting objects found in the classroom. ADHD is our second disorder in this list. It is commonly misdiagnosed as Bipolar disorder or OCD because the symptoms are very

similar. These symptoms include: Short attention span, weak impulse control, hyperactivity. This disorder is found in males more than in females and the cause is neuro-developmental. There are many ways a teacher can deal with ADHD students. These children tend to find difficulty in being organized and they are extremely fidgety. Some ways to deal with the disorganization is to prepare a checklist for all students to use. They can tick off all their objectives when they’ve completed them thus staying organized and making it a habit.

The next disorder is ODD or Oppositional Defiant Disorder where the child is extremely uncooperative and hostile. He/she will tend to throw tantrums when asked to do something they do not wish to do. This type of disorder is easy to deal with. Recognition and earshot or indirect praise will help boost the self esteem of a child and condition them to behave well. As mentioned before, bipolar disorder is often misdiagnosed as ADHD or depression or even OCD since the symptoms of these disorders are very similar but with minor variations that lead to major difference in diagnosis.

Getting to know “Student X” on a personal basis is the biggest step toward helping this child fit in to the class and dealing with this disorder as simply as possible. Getting to know the child forms a certain bond of trust allowing the teacher to control the mood swing and abrupt behavior as much as possible. Learning disabilities (LD) are a wide range of disorders that affect the learning process of a student. The most widespread of all LDs is dyslexia which is where the student has difficulty processing language.

Other examples of LD are dyscalculia, dyspraxia, and dysgraphia. These students are usually visual learners meaning they are better taught when using objects and graphic diagrams etc… The last 2 disorders I will be discussing are ASD (Autistic Spectrum Disorder) and FASD (Fetal Alcohol Spectrum Disorder). The first refers to the disorder where children show delay in communication and socialization skills, impaired social development, and repetitive behavior. One of the most famous autistic adults is Dr. Temple Grandin.

He has been on television on shows such as the Today Show and Larry King Live as well as The New York Times and Forbes magazines. Children with autism no matter what the severity respond well to decrease in sensory load. FASD is a disorder that can very simply be avoided. Cause: Alcohol consumption or smoking during pregnancy. Solution: No alcohol or smoking during pregnancy. Symptoms are widely ranged and each person behaves differently. Two people diagnosed with the same disorder may react in two very different ways depending on their personality.

After having discussed all the above, I have been asked to give my input on the matter. Of everything stated in this presentation I had a vague idea of almost all the common disorders related to NBB but now I have learned how to recognize them while in a classroom as well as earned how to deal with students in such cases. The thing that caught my attention most was how to deal with such students while teaching an inclusive class. Methods may vary but the most important of all methods is the sensory balance and the “talk less” routine.

I, myself, have encountered students with mild ADHD and moderate to extreme OCD both of which are common disorders that tend to hinder leaning experience. Both of these students were my friends. Student 1(ADHD) could not focus on an exam if a typo was found. In addition to his mild color blindness which amplified his ADHD because it would distract him from the main purpose of a question. Student 2: (OCD) This person had a severe case of OCD. He was admitted into therapy and started on anti-anxiety pills because of this disorder.

He has the tendency to fidget and cannot stay in one place for too long which can explain on its own how it can stand in the way of his learning experience. In my opinion, teachers should be trained in recognizing and dealing with these students and their atypical behavior in ways that will least disturb the process of learning. Also, students diagnosed later on with SEVERE cases of NBB should be separated from the class and given the just attention needed. In other cases, the right amount of training could help a teacher successfully lead an inclusive class, or a shadow teacher could be assigned to students who need it. 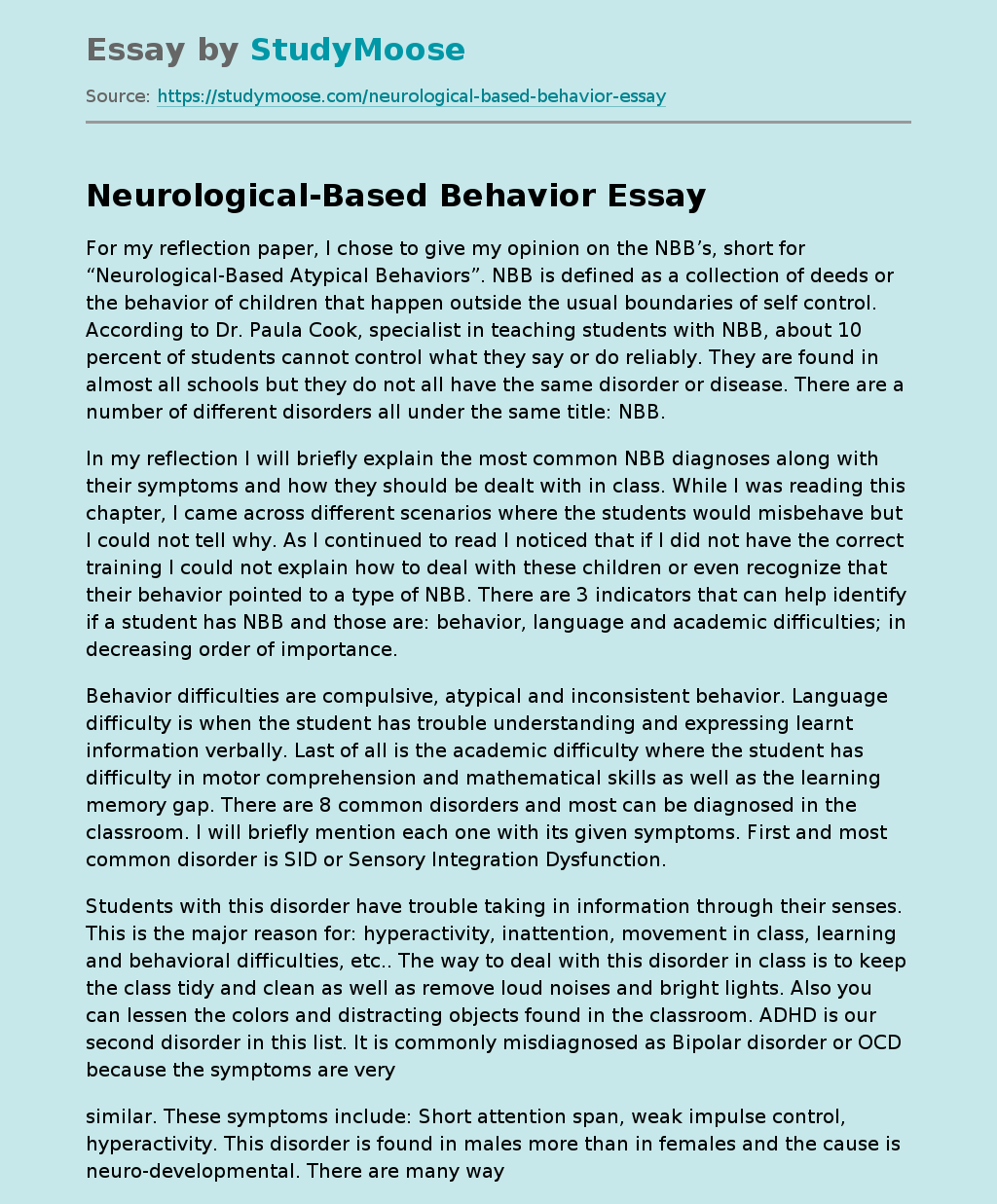