Claim: Negative effects of video games and results of overuse leading to many side effects

A. Opposing view: Video games may help children in following instructions, problem solving and logic Source: Raise Smart Kid. (2014). The positive and negative effects of video games. B. Refute: Children playing aggressive video games tend to have aggression programmed in their minds Counter-argument: Violent and aggressive video games users may connect violence to entertainment and pursue it as a solution in reality Source: Layton, J.

Don't use plagiarized sources. Get your custom essay on
“ Negative effects of video games ”
Get custom paper
NEW! smart matching with writer

II. Major idea: Fierce incidents are happening with children and teenagers and adolescence who have been proved to be putting a lot of hours playing video games affect. A. Opposing view: Not all incidents are connected to video games which means video games are not the sole contributor violence Source: LiveScience.com. (2014). Video games not to blame for violence.

III. Major idea: Video games are bad capable of confusing reality and fantasy for the user A.

Humans are constantly on the pursuit of happiness, we have a habit of fulfilling this happiness with entertainment. People will do basically anything to satisfy this need, if its television, the internet or any kind of gaming, we will do it to entertain ourselves.

However these come with consequences that may alter our life. While technology is evolving more and more video games are becoming more complicated, violent, and very realistic its are bad for you. Teens are caught in the middle of these new generation violent games which tend to influence them one way or another. Video games stand as natural educators; they provide a lot of practice and have rewards for success in the required action, meaning violent games include a lot of killing and being rewarded for it. These days it is hard to find a game that doesn’t contain violence, aggression or bad language. So overuse of video games is leading to mild and serious negative effects in children and adolescence.

Addiction to video games really contributes to unhealthy activities. Bit by bit the gamer will stop putting hours into exercising and taking care of his priorities at his age and indulge in more and more gaming. (As cited in “The Harmful Effects of Video Games on Children”. “According to CDC (Centers for Disease Control and Prevention), obesity rates for adults have doubled and the rates for children have tripled since 1980. Although we must admit that we cannot blame this fact on video games alone, however it isn’t just a coincidence that these rates are during the same years the market for video games began to boom”. Not to mention video-induced seizures; which are relatively common in children with past experiences with this condition. Additionally, although not as major, postural disorders may happen from all the time put into gaming, which turn into a problem into that persons future.

Our brain is like clay; we mold it and evolve it by the stimulus we give it. So if we expose our brains to constant fantasy, role-playing, and game violence it will definitely be embedded in the way we see the outside world. Today’s video gamers are so instilled in their games that they may even mistake fantasy with reality and vice versa. (As cited in John Walker’s ‘Fantasy and Reality: Can Gamers Tell?’) “Repeating a task many times in a game means your brain flickers on the idea of doing it in real life”. In my experience, I have seen many of friends get so attached and obsessive about a game that everything they talk about is connected to it. Adventure games that have many cut scenes and events happening have a habit of blurring out the users mind and making him/her eager to finish it as soon as possible. When I play a new game on my PlayStation I get so excited that I spend hours and hours without budging from my place, I obsess about it and it becomes all I think about in reality. As a person gets addicted and plays hours consecutively he/she will eventually skip anything that comes their way to play another hour, it may lead to sleep deprivation Sleep deprivation is a serious problem since almost anything we do in our lives requires a certain amount of concentration.

Without concentration, the simplest achievements could turn into a complicated situation. Children and adolescence will start falling back in their school work, missing deadlines, and might even end up failing a certain subject. A decline in school achievements is inevitable since the main focus of the child is now their favorite video game. Author Andrea Norcia stated in her article (as cited in Parents and Teachers: The Impact of Video Games) ‘students who play excessive video games are more likely to be more aggressive, more prone to confrontation with their teachers and may engage fights with their peers. Although some scientific tests done on gamers suggesting and enhancement in cognitive abilities and the capability to concentrate, other studies showed that games are harmful to the mind, can help children’s attention issues and damage long term concentration spans.

Violence is the main theme of many video games if not most, if you succeed in killing perfectly you will eventually receive awards and in the end finishing the game wanting so much more. Teens averaging 13 hours per week of continuous video games are really expected to display many aggressive behaviors. Game designers might or might not intend these large effects but both ways the children are caught in between. Basically violent games demonstrate aggressive behavior on repeat; humans tend to take in information clearer in a repetitive and continuous lesson. It’s not a surprise youths exhibit more aggressive behaviors and attitudes. Decrease in empathy for victims lead to a higher possibility of people to become more violent individuals. Aggressive delinquency is very common among students who play intense video games since authority is absent in video games, meaning a player is not punished for his action as in real life. Several incidents that were reported in the United States have been linked one way or another with the overuse of video games effecting teen’s minds.

As Julia Layton specified in her article, “On April 20, 1999, two seniors walked into their Colorado high school carrying assault rifles, and they opened fire. They shot dozens of people, killing 12 students and one teacher, and the nation was floored. School shootings had happened before, but this was a new scope of carnage, and in the ensuing search for answers it came out the shooters had spent a lot of time playing violent video games.” (As cited in ‘Do Violent Video Games Lead to Real Violence?’). These incidents are the fatal ones, ones that hit from nowhere and cause great damage, and it is this problem that leads us to dig more and more about what these aggressive and violent games are doing to young minds. The miracle and importance of
life is now taken for granted thanks to games which render the idea of someone losing his/her life and making a fun and entertaining storyline filled with aggression and gore. Video game users are more likely to feature hostile and aggressive behavior to others, exhibiting actions such as bullying, gender and other kinds of stereotyping, and reduction of understanding others. While not all incidents of violence are directly connected to video games, it is definitely worth taking a way one factor of violence and especially this factor since it starts so soon in children and teens. The disruption of the mind of players is numerous. Some video games teach the wrong values and undermine the worth of a person’s life being taken; which consequently takes a toll on teens and give them tenancies to deal aggressively in minor conflicts.

Conclusion
To conclude, video games have had a reputation of negative effects such as obesity, lack of social skills, addiction, aggressive and violent behavior, sleep deprivation, increase in possibility of hurting others, confusion between reality and fantasy, decline in academic achievements, and picking up bad language. To enhance the positive effects of video games while reducing the negative effects, we must limit the hours we play, and also take good care in choosing the right games for the right age groups. The content of the game is the major issue. 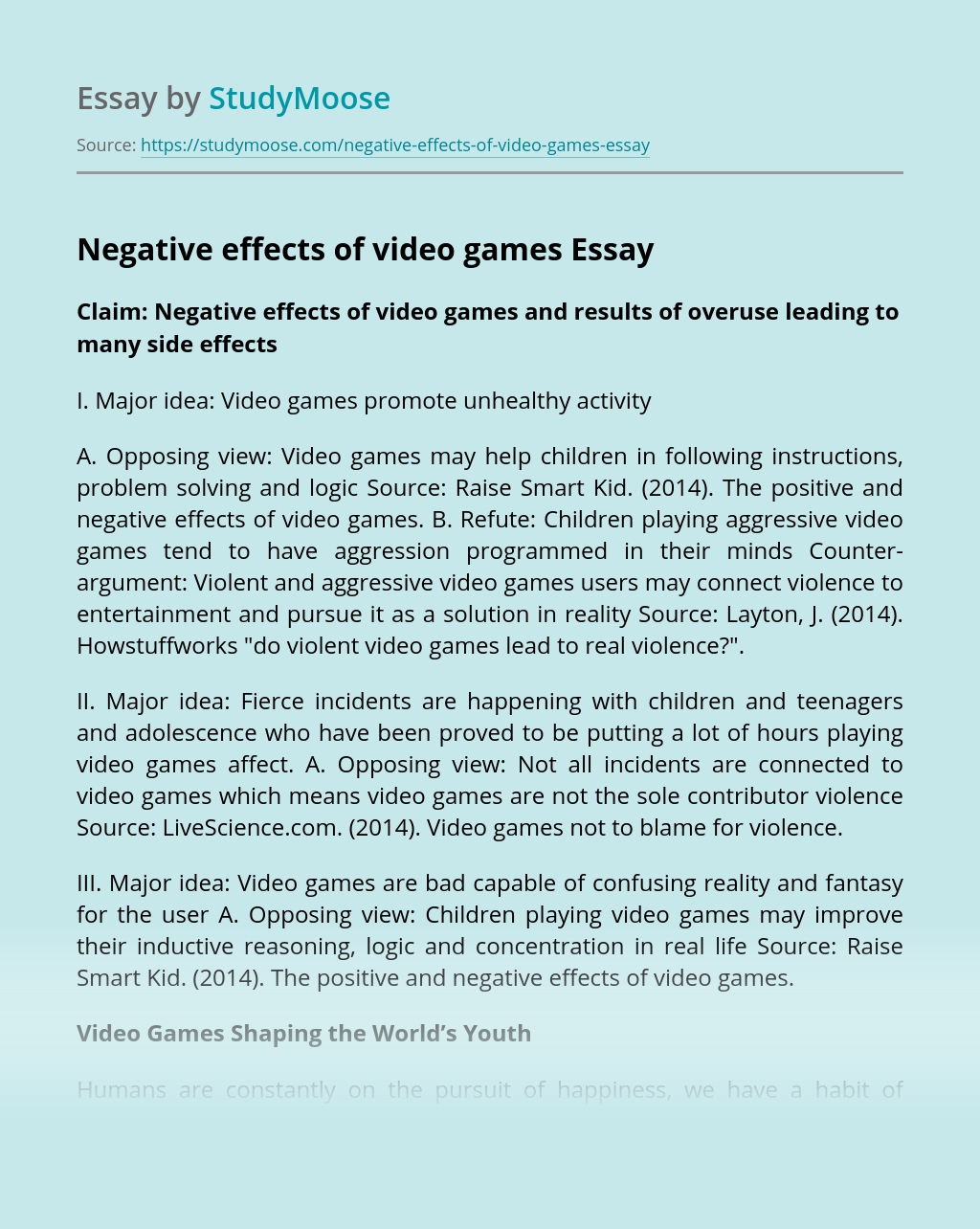