Last September 3, 2010 I started my on-the-job-training program at The Medical City in Ortigas. I was assigned at the Admitting Department where all incoming patients are entertained and admitted. It is where the patients usually go whenever they need to transfer rooms. It is also where the incoming patients call if they need to reserve rooms for their admission. The Admitting Department also serves a call center for the entire hospital. As a trainee or an intern, I also have lots of duties or responsibilities to do at my said department.

Don't use plagiarized sources.
Get Your Custom Essay on Narrative Report Just from $13,9/Page

Those duties or responsibilities are as follows: first, I handle incoming calls from patients, doctors, and other personnel from inside the hospital. My supervisor also assigned at their call center where I experienced answering calls from outside the hospital which is a difficult task to do because I have to know all the local numbers of the different departments of the hospital so that I can transfer the calls properly and that I will not get any complains.

Second, is that my supervisor asked me to entertain patients who came in for the first time and I asked them to fill out a Patient Information Sheet so that they can be admitted properly. My third duty or responsibility is to file. My supervisor asked me to file and to arrange her filing cabinet alphabetically. I have experienced to file all the necessary information, confidential data, telephone bills, gasoline consumptions, etc. Fourth, is to encode the number of patients who are admitted on a certain unit at the hospital (i. e. ICU, Ward, and Telemetry Unit).

Fifth, is to record the names of the patients on a logbook and after I recorded the names of the patients, I will go to the Billing Section to give them the logbook so that they will put it on their database. My sixth duty or responsibility is to compute the total number of barcodes used by patients on a certain unit for a whole month. It was a hard thing to do because I really have to make sure that I computed it properly so that there will not be any problems regarding that matter. Seventh, is to check the number of patients who are discharged on a certain day, and to also encode it as well.

Eight, is to do what they call “Turnaround Time for Actual Room Occupancy” on their database. What I do with it is that I find the patient who is in the records and I check if their time of admission is correct. Ninth, is to count all the number of incoming calls that the Admitting Department received for the whole week. Tenth, is to check the list of names of all of the accredited doctors of a certain health card are all correct and complete so that they will know if the said doctor of their patient is correct.

And lastly are to print all of the needed files like for example the Philhealth records that are needed for their annual audit. Those Philhealth records took a very long time for me to finish because it contained a lot of pages in every single day of the month. During my training period, I also encountered problems like any other trainee would have. On my first day of my training period, I was a bit shy at first to talk to my co-workers because I was new and I don’t know them all, but as time passed by I found out that they are all good people and that they are not snobbish after all.

In fact, they are all funny and great to be with. When it comes to dealing with patients or with visitors, I find it hard to talk to them at first especially if the patient you encountered is hardheaded because they are the ones who are very demanding when it comes to the type of the rooms that they want, and that they don’t listen that much to what you are explaining to them. Those patients are what my co-workers often call “Toxic” because they are very hard to deal with and that sometimes they can be very annoying.

I also encountered problems in answering telephone calls especially when I was assigned at the call center where I have to memorize all the local numbers of the departments in the hospital, and the calls are non-stop. While doing my on-the-job-training program I have learned to deal with people who I am not used to be with every single day. I have learned to be confident when answering calls, and when talking to a patient. I also learned that it is not really that embarrassing to ask your co-worker if you did not fully understood what your supervisor had told you to do.

I also learned not to be shy to ask what to do whenever I already finished what I was asked to do. And I also learned how to communicate well with other people especially with my co-workers. While my training progressed, I have learned so many things, not just on this field of work, but also in life. I have learned to be confident in dealing with other people. I also gained new friends. I have learned that my co-workers are not so hard to relate to even if they are way older than me. They are really great to talk to. They are all good listeners and they often give me advises not just in work, but also advises in life.

I did not realize that I already spent a month in that department and that my training program is coming to an end. It is like I don’t want my training program to end even though my supervisor always gave me a lot of work, and that I always come home late because I always do an overtime so that I will be able to finish the hours needed to finish my training program, but it was all worth it. I am now already looking forward for my next on-the-job-training. I hope that I can do my training at the Admitting Department of The Medical City next time. I really had a blast even if some days are very tiring. So, this ends my narrative report! 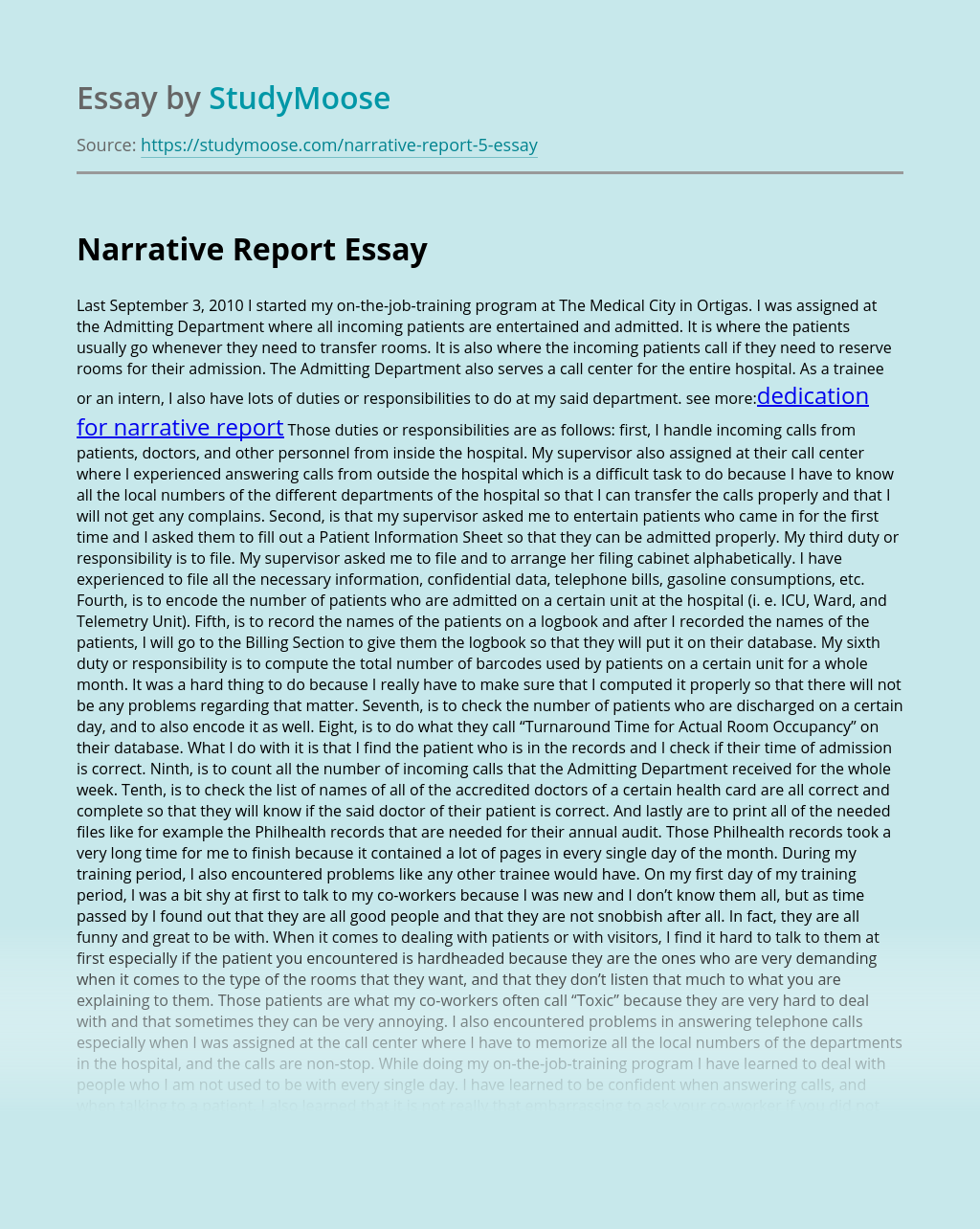 The Influence Of Religion On Political Participation Politics

This research paper explorer the effects of religious belief and religious involvement of communities on political participation especially in the United States. It takes a closer look into variations among different ethnic communities in relation to political participation. This is because ethnicity is a significant factor in determining the religious affiliations of different ethnic groups.... VIEW ESSAY

Kathak is the classical dance of north indian style that was characterized by rhythmic footwork danced under the weight of more than 100 ankle bells, spectacular spins, and a representation of themes from Persian and Urdu poetry alongside those of Hindu mythology. The word kathak means “to tell a story”. It is derived from the... VIEW ESSAY

The scope of this essay will discuss the political legacy of colonisation and western cultures influence in colonial territories in relations to the extinction of indigenous cultural practices. The essay will be used to evaluate colonialism in terms of political economic, the impact of colonialism on indigenous people which is widely considered as one of... VIEW ESSAY

Big Skinny wallets are water resistant and tough enough to machine-wash regularly. k. “Thinnest Wallet Ever” great marketing scheme 13. Core Weaknesses l. They won’t appeal to luxury customers because they are made of nylon instead of leather which is seen as a luxury material people may not be inclined to invest in a wallet... VIEW ESSAY