Napoleon And The Enlightenment

The enlightenment was a time of great learning throughout Europe during the eighteenth century. Although the period is significant for scientific and other scholastic advancements, it is most important because it allowed for the opening of great minds–such as that of Napoleon Bonaparte. Shortly after this enlightenment made its way through Europe, revolution and civil war ripped through France between 1879 and 1899. The unrest of the time called for a strong ruler. A man/woman with an open mind and an enlightened soul.

Don't use plagiarized sources. Get your custom essay on
“ Napoleon And The Enlightenment ”
Get custom paper
NEW! smart matching with writer

France needed a child of the enlightenment to sew its tattered flag. Napoleon Bonaparte was a child of the enlightenment. This was displayed in both his attitudes and policies as a result of enlightened religious ideas, political genius, and social reforms. Almost every ruler in history can be accused of having some kind of religious fanaticism. This religious fervor has led to persecution, civil war, unrest, instability, ignorance, and even genocide. The enlightenment taught philosophes and scholars religious tolerance by lessening the importance of religion and God in everyday life.

As a child of the enlightenment, Napoleon had a similar immunization to the devout and was able to use religion as a tool to accomplish his political ideas and goals. An example of this is the fact that whatever new land he conquered, he adopted the religion of that land in order to gain the acceptance of the general population. In France, he was Catholic. In Egypt, he was Muslim. But the only insight we have to his actual religious beliefs are that he said he followed his own star indicating that he pursued a somewhat mystical belief in destiny and fate.

He completely regarded the church as a convenience to be taken advantage of by any enlightened despot. When he first came to power, the greatest force that could propel counterrevolution was the Catholic church, so ignoring the infuriated (and politically weak) Jacobeans, he signed a concordat with the Vatican. He said, Fifty . . . bishops paid by England lead the French clergy today. Their influence must be destroyed. For this we need the authority of the Pope. Through the concordat, the Catholic church was able to gain back authority that it had lost during the revolution, however, it was never allowed to recover its former autonomy or power.

Napoleon kept the French church in his pocket. He paid the clergy directly, and he made them financially dependent on his treasury. As a child of the enlightenment, Napoleon used cold authority and calculation to wield one of the most powerful weapons in the world–religion–and he did it successfully. It is hard to reconcile whether it was Napoleon’s political genius that made him enlightened or whether it was his enlightenment that made him a political genius. Regardless, he will always be recognized as a charismatic and remarkable enlightened despot. Everyone who encountered Napoleon Bonaparte were immediately impressed by his amazing wit and blunt intelligence. As a military figure he is unmatched and as a leader, he has been mimicked throughout history by other rulers hoping to eclipse his success. The element of Napoleon’s character that made him enigmatic to France at this time, however, was not eloquence or dazzle but crisp speech filled with reason and calm assurance. He was, in a nutshell, exactly what France wanted after fifteen years of political upheaval.

After coming to power, Napoleon immediately set up a pretend constitution and parliament, but he ruled with an iron fist. As far as voting was concerned, the population could accept his policies or not vote at all. (women, of course, could not vote no matter what) Though by today’s standards Napoleon may seem ignorant and unenlightened, during the 18th century an enlightened despot was an absolute ruler who was able to introduce rational reform and thought without considering the needs of the minority. As an example of this kind of enlightenment, Napoleon began to tax the upper classes. By taxing the nobility, Napoleon was taxing the richest two percent of the population that the former monarchy would not tax because they could yell the loudest. The former monarch was dead. The former monarch had been killed by that nasty ninety-eight percent in a very unpleasant way. Napoleon’s next step was to codify laws. For a child of the enlightenment, the codification of laws is definitely a requirement. But Napoleon did not only make law codes, he made law codes that surpassed the fame and glory of Roman law codes.

Yes, Napoleon was a child of the enlightenment; this is clearly displayed by his policies and law codification that directly impacted the majority. Napoleons enlightened social reforms were often directly impacted by his religious agreements and political endeavors. The most interestingly enlightened social reform that Napoleon instituted was a law system that fell on the shoulders of every individual equally. There was no recognition of social class in law. Military positions could no longer be bought or sold. A person was expected to make their way up in society on their own two feet, not riding the backs of their parents piggy-banks. Education became increasingly important because under this system, pedigree was dog food. Thus, the next most interesting enlightened social reform was a public system that has remained almost exactly as structured and rational today, as Napoleon himself instituted it nearly two-hundred years ago. Though the upper classes mainly benefited from them, scholarships were provided for youths who showed scholastic promise. (Of course this, once again, excludes girls–who by the way are good for nothing but breeding and prostitution)

Yes, Napoleon did tamp down on any promise of a feminist movement that had glimmered during the French revolution. But this is expected from a male enlightened despot. A feminist movement could be almost as destructive as the church if properly instituted. One simply needs to peruse Aristophones’ Lysistrata for proof of that. So, by putting women back in their rightful and passive places and instituting social reform for the greater male population, Napoleon once again capitalizes on his enlightened mentality and proves that their is no grander child of the enlightenment than he. Napoleon instituted reforms in religion, policy, and society that clearly reflected an enlightened upbringing. Though these sentiment may seem slightly arrogant and assumed, Napoleon himself would have been happy to explain his enlightened magnificence if he weren’t dead. Has it been mentioned that he was short? (the writer could not help herself) Napoleon is a timeless example of an enlightened despot.

The bible still has not fully recovered from the rationality of his church. His codified law system is still active in France and the great state of Louisiana. Mankind today clutches desperately at his social ideologies. Though a modern thinker may say the only thing that keeps Napoleon from being enlightened is lack of democracy, the writer sitting in this chair thinks that the only thing that keeps democracy from being Napoleon is enlightenment. Had Napoleon been born merely fifty years earlier he may have been a trendsetter of the enlightenment. Or he might have been a fisherman. Regardless, Napoleon was a child of the enlightenment and not a parent. He followed the ideas presented by that period with such strategy and genius, people are still writing papers about it. (By choice?)

Napoleon And The Enlightenment. (2016, Jun 22). Retrieved from https://studymoose.com/napoleon-and-the-enlightenment-essay 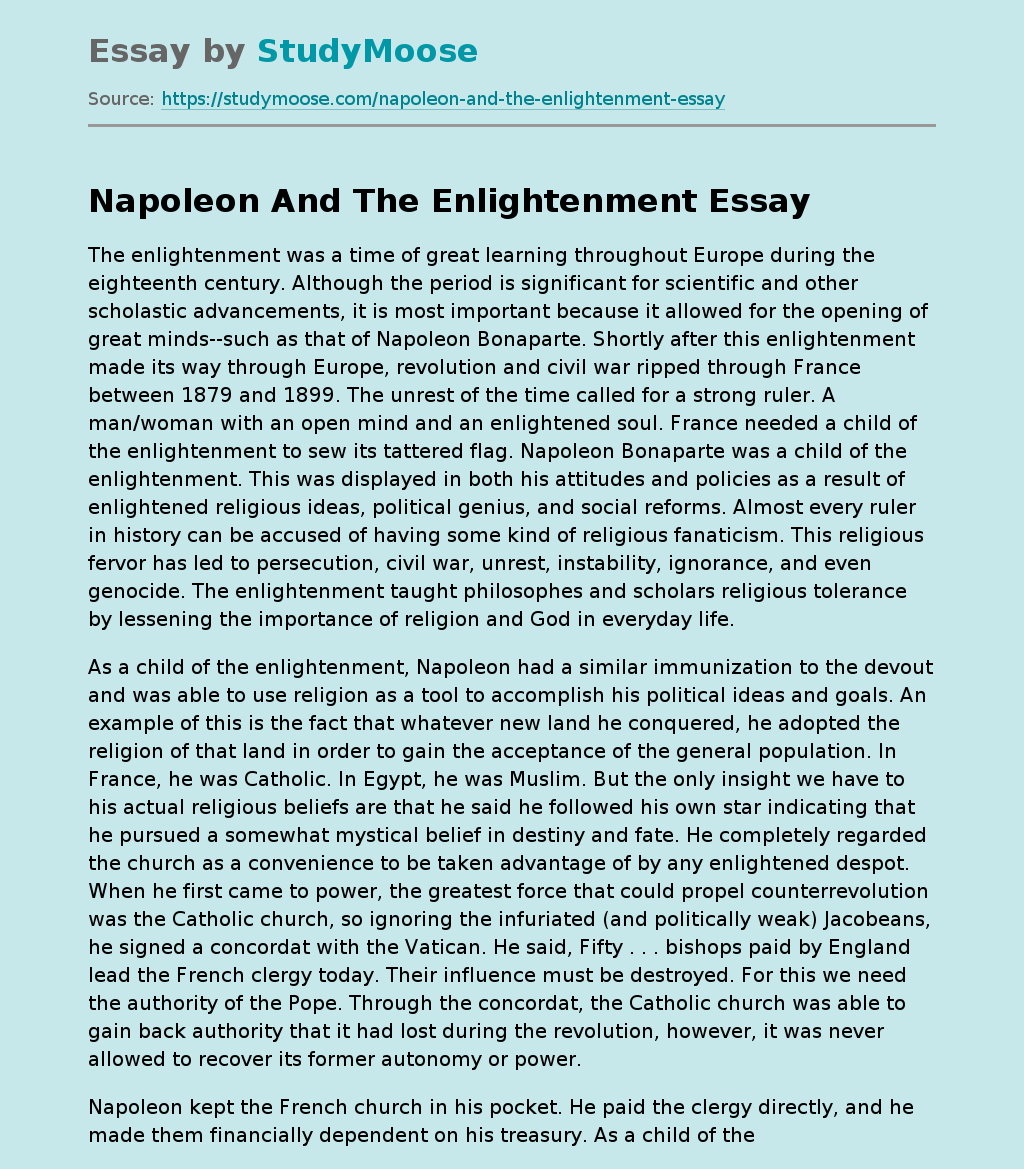