Myocardial infarction is the technical name for a heart attack. A heart attack occurs when an artery leading to the heart becomes completely blocked and the heart does not get enough blood or oxygen, causing cells in that area of the heart to die (called an infarct). Most heart attacks are caused by blood clots, which are in turn caused by atherosclerosis (stiffening and narrowing of the arteries). High blood fats (triglycerides) and LDL or “bad” cholesterol form plaque inside arteries, narrowing the passageway and reducing the amount of blood that can flow through.

A person’s lifestyle plays a crucial role in preventing a heart attack or recovering from one. Eating a heart healthy diet and getting at least 30 minutes of exercise 5 days a week (or more) can greatly reduce the risk of heart attack.

Heart attacks happen when an artery supplying your heart with blood becomes blocked. Without blood, the heart doe not get enough oxygen and cells in the heart start to die.

The most common cause of blocked arteries is atherosclerosis. No one knows the exact cause of atherosclerosis, but most researchers believe it begins with an injury to the innermost layer of the artery, known as the endothelium. The following factors are thought to contribute to the damage: High blood pressure

Over time, fats, cholesterol, and other substances also build up at the site, which thickens and hardens the artery wall. The amount of blood that flows through the artery is decreased, and oxygen supply to organs also decreases. Blood clots may also form, blocking the artery. Rarely, a spasm in a coronary artery (one that supplies blood to the heart) stops blood flow and can cause a heart attack.

Usually, the most recognizable symptom of a heart attack is pain in the middle of the chest that may spread to the back, jaw, or left arm. Less often, the pain spreads to the right arm. The pain may occur in one or more of these places and not in the chest at all. The pain of a heart attack is similar to the pain of angina but is generally more severe, lasts longer, and is not relieved by rest or nitroglycerin less often, pain is felt in the abdomen, where it may be mistaken for indigestion, especially because belching may bring partial or temporary relief. For unknown reasons, women often have different, less identifiable symptoms. About one third of people who have a heart attack do not have chest pain. Such people are more likely to be women, people who are not white, those who are older than 75, those who have heart failure or diabetes, and those who have had a stroke.

Other symptoms include a feeling of faintness or actually fainting, sudden heavy sweating, nausea, shortness of breath, and a heavy pounding of the heart (palpitations). During a heart attack, a person may become restless, sweaty, and anxious and may experience a sense of impending doom. The lips, hands, or feet may turn slightly blue. Older people may have unusual symptoms. In many, the most obvious symptom is breathlessness. Symptoms may resemble those of a stomach upset or a stroke. Older people may become disoriented. Nonetheless, about two thirds of older people have chest pain, as do younger people. Older people, especially women, often take longer than younger people to admit they are ill or to seek medical help. Despite all the possible symptoms, as many as one of five people who have a heart attack have only mild symptoms or none at all. Such a silent heart attack may be recognized only when ECG is routinely done some time afterward. During the early hours of a heart attack, heart murmurs and other abnormal heart sounds may be heard through a stethoscope.

Treating a heart attack quickly can save life, while delay can be fatal. In the emergency room, a doctor will ask about signs and symptoms and perform a physical examination. The doctor will immediately run tests to determine the heart functioning. They may include: Electrocardiogram (ECG) — the first test done to check for a heart attack. Electrocardiogram (ECG) measures electrical activity of your heart. Blood tests — The doctor may look for certain enzymes that are released into the blood stream.

Myocardial infarction can be reduce by:
Stopping smoking.
Getting aerobic exercise (such as walking, biking, or swimming) for at least 30 minutes per day to reduce the chance of getting heart attack. Reducing stress and learning stress-reduction techniques such as deep breathing and
meditation. Yoga and tai chi — two forms of exercise that emphasize stretching, breathing, and meditating — can also help to reduce stress level. Eating a diet low in saturated fat and rich in fruits, vegetables, and whole grains. Losing weight or maintaining a proper weight.

The goal when treating a heart attack is to restore blood flow to the affected area of the heart immediately, to preserve as much heart muscle and heart function as possible. If the doctor prescribed nitroglycerin, take it while waiting for emergency medical personnel to arrive. Once at the hospital, the doctor may use drug therapy, angioplasty (using one of several methods to clear the blocked blood vessel, such as inflating a balloon inside it or holding it open with a device called a stent), and surgery. Taking medications as prescribed are very important for avoiding recurrent heart attacks and even death. Although certain herbal remedies as well as relaxation techniques may also be used, they should never be used alone to treat a heart attack. A heart attack always requires emergency medical attention.

Myocardial infarction (MI) is the medical term for an event commonly known as a heart attack. It happens when blood stops flowing properly to part of the heart and the heart muscle is injured due to not receiving enough oxygen. Usually this is because one of the coronary arteries that supplies blood to the heart develops a blockage due to an unstable buildup of white blood cells, cholesterol and fat. The event is called “acute” if it is sudden and serious. Important risk factors are previous cardiovascular disease, old age, tobacco smoking, high blood levels of certain lipids (low-density lipoprotein cholesterol, triglycerides) and low levels of high density lipoprotein (HDL) cholesterol, diabetes, high blood pressure, lack of physical activity, obesity, chronic kidney disease, excessive alcohol consumption, and the use of cocaine and amphetamines. The main way to determine if a person has had a myocardial infarction are electrocardiograms (ECGs) that trace the electrical signals in the heart and testing the blood for substances associated with damage to the heart muscle. Common blood tests are troponin and creatine kinase (CK-MB). ECG testing is used to differentiate between two types of myocardial infarctions based on the shape of the tracing.

After a heart attack, a person’s prognosis depends on how damaged the heart is. If the person is alive 2 hours after an attack, he or she has a good chance for survival, but may experience complications such as: Irregular heart rhythm, called an arrhythmia

Heart failure
Shock
Infarct extension (extension of the amount of affected heart tissue) or recurrent heart attack(s) Pericarditis (infection around the lining of the heart)
Pulmonary embolism (blood clot in the lungs)
Complications from treatment (for example, thrombolytic agents increases the risk of bleeding) The good news, however, is that heart attacks are not always disabling, especially when there are no complications. In fact, a full recovery is possible that allows you to do all the things you used to do, including sexual activity. Going through cardiac rehabilitation and sticking with lifestyle changes can help lead to a positive recovery. 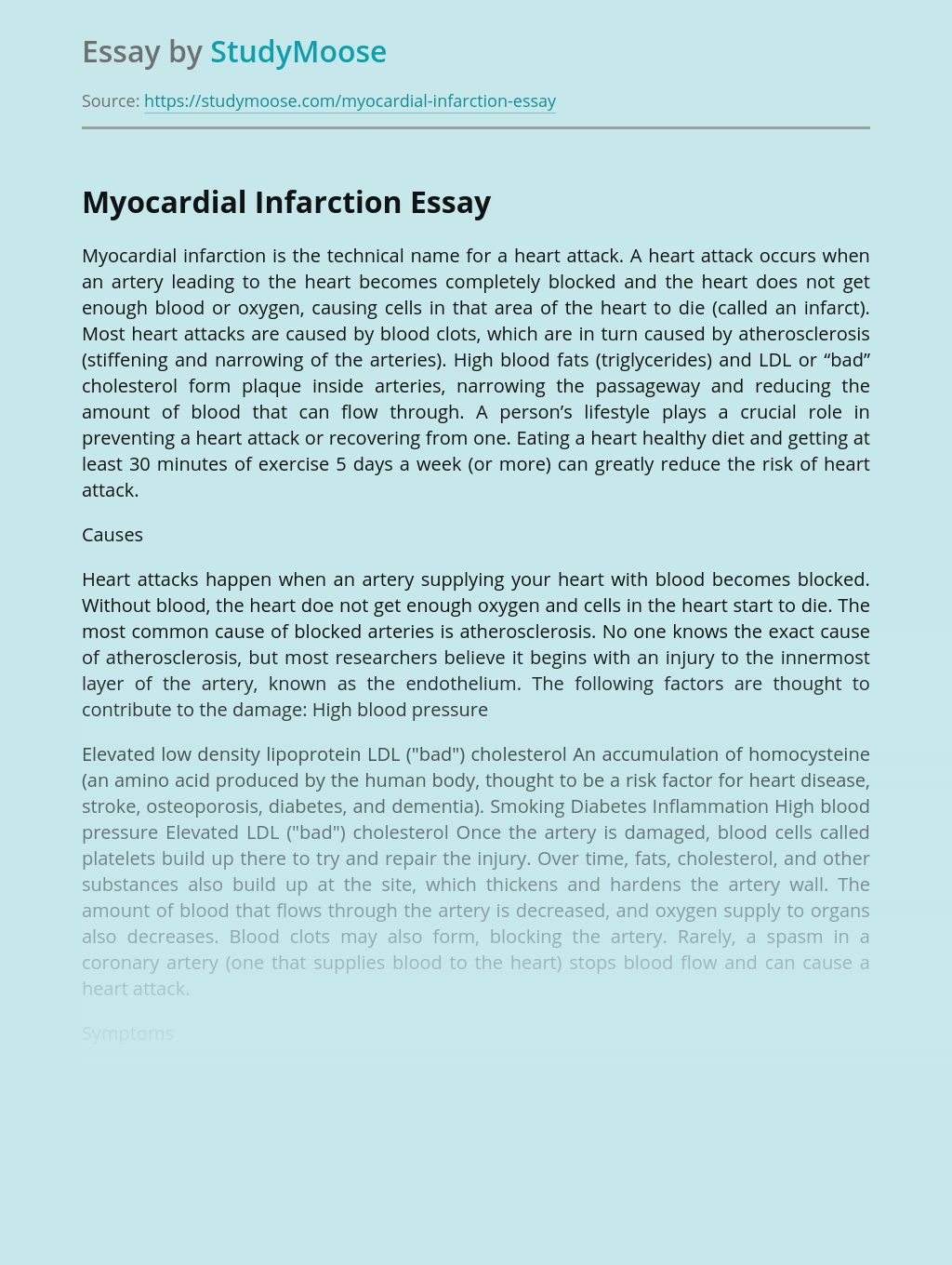