My Reaction Paper About the Movie: the King's Speech

My Reaction Paper about the Movie “The King’s Speech”

Tom Hooper’s film “The King’s Speech” demonstrates the vital importance of the human voice in establishing and maintaining power. If you can’t get the words out then you will never assert authority. This moving film is about King George VI and his attempts to deal with a stammer. This charmingly modest film explores an entirely different kind of courage than the quality that’s always seen on action movies or war.

Don't use plagiarized sources. Get your custom essay on
“ My Reaction Paper About the Movie: the King’s Speech ”
Get custom paper
NEW! smart matching with writer

It’s not about climbing mountains or destroying the enemy’s territory; it’s about breaking emotional barriers and b. The most evoking scene in “The King’s Speech” comes when Bertie, the painfully shy, tongue-tied second son of George V, arrives unannounced at his poor speech therapist’s home and begins to unburden himself for the first time.

The scene that follows is a depiction of the kind of breakthrough childhood moments I’ve been privileged to witness as a student.

Bertie comes across a half-finished model airplane one of Lionel’s sons was working on when he arrived. Commenting ruefully that as a royal child he was never allowed to make models, Lionel encourages him to paint glue on the struts. Brush and model in hand, the future king — finally freed to be the child he wasn’t allowed to be — begins for the first time to tell his therapist where he’s hurting. We begin to get a portrait of the haunting memories of Bertie’s childhood: The nanny who preferred the older brother, tutors who forced the left-handed child to use his right hand, painful metal braces to straighten his legs.

It’s a turning point in the film, as we begin to understand just how much courage it took to be him, as a child with a crippling stammer, and how much courage he would have to muster to rise to the occasion to lead the nation, as George VI, through World War II. It’s not the kind of courage that’s usually featured in action movies, it’s not the guts to do something others can’t, but the guts to do something that’s easy for other people but is very difficult for you.

Therapists see countless kids overcome humiliation and fear other kids just don’t have to contend with. They see kids muster enormous energy to conquer their internal enemies, just as they watch Bertie push through his agony to become the king he wants to and needs to be. We suffer with Bertie as he fails dismally, mortifyingly, to deliver a greeting from the royal family to a hushed stadium full of waiting subjects. And we see him endure the rage of his royal father at his utter inability to read a message into a radio microphone. “Sit up! Straight back!” George V shouts at his grown son. “Face boldly up to the bloody thing and stare it square in the eye as would any decent Englishman! Show it who’s in command!” It’s very painful to watch, no less than it is to watch kids be teased and bullied because of their wrongness, imperfections, knowing that, while they appear weak to other children, they are in many ways tougher, stronger people than their tormentors.

That’s why we see many kids who overcome problems in childhood, like dyslexia, A.D.H.D., anxiety disorders, go on to accomplish extraordinary things. They have developed a tremendous courage. These are the things that inspire us in “The King’s Speech” and in the other people that have the same problems that we want to help. We know that Bertie is a better man and deserving king than his brother. And we know that every person, even a child or an adolescent who struggles to overcome obstacles others don’t face deserves not only our respect, but our help. Mental and learning disorders aren’t caused by weakness, but they can be overcome by strength.

My Reaction Paper About the Movie: the King's Speech. (2016, Mar 31). Retrieved from https://studymoose.com/my-reaction-paper-about-the-movie-the-kings-speech-essay 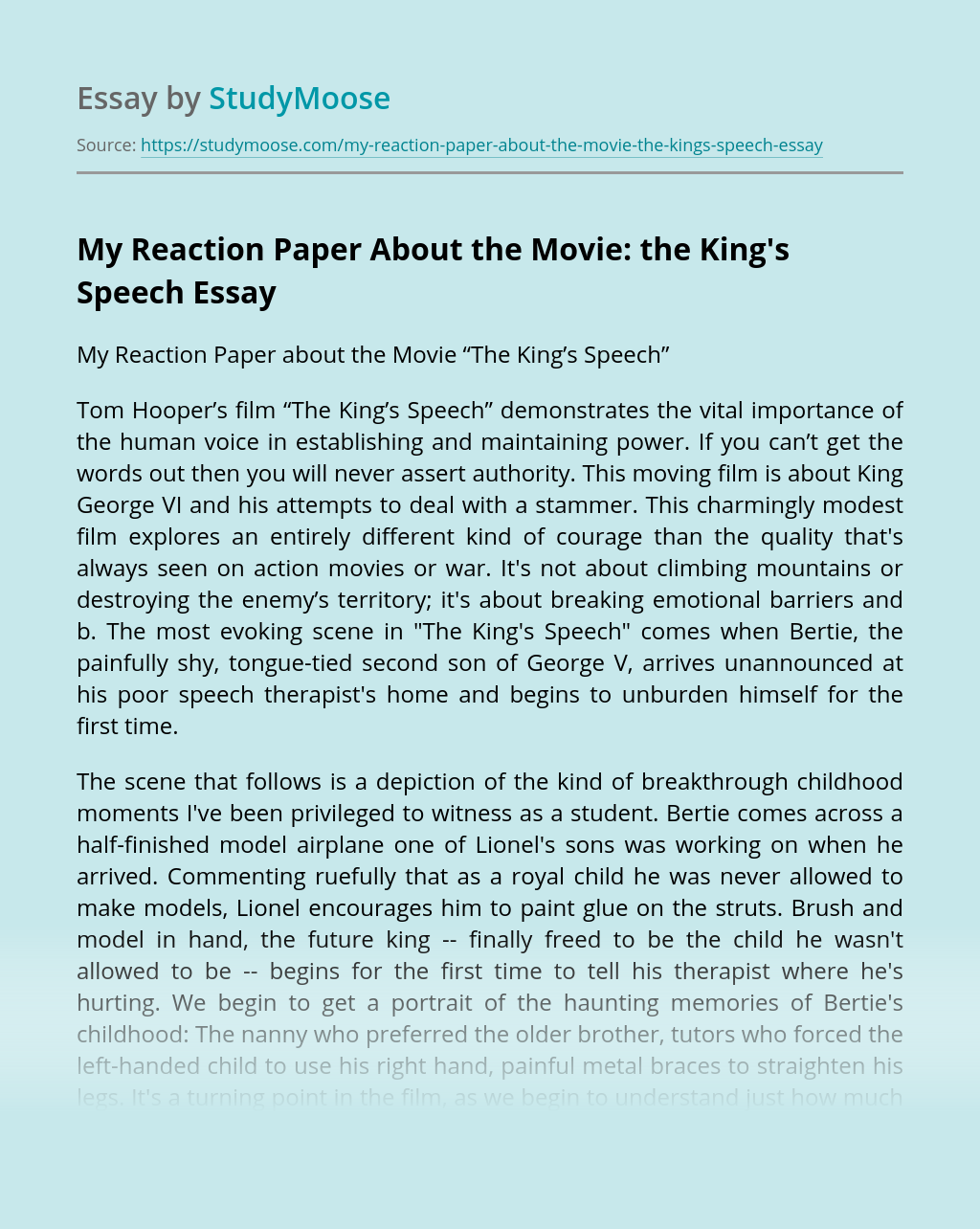