An Indian film - My name is Khan

My name is Khan is an Indian film that revolved around the life of Rizwan Khan, a Muslim who suffered Asperger’s Syndrome. Because of his problem in dealing with new places, people, loud colors and sharp sounds, he was given special care by his mother and private tutoring by a scholar which led to jealousy on part of his brother.

Khan was taught by his mother that there were only two kinds of people in this world- the good and the bad.

Don't use plagiarized sources. Get your custom essay on
“ An Indian film – My name is Khan ”
Get custom paper
NEW! smart matching with writer

After her mother died, Rizwan moved to San Francisco and lived with his brother and sister-in-law.

He was then employed by his brother as a sales man for Mehnaz Herbal Beauty Products. While working, he met and fell in love with Mandira, a divorced Hindu hairdresser who has a 6- year old son called Sam. After Khan showed a place that hasn’t been seen before by Mandira, they married and settle down in Banville even against the will of his brother. It was considered blasphemy, according to Rizwan’s brother, to marry a Hindu. Mandira and Sam took Rizwan’s surname. Everything seemed to be perfect for the family when the 9/11 attack happened in New York City and shattered the lives of the Khans.

The Khan family, as well as the other Muslims, began to experience discrimination, harassments and hate crimes from the American community. Mandira had to close her job; Rizvan’s sister-in-law was attacked for she was wearing a scarf; Sam experienced bullying and his best friend turned away from him.

He got into a fight with few school kids for they were blaming him as a terrorist and was beaten to death. Mandira blamed Rizwan’s surname for Sam’s tragic death. She banished him and told him not to return until he tells the U. S president that even though he is a Muslim, he is not a terrorist.

Conventionally, real man should be tough and should not show emotions. But seeing the film My Name is Khan, my heart of stone trembled and I caught myself teary-eyed. I was greatly impressed of Rizvan’s special ability to repair mechanical things particularly when the young Rizwan made an alternative pump to drive the water out from his teacher’s house and how he can repair almost everything. I was inspired by how Rizwan overcome his limitation as an autistic man in order to journey on across the different states of America just to meet the president of the USA.

I was saddened by how discrimination can tear a family apart; how it can bring damage to the oppressed party especially when discrimination is to be blamed for a death of a loved one. No matter what, Rizwan’s life brought happiness to us and proved that every cloud will always have its silver lining. Faithfulness is the one of the values I have learned in this movie. Rizvan’s strong faith to Allah never waived amidst the prejudice against Muslim by the American community. “Prayer should never depend upon the place or the people. It should depend upon your belief”, said Rizvan.

Second is respectfulness not only to the people, but also to one’s own religion. Mandira and Rizvan respect one another’s religion. They gave each other space to perform their own beliefs. Third is selflesness. Rizvan rushed to Georgia in the middle of hurricane to help Mama Jenny who once sheltered him. His act of kindness moved the world and brought volunteers to Georgia to aid the victims of the hurricane. Fourth is humility. Rizvan never failed to remain humble. When he was ill- treated in the airport, he did not complain. When he was released from being detained, he did not despise the people who imprisoned him.

When Mandira asked him to leave, he did not question. Instead he only asked when he can return. Lastly, Rizvan taught me the essence of love. It wasn’t anger or hatred that helped Rizvan succeed in his journey, it was his love for his family and of Allah. It was also love that helped Rizvan and Mandira moved on after the death of Sam. After watching the film, I can say that media took a big role in cultivating the minds of the people to look Muslims as a violent people and Islam as a violent religion using the issues concerning them like the 9/11 attack.

One statement from the media can greatly affect the perception of the people towards the issue. We tend to focus on the negative sides of the Muslim and discriminate them. What we don’t know is the brighter side of them, their irrevocable love for Allah and central practices that does not advocate violence and promote peace. Then what about the Muslim terrorists and their actions? For me, they did inhumane acts not for their religion but for their own selfish motives, not religiously but politically. But what happened was that media took blame on their religion and their teachings.

I can’t blame the media totally since this practice of blaming is even practice by our society and families. It became traditional that changing it will be difficult and will take a longer time. For example, someone commit a crime. Our society will not blame you totally but also your family, your background, and your religion. Moreover, My Name is Khan taught us that differences in religions cannot hinder two persons in love to have a successful marriage and peaceful living. We may have different names for our God, but all of them have one in common- they all symbolize love. 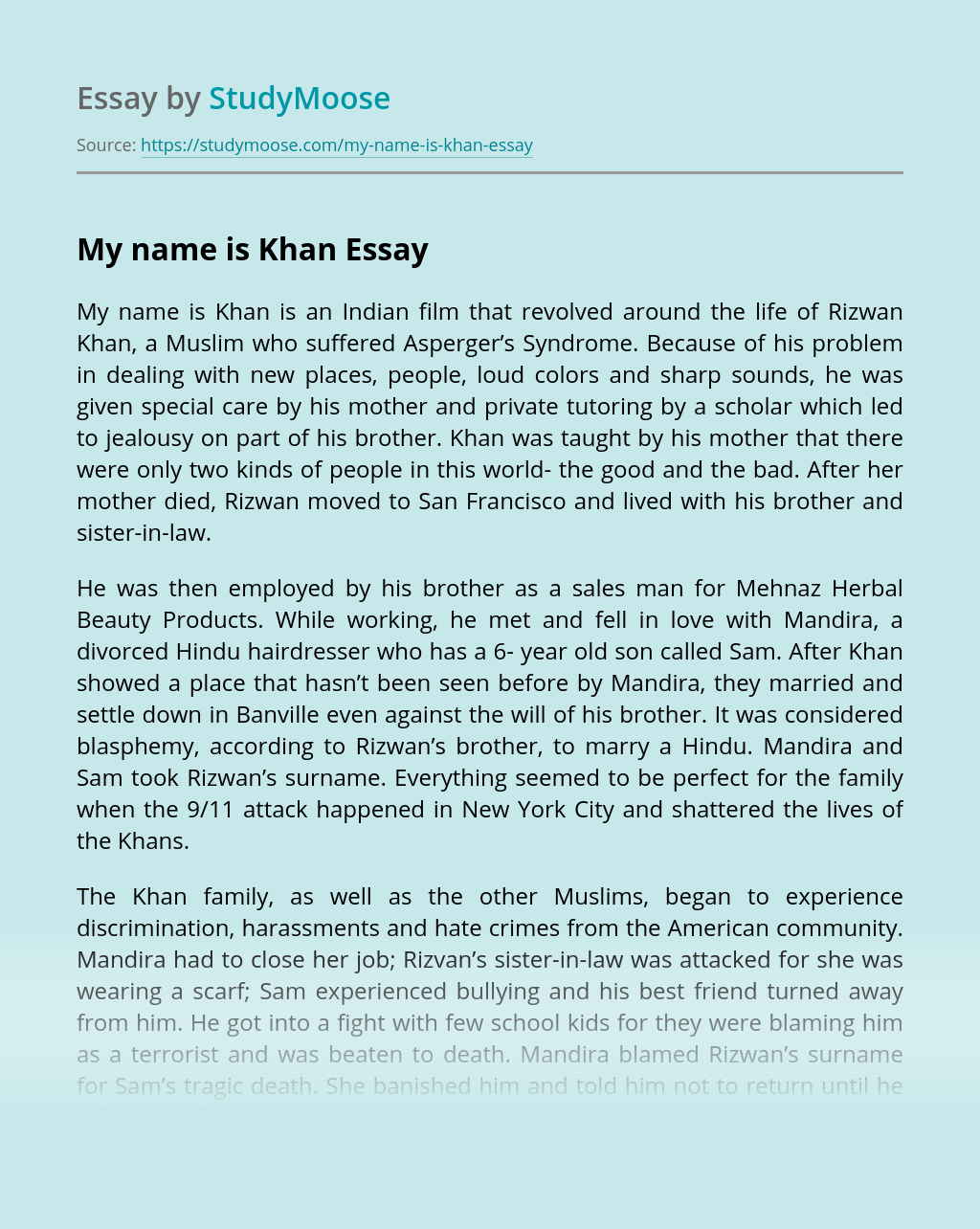