When I was a kid, I couldn’t wait until I was old enough to get a job. Sure, it would be a good way to make friends and learn how to prepare myself for the real world, but for me, it was mostly about making my own money. Having to ask my parents for cash every time I needed some annoyed me, mostly because they’d always say no. Every time they did, I would always whine and complain about how different things would be when I had money of my own, how I would never ask them for anything, and so on.

Don't use plagiarized sources. Get your custom essay on
“ My First Day at Work – Personal Narrative ”
Get custom paper
NEW! smart matching with writer

This wasn’t entirely true, but at the time it seemed like a smart thing to say. I must’ve applied to dozens of jobs, and when I finally got the email telling me that I needed to come down for an interview, I was excited. Sure, the job was only seasonal, but hey, at least I was finally going to have my own cash.

After the interview was over with and I’d filled out the appropriate forms, I was ready to start my first day at my store, Things Remembered. My gut was all tied up in tangles as I nervously approached the store, hoping to make a good first impression. The store was bright, and the ceiling was covered in halogen lights that lit up the displays. Display signs littered the store to the point where they were almost overwhelming, almost as if the whole store was trying to yell out “Hey you, that jewelry box is free with every single purchase you make in the store! So buy something!”.

Water globes littered the entire right half of the store; from waving cats to a snowman whose head was the water globe, that store had them all.

Two people stood by the dog tag displays, arguing rather loudly about which dog tag was better. In the distance, one other person was frantically talking on the phone to a friend, practically begging him for help on what to get his wife for their anniversary. Unfortunately, as soon as I entered the store I ended up walking into a display sign. The two people by the dog tags of course pointed at me and laughed. Sure, it was a rough start. But hey, it could only get better. My manager was a bubbly, middle-aged lady named Susan, who cheerfully introduced herself to me and got me down to training right away.

The first thing I had to do was read a manual that was about 3/4th the width of your average college textbook. I groaned as she handed it to me and told me to be done within an hour. Good old Susan. It only took me an hour and a half to do it, too. After I was done with that, I was given some tips on dealing with customers; nothing I didn’t already know: smile and politely greet anyone who walks into the store, ask them what occasion they’re shopping for, and try to get a sale. Seemed easy enough to me. Oh, but that wasn’t all I had to do on my first day. Between helping customers, I would also have to learn to use the engraver, the very heart and soul of the store.

Everything in that store could be engraved, so I needed to at least learn how to use “The Engravinator,” as everyone in the store called it. So I was given a small metal plate, with different shapes on it- hearts, circles, ovals, squares, rectangles and even a star. Susan handed me a piece of paper with different sentences on it and told me what to engrave on what shape, once she’d taught me how to use the machine, of course. At this point, the pressure was starting to sink in.

My palms were sweaty, and this voice kept yelling at me in my head, “Hey I know it’s your first day, but you better do the best you can otherwise you’re gonna lose this job, man!” However, right before I could even start engraving, I heard a lady call for help at the register. Right as I turned around to greet her, she slammed an album down onto the counter and started yelling at me. She was complaining about how terrible the engraving and store service were, and demanding a full refund. All the while I stood there terrified, with no idea what to do and no one to ask for help, because Susan was in the back.

Before she was even done, thankfully, Susan came out, apologized for the inconvenience, and gave her a full refund. She told me to take five and not to worry about engraving today. The rest of the day, all I did was work on my sales skills and help put out inventory. It wasn’t until the end of the day that Susan pulled me aside and gave me some good advice. In her words, “People in the store are going to drive you mad.

They are the pickiest, finickiest folks I’ve ever seen. But if you keep a smile on your face, keep calm and do a good job, you’ll survive the day, and we’ll get along just fine.” Even though it wasn’t exactly the greatest advice ever, it was what helped me keep my sanity the whole season I was there. I made some good friends, good money and I realized that working isn’t as easy as it seems. But all in all, it was a good job, and a good experience. 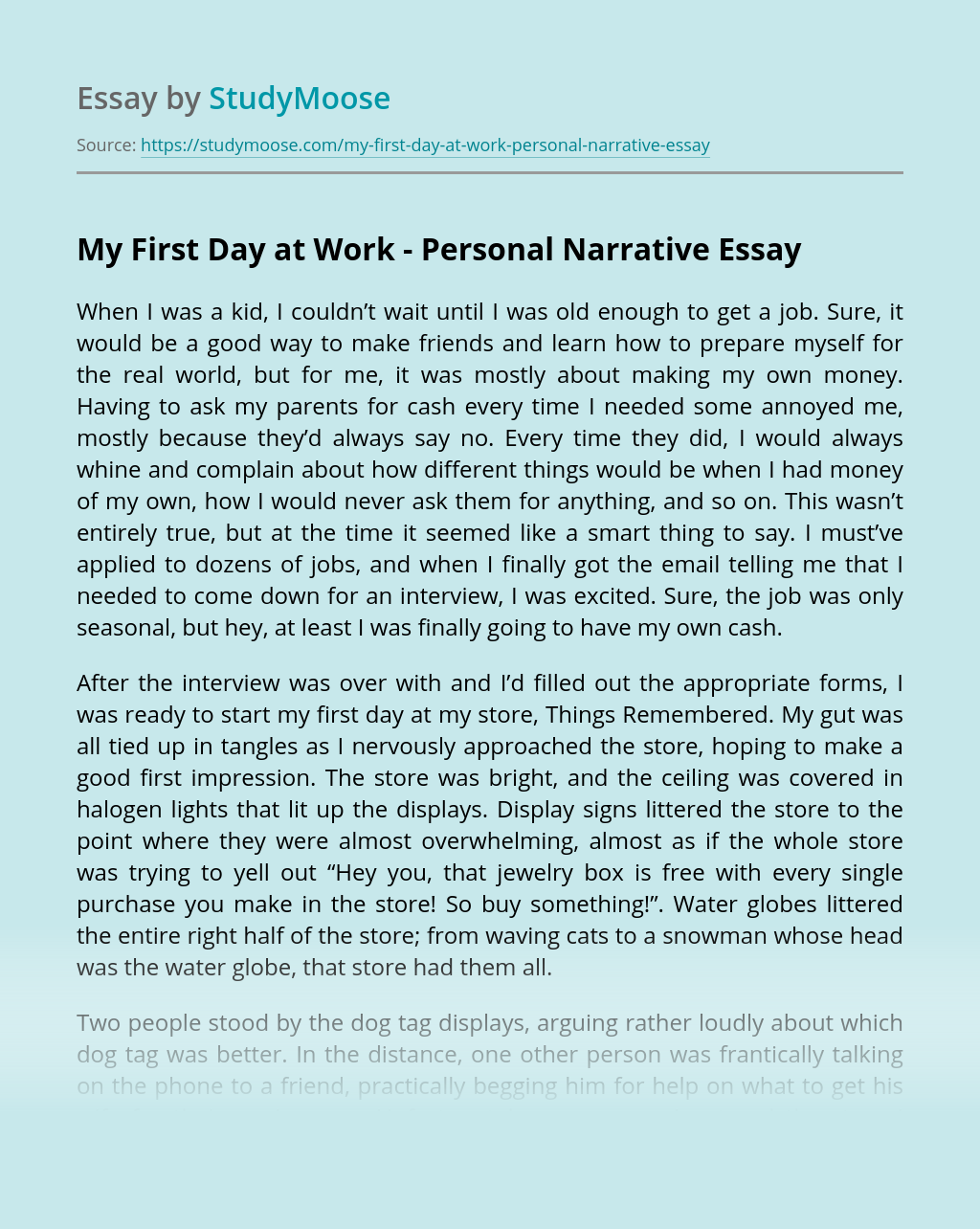