“Because everyone has a dream.” A line my mother always told me whenever I asked why people became successful in life. And I’ve always wondered what having dreams contributed to them being successful. And now I know the answer. People took these dreams as their guide to a brighter and better future. These people worked hard and sacrificed so much just to make their dreams come true. Inventors, scientists, mathematicians, Bill Gates and many more; people, big and small, have dreams.

Don't use plagiarized sources.
Get Your Custom Essay on My Dream Career Just from $13,9/Page

People’s dreams can come in any forms commonly what they want to be when they grow up. There are hundreds, thousands or even millions of career you can choose from. From simple ones to the more complicated ones. Because of this, people will be confused for they’ll have a lot of options to choose from. Like many people, I, myself, am confused and I often ask myself, “What do I really want to be when I grow up?” or “What career is really fit for me?”

I started dreaming of becoming a nurse when I was still 6 years old because I wanted to help sick people.

By the age of 10, I told myself that someday, I will be a great teacher and that I will teach everyone to read and write and count. And as I was growing up, my dream career also changed into something more complicated until I already thought about the one I’m certain with.

Recently, as I was reading a book, I saw a list of careers for people alike. I scrolled down the list until I saw two careers that really caught my eye: GEOLOGIST and PHYSICIST. I was amazed by how only a few people became famous in these fields. I began to infer that these two careers must really be difficult but that thought didn’t stop me from wanting to try it when I reach college. But I’m an indecisive person so I spent almost every day thinking about which I should go for and suddenly, an idea popped in my head: “Why not try both?” I did encounter Geophysics in our lessons. And that’s how I made it as my dream career.

I’ve always had Math and Science as my 2 top favorite subjects in class. Physics involves both Math and Science. I’ve also been fascinated about the planet where we’re living in, its structure, composition and everything that involves Earth. That’s what Geology is all about. So when I grow up, I want to be a Geophysicist, a person who studies the physics and physical processes of the Earth. I want to discover things about our planet that were never discovered before. I want to answer the unanswered questions and explore the mysteries of Earth. It’s amazing how scientists in this field do these things I mentioned and I became more interested when I saw other Filipinos and their contributions to Geophysics helping people all over the world. And that’s what I intend to do. I want to help people ease their curious minds and to make things easier for them especially in time of devastations and catastrophes.

Why It Is Worthy To Pursue Your Dream

I know being a Geophysicist isn’t some child’s play. I know it takes more than knowledge and skill to be a Geophysicist. I know that a simple mistake could be the end of it. And I know most of all that I need to make sacrifices, minor and major ones. But I’m more than willing to take those risks if it means reaching my dreams and my future. People may scoff at my dreams or may pull me down, but I am not backing down nor giving up. Because I believe, even though it may sound cliché, that someday, with hard work and with the Lord’s guidance, my dreams will definitely come true. 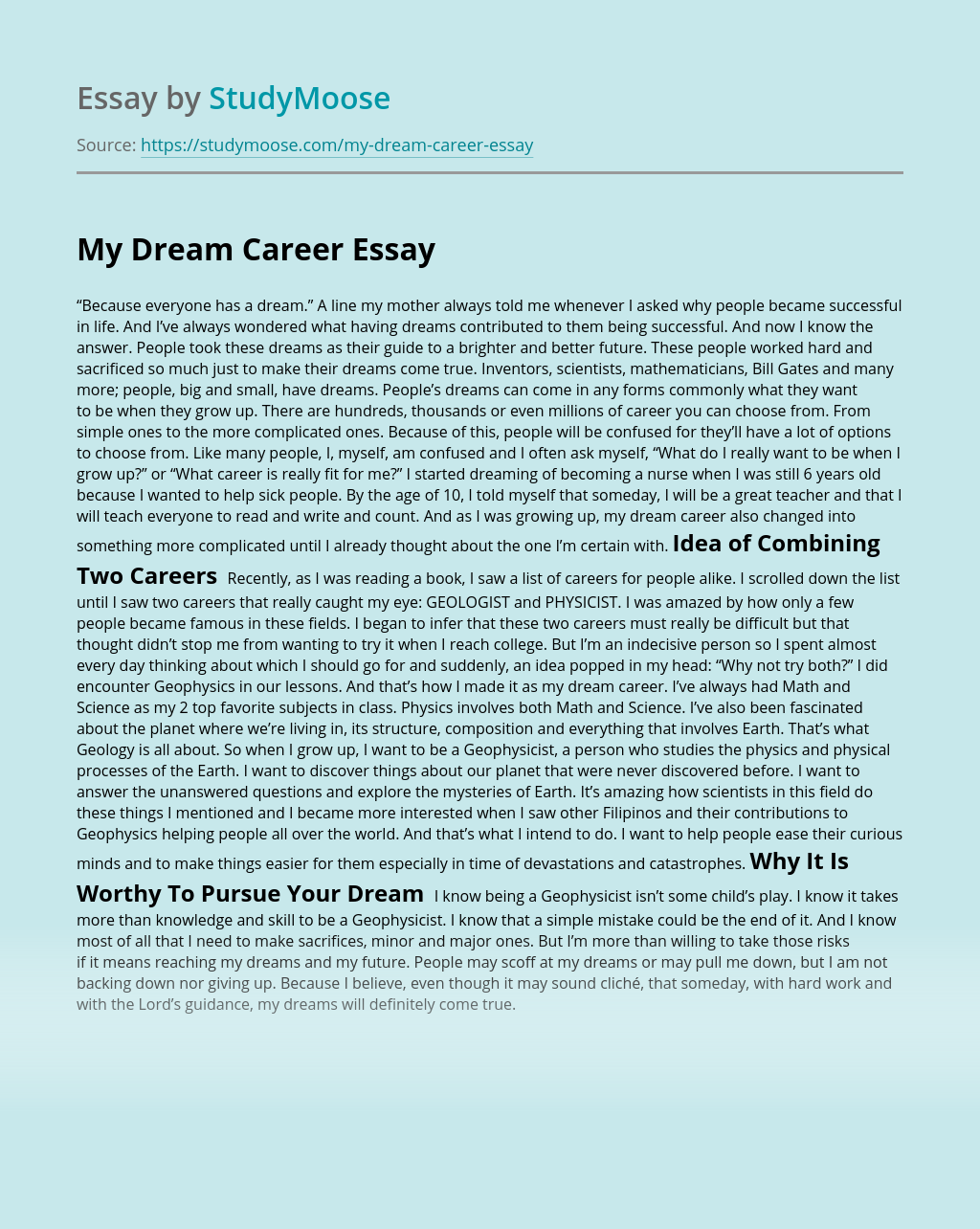 Have you ever asked yourself how you are different from your friends? I did and I found out that me and my friends are different in many ways for example I am calm, I have different dreams to a good soccer player, and I have my very own room First of all, I am different... VIEW ESSAY

High and Low Comedy are two features of the comic theatre branch of the performing arts. The incorporation of both aspects of comedy into the widely popular play written by William Shakespeare “A Midsummer Night’s Dream” is a key point in why it remains extremely popular to this day. As high comedy and low comedy... VIEW ESSAY

View sample
Get Essay
A Letter to His Parents by Dr. Jose Rizal

PSYCHOANALYTIC CRITICISM Psychoanalytic criticism: * It adopts the methods of reading. It argues the literary texts, like dreams, express the secret unconscious desires and anxieties of the author. * A literary work is a manifestation of the author’s own neuroses. * It usually assumes that all such characters are projections of the author’s psyche. *... VIEW ESSAY

View sample
A Dream within a Dream: A Critical Analysis

A Dream within a Dream, by Edgar Allen Poe, is a poem with its central themes being sorrow, loss, confusion and frustration. The poem is divided into two stanzas, each with a different setting but both closely interconnected. It begins with the narrator kissing his lover upon their “parting” (line 2). He ponders whether everything... VIEW ESSAY

I.INTRODUCTION Many people are interested about the meaning of their dreams, dreams that occur in different time, different situation and ways. It was an intriguing topic for most people, specially psychologist.Many spend much time and effort studying the space of dream and also it connects to sleep and brain. There are lots of proven evidence,... VIEW ESSAY