Journalist Responsibility after My Date with Blind Date

Journalist Nicola Gill wrote the article “My date with Blind Date” in the Cosmopolitan. Nicola posed as a contestant on the programme Blind Date to expose how it was made. In her article Nicola immediately tried to gain and hold her audiences attention by the bold, large font title, “My Date with Blind Date”. This title is clever and catchy so it grabs the attention of people who like Blind Date, as they would enjoy the gossip of the show, and people who dislike Blind Date, as they could be proven right about their thoughts of the show being faked.

Don't use plagiarized sources. Get your custom essay on
“ Journalist Responsibility after My Date with Blind Date ”
Get custom paper
NEW! smart matching with writer

The subtitle at the top of the page is very attention drawing as the readers want to here the secret under cover news that no one else has. “Exclusive undercover report”. These words are secretive and show that the journalist was dishonest to get the report, which makes it make it more exclusive. The extended subtitle is a brief on the article; it says how successful and big the show is to sells article to the reader “20,000 people fight to get on it”, “Behind those famous screens”.

This subtitle is also thought provoking so the reader reads on in the article and find out the behind the scene secrets of the show.

The article is introduced in a short paragraph about the type of Blind Date hopefuls that audition for the show “… make their stab for stardom, love, sex or at least a free holiday. ” The rest of the article is written in a series of steps so it is broken up and easier to read, another reason why it is written in a series of steps is that the age group the article is aimed at is ages 18-30 so most of the people who buy the magazine would be on their way to work, so when they are commuting to work they would read one or two steps then pick up were they left off and read the other steps when they have time.

Nicola describes Blind Date being put together in a series of six steps. Step one is the first interview; the show is faked here as they choose contestants who aren’t really desperate in the terms of that they need to go on a dating show to get a date. This is show when the producer asks, “So Nicola you’re a bit of a man eater are you? ” He also puts Nicolas form on the opposite pile to Janine’s, a single mother who has a sad tale of violent relationships and failed dreams.

The producer chooses someone who is confident and flirty – some one who has no problem getting dates. In step three Nicola finds is told to come up with nine questions from which two questions will be chosen and the third question will be given by the team. The audience would normally presume all the questions were thought of by the picker. The pickees were given Nicolas questions an hour prier to the show and left with a researcher to think of answers.

Before Nicola would walk down the famous stairs to meet Cilla and odd thing happened, the make up-girl went to see the three “pickees” then returned with organised gestures made to Fiona the researcher of the numbers of the pickees, she crossed out one and two but left number three. Nicola wrote in her article “As far as I can see – it’s as if I’m supposed to see”. She was right, it was an indirect way of telling her to choose number three, but Nicola had read the signs wrongly the make-up girl was actually underlining number 2.

This is shown at the end of step four when Fiona leaps at Nicola and hisses, “You were meant to pick number 2! ” This proves that the contestants of Blind Date make hardly any decisions; they are told what to ask their pickees and how the pickees should give their answers, they are even told or manipulated who to pick as their dates. Which is surprising as the point of the show is to choose their own date and to see if they get their dream guy or girl. I think this part of Blind Date is faked as it would be easier to write and rehearse one set of lines rather than three.

In step five the suspicion of the same holiday being in all the envelopes is confirmed as Nicolas holiday had been pre-booked for weeks, it would also cost a lot of money and time for Blind Date to pay for lots of different holidays and make short notice cancellations. The holiday they had shown to the audience and home viewers was not genuine as Nicola and her date had spent less than 15 minutes on the mountain bikes, the rest of the time they were driven to their destinations. Nicola and her

Date were also asked to film every thing they did a number of times so it didn’t always look spontaneous. In step six Nicola returns to the studio for her final interview, which is also staged as she is given a line to say which leads to her final humiliation that fits Nicolas subtitle to step six. “I’m told again and again I should say – the biggest difference between me and Paul is that I’m the kind of girl that like surprises and he isn’t” this is were Cilla turns to Nicola and confronts her about being a Journalist for the cosmopolitan.

Nicola is humiliated in font of the audience but afterwards Cilla and the rest of the Blind Date team with the exception of Martin the assistant producer who states “We’re just very disappointed on you” are very calm and forgiving, most of all the producer Chris who gave Nicola a huge hug and asks “When’s the article coming out? We can’t wait to read it? ” I think the producers of the show were upset that Nicola had betrayed them and that’s why they got their revenge with the public humiliation.

I also think Nicola deserved the public humiliation as she deceived many people who worked on the show and abused their trust, her date must have also been humiliated as he found out Nicola was journalist in front of a live audience. I think Nicola was justified in the way she obtained her story as even though she lied to get onto the show and lied throughout the show about her identity, she did it to get the total truth about Blind Date. If Nicola did tell the truth about herself she would either of not have been let on the show or the producers of Blind Date would have run a dummy show and made it look less faked.

Journalist Responsibility after My Date with Blind Date. (2017, Aug 06). Retrieved from http://studymoose.com/my-date-with-blind-date-essay 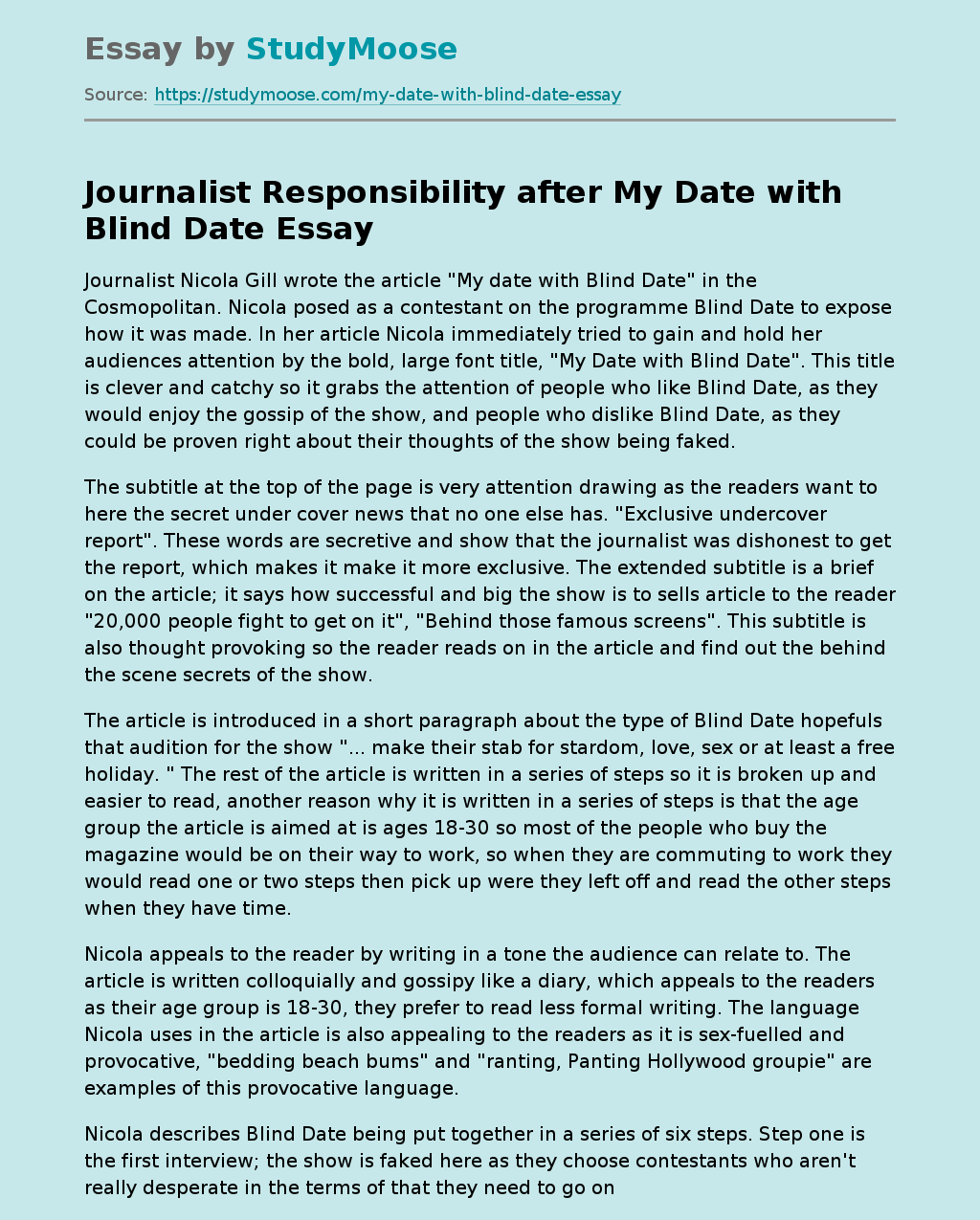